Though it took place in the ‘90s, the story of Richard Jewell – a hapless security guard thrust into the national consciousness after a terror attack – feels particularly relevant in the age of the internet and social media. It is the story of a man instantly lauded as a hero, and just as quickly derided as a villain, with every inch of his life picked apart by both the media and the FBI, who are both happy to latch onto a very convenient suspect. Following on from the likes of American Sniper and Sully, Richard Jewell continues director Clint Eastwood’s fascination with the complexity of heroism and its after effects.

Prior to the 1996 Olympic Games in Atlanta, Richard Jewell (Paul Walter Hauser) was just an anonymous rent-a-cop with a deep reverence for law enforcement and big dreams of protecting and serving. Then in 1996, while working security at a concert in Centennial Park, he intervened in a fatal bombing, likely saving hundreds of lives and becoming an overnight celebrity in the process. The media instantly raised Richard to hero status, inviting him on every news station and talk show in the country to discuss his heroics. But in no time at all, FBI agent Shaw (Jon Hamm) and dogged reporter Kathy Scruggs (Olivia Wilde) go all in on the theory that Richard himself is the bomber. His background and character make him the perfect fit for an FBI lacking any real suspects and a media desperate for the juiciest story they can cook up.

It’s a chilling depiction of how quickly someone’s life can be dissected by the media and how false accusations can quickly become seen as the truth; it doesn’t matter that Richard is innocent, the minute the newspapers and talk shows plant the seed that he isn’t, it’s too late, which is a sentiment that resonates in the age of social media. Whether Eastwood is going for that or not is a different story, as the film largely feels like another critique of both a morally repugnant press and a group of establishment bureaucrats seeking to tear down an American hero. Shaw’s presence at the bombing lends some shades of grey to the FBI plotline, as his pursuit of Richard feels like a man trying to assuage his own trauma and guilt, while attempting to restore some professional pride. The press side of things is less balanced, portraying Scruggs as a caricature of a cut-throat journalist who’ll do anything for a scoop, including sleeping with Shaw

Where the film is most successful though is in its depiction of the ordinary folks dragged into this media storm, particularly Richard himself who Hauser imbues with such empathy, honesty and humanity. Hauser has impressed in small roles in I, Tonya and BlacKkKlansman, always as a dimwitted, redneck sidekick but he finds nuance and pathos in his first leading role; the FBI and press may see someone who fits their profile, but thanks to Hauser, we see the human being beneath that. Kathy Bates gives a similarly sympathetic performance, building to a powerful, moving scene late in the film that earned her an Oscar nomination on its own. As Richard’s friend and lawyer, Watson Bryant, Sam Rockwell gives one of his most endearing turns, putting a weary spin on his sassy charm and finding a sweet chemistry with Hauser.

As with much of Eastwood’s recent output, Richard Jewell is clear-eyed and sturdy, presenting simple emotions and straightforward sentiment. But along the way, this story of an underdog up against giant establishments, grows increasingly gripping and ultimately becomes very affecting. There’s a quiet power in its humanist portrayal of some very endearing characters thrust into a nightmarish but all too relevant scenario. 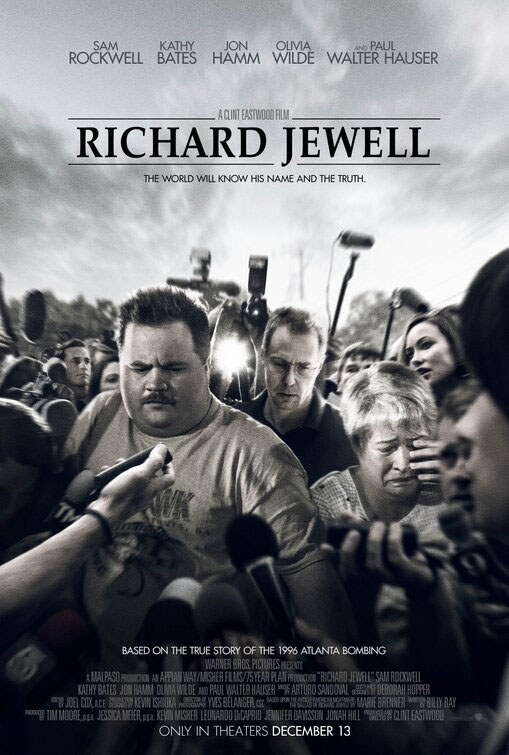