Remakes and reboots have become such a fixture of the movie release schedule that rather than bemoan the death of original cinema – it’s still there if you look for it – it’s easier just to accept their existence and hope for the best. It may be that the bar has been set so low by limp retreads like Total Recall that any half-decent remake feels like a success, but Jose Padilha’s remake of Paul Verheoven’s 1987 cult classic RoboCop is better than it has any right to be.

It’s 2028 and global conglomerate Omnicorp has pioneered the use of drones, using them in the military overseas for years. In the US however, the public are uneasy with the thought of robots carrying firearms and patrolling the streets, asking the question: what does a machine feel when it pulls the trigger?

In order to turn public opinion and get their robots on the streets, shady Omnicorp CEO Raymond Sellars (Michael Keaton) has a plan: merge man with machine to create a drone with a human at its centre. Enter Detroit cop Alex Murphy (Joel Kinnaman). After a car bomb leaves him in critical condition, he becomes the perfect candidate for Sellars and he’s soon being turned into the titular cyborg by the morally compromised Dr. Norton (Gary Oldman), who keeps control over Murphy, letting him be just human enough to keep the public onside with Omnicorp’s plan.

What’s admirable about this incarnation of RoboCop, and keeps it from being another dud on the remake scrapheap, is Padilha’s refusal to just retread the same story. From his Elite Squad movies, it’s clear that Padilha is a filmmaker with ideas and he wisely doesn’t try to match Verhoeven’s sledgehammer satire and twisted humour, instead bringing things up to date and commenting on US foreign policy, drone warfare and biased media outlets, led by Pat Novak (Samuel L Jackson), an over-the-top talk show host who’s one-sided rants are scarily reminiscent of Fox News.

Novak’s appearances offer a welcome respite from what is otherwise a very sad story. Murphy is dismembered but unable to die, while his wife (Abbie Cornish) and son struggle to reconnect with the remains of their husband and father.

Despite Padilha’s refreshing take on the material and slick direction, there’s barely anything here that’s memorable. Only a couple of scenes spring to mind: the first time Murphy wakes up as RoboCop is nicely rendered and a frenetic action scene set in the dark is impressive. The rest ranges from solid but forgettable to bafflingly stupid, particularly a scene involving a man with robotic hands playing guitar.

The cast is key to raising this one above other remakes, like 2012’s dismal Total Recall. Oldman, Jackson and Keaton are all on good form and are joined by Jackie Earle Hayley as a sinister weapons specialist, Jay Baruchel as a slippery marketing yuppy and Jennifer Ehle as a sharp Omnicorp exec. Poor Abbie Cornish does well with what she’s given but come on, isn’t about time to give her something more to do than just cry?

Ultimately, this update of RoboCop isn’t a classic to rival the original but it’s a respectable try. Padilha’s solid direction and a strong supporting cast add some weight to an otherwise generic, though watchable, action effort. 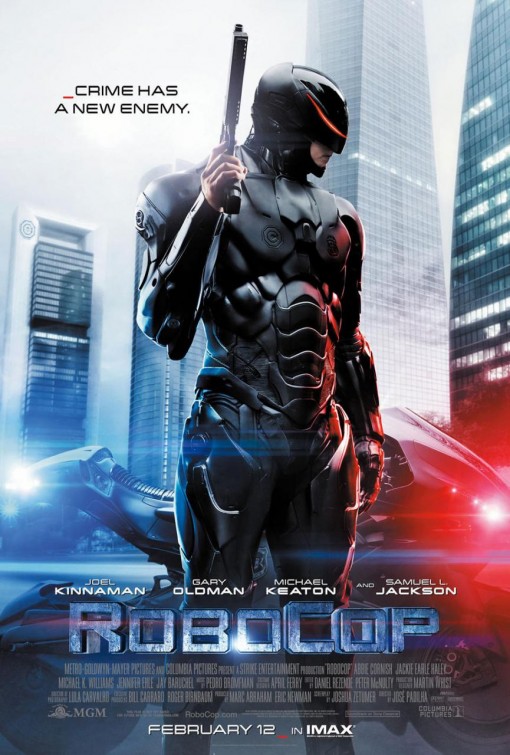