The first of many planned spin-offs set in the Star Wars universe, Gareth Edwards’ Rogue One has the freedom to explore different characters and a fresh aesthetic without having to further the saga of the Skywalker family. Unfortunately, it’s also a prequel, tasked with filling the gap between Episode III and Episode IV, so the outcome is set in stone from the beginning and Edwards – either of his own doing or due to the studio – fills the film with nostalgia, from small fan-pleasing nods to the ghoulish resurrection of major characters, at times with jarring results.

Last year’s The Force Awakens managed its nostalgia well, leaning into it when necessary but still establishing a new crop of heroes to take the series forward. While Rogue One obviously has a different mandate, it still uses the pull of the past to paper over the deficiencies in both its plot and its new characters. It feels like the film is hedging its bets between being a standalone story set in this universe and having enough fan service in it to keep everyone happy. It’s no spoiler to reveal that Darth Vader is in this film and while his appearances are both brief and largely extraneous, they are also the most memorable in the film, which says a lot about how the new characters fare.

Those new characters are the band of rebels who stole the plans to the Death Star, getting them into the hands of Princess Leia and kick-starting the events of the original Star Wars. They’re led by reluctant hero Jyn Erso (Felicity Jones) and morally dubious intelligence officer Cassian Andor (Diego Luna). Jyn wants no part of the rebellion but wants to find her father, Galen (Mads Mikkelsen), who was taken by the Empire and forced to design their planet-destroying weapon. Along with ragtag band of rebels, Jyn and Cassian lead a heist on an imperial stronghold to procure the plans and give the rebels an advantage in the ongoing war against the Empire.

Though Jones and Luna are both great talents and are always watchable, neither one has much to work with here beyond well-worn Star Wars stock characters: the scrappy orphan and conflicted hero, respectively. Both characters’ motivations seem to just change whenever the plot requires them to, rather than shifting in an organic, believable way and any chemistry between them fizzles out rapidly. Thankfully, the cast of characters supporting Jyn and Cassian add some interest to the rebels, from former imperial pilot Bodhi (Riz Ahmed) to blind ninja Chirrut Imwe (Donnie Yen) and his bruising backup Baze Malbus (Jen Wiang). There’s also K2SO (Alan Tudyk), a reprogrammed imperial droid with a good line in sarcasm that is on hand to provide the occasional laugh.

What most impresses about Edwards’ film is the world that these characters inhabit and the way he shoots it. He manages to make the film feel part of the same universe as its predecessors, with familiar shots of X-Wings zipping in and out of hyperspace and overdressed imperial officers squeaking around shiny hallways. But here there’s added grime, focusing on ground-level characters as they do battle in the mud and the sand of various different picturesque locations. The update in the effects could have lent everything here a digital sheen but instead the ships and equipment feel suitably grubby and battered, giving a crucial lived-in feel to this world.

Given that the majority of the film is comprised of long, drawn out action sequences, the fact that much of it is adequate rather than thrilling results in large sections feeling sluggish. It’s a well-worn device in Star Wars to cut back and forth between two or three concurrent set-pieces and in previous films these have all developed characters through action. Think Luke’s battle with Darth Vader in The Empire Strikes Back or Rey’s final showdown with Kylo Ren in The Force Awakens. There’s nothing of that level in Rogue One, which instead mixes war movie tropes with the well-worn standards of the series, while struggling to integrate the character beats with the explosions. It will come as no surprise that not everyone makes it out of this movie alive and while there are one or two affecting moments of sacrifice, many of the third act’s emotional beats fail to land.

Ultimately, Rogue One is a serviceable action movie and while it does a solid job of exploring the Star Wars universe from a slightly different angle, it is still too beholden to the pre-existing story and leans heavily on older characters to feel as fresh as it could’ve. The end result is a film that passes the time nicely between the main instalments but never really feels like essential viewing, adding very little new insight to the story as we know it. 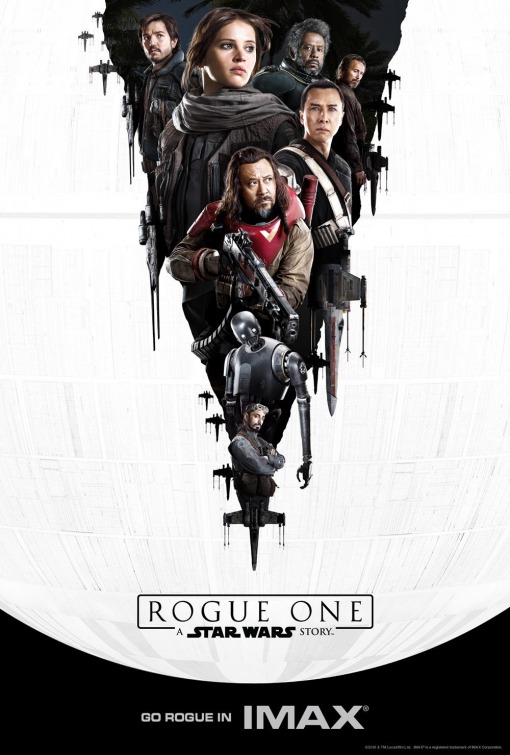