Room is the polysemic title of Lenny Abrahamson’s devastating drama in which a mother and her young son are confined to a single room, day and night, and yet room is one of the many things they are denied. The story, adapted from her own novel by Emma Donoghue, is fictional but feels ripped from the headlines with so many similarly tragic and harrowing stories coming to light in recent years.

The room the pair are trapped in is a rickety garden shed and Joy (Brie Larson) has been there for seven years after being kidnapped by a man she refers to as Old Nick (Sean Bridgers). Her son Jack (Jacob Tremblay) has been with her for five years and doesn’t know anything other than this place the pair have come to call Room, the way we would say Earth.

Joy has found a way to explain their world in a way that makes sense to Jack, from convincing him that everything outside of Room is outer space and that nothing they see on TV is real, even the people who are just made from colours. All that’s real to Jack is his mother and the contents of Room that he cherishes, from a lamp to an old melted spoon. Then there’s Old Nick who to Jack is a God-like figure; he isn’t sure if he’s real or not but he appears to drop in and deliver the things that Jack and his mother need.

One of the most heartrending aspects of Room is seeing Jack essentially be a happy, normal kid in this horrendous environment because he doesn’t know any better and doesn’t fully understand what’s going on. He watches cartoons and runs around playing games like any other kid would and it’s all just normal to him. Finding a child actor who can convey the complex emotions involved here was never going to be easy but Abrahamson and casting directors Robin D. Cook and Fiona Weir found nine-year-old Jacob Tremblay, who gives one of the all-time great child performances. He is natural and believable, coping brilliantly with the complicated adult material and never giving into precocious movie moppet tropes.

While she does her utmost to protect Jack and keep him happy, Joy is almost completely broken. She is the one who has to bear the harsh reality of their situation, which includes being raped on a nightly basis, a horrifying ordeal that thankfully Abrahamson has the smarts and sensitivity not to voyeuristically revel in. Larson, who was so hugely impressive in 2013’s Short Term 12, gives a raw, honest and heartbreaking performance, imbuing Joy with so much strength and resilience without ever letting us forget the constant pain and anguish she is suffering.

Now, if you haven’t seen the trailers or any marketing for this film and want to remain as unspoiled as possible, look away. The following paragraphs will spoil some plot details that come to light later in the film.

Around the midway point of the film, the dynamic shifts significantly when Joy and Jack make it out of their makeshift prison, tricking Old Nick to get Jack out of there in an escape scene that’s nail-bitingly tense since the stakes could scarcely be higher. Once they are out in the real world, Jack obviously struggles to adapt to the massive rooms, wide open spaces and all of the strangers who are so keen to speak to him.

For Joy it’s a different feeling altogether. She still bears the emotional scars of her treatment at the hands of her captor and Jack, who she loves more than anything, will always be a reminder of that. Upon returning home to her parents Nancy (a brilliant Joan Allen) and Robert (William H Macy), who have divorced since her disappearance, she is confronted with the memories of an old life she’ll never have back and the opportunities she has now missed out on.

It’s difficult for her parents too and they cope in different ways, with Nancy and her new partner Leo (a casually loveable Tom McCamus) doing their best to welcome Joy and Jack back to the world but Robert can’t do it. He struggles to even look at his daughter and her son, eventually checking out of the situation completely.

Room is a film that features so much grim and wrenching material but is ultimately more hopeful than its subject matter might suggest, with Abrahamson ushering us from a relentlessly dark situation to one where they may be some light at the end of the tunnel. The Irish director manages to avoid both the impenetrable miserablism and the overly syrupy sentiment that could’ve sunk this film, ultimately finding the right tone for such a powerfully moving story. 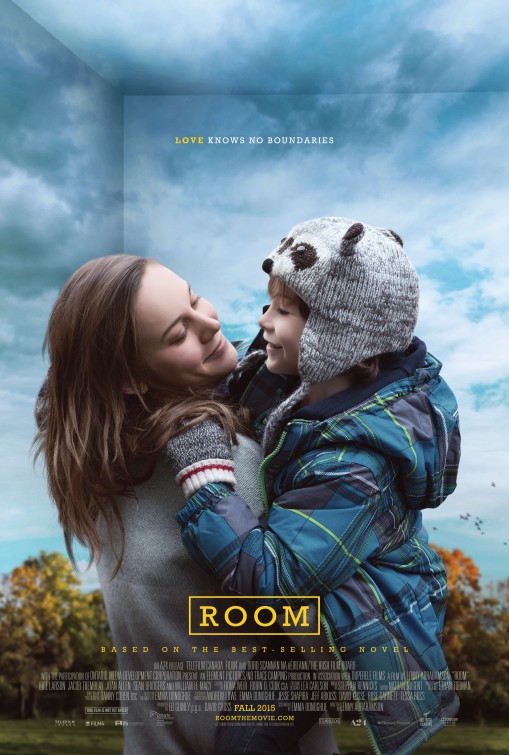