The women behaving badly genre has really exploded in recent years and rightly so, why should men get to have all the fun? Bridesmaids kicked off a slew of films about female friends partying hard, giving The Hangover guys a run for their money. Following hot on the heels of this year’s Girls Trip  is Lucia Aniello’s Rough Night, which feels like a literal mash-up of Bridesmaids and The Hangover – with a little bit of Weekend at Bernie’s thrown in – as a wild bachelorette party gets out of control.

The bride to be is Jess (Scarlett Johansson), an aspiring state senator whose schoolteacher friend Alice (Jillian Bell) is desperate to relive their college escapades, organising a weekend of debauchery in Miami. Along for the ride are their college buddies Frankie (Ilana Glazer) and Blair (Zoe Kravitz), and Pippa (Kate McKinnon), Jess’ friend from a year abroad in Australia. The five pals head to Miami with a duffel bag full of penis-shaped products and a mandate to get royally wasted but things take a deadly turn when an accident leaves the girls with a dead stripper on their hands.

Though some of the early scenes feel awkward, Rough Night is at its best when it’s exploring the dynamics between the five friends, who all bounce off of each other well. Each of the characters have gone in different directions since college and those new tensions begin to pile up on some pre-existing grudges. Alice in particular is struggling to accept that her long-term best friend not only doesn’t have much time for her anymore, but has another best bud in the form of Pippa. There’s plenty of comedy to be mined from this scenario but once there’s a dead body on the scene, the bulk of the humour comes from physical comedy and grander set pieces that – as ever – just aren’t as funny as the more character-driven material. Some of the broader stuff works, particularly around the fringes of the film, like the subplot involving Jess’ fiancé (Paul W. Downs, who also co-writes with Aniello) driving across country, hopped up on expired Russian aderol, to save his relationship.

The best material however, comes from the dialogue between the five friends and it’s a pity they weren’t allowed to riff with each other a little more. With a background in improv, Bell is a dab hand at sharp one-liners and brilliant off the cuff gags and for the most part, the main quintet hang with her. Though her character only really exists to further drive a wedge between Jess and Alice, McKinnon, steals virtually every scene she’s in, milking her Australian accent for all it’s worth and generally operating on a different comedic wavelength to everyone else. If there’s a weak link, it’s actually Johansson, who feels slightly miscast as a straight-laced, slightly nerdy would-be Hillary Clinton. She never seems at home with the material the way someone like Anne Hathaway would; it isn’t a bad performance per se, but it doesn’t feel like a natural fit.

This is Aniello’s feature debut after doing a lot of work on TV, most notably as a writer and director on the excellent Broad City – also starring Glazer – which is perhaps a better showcase for her talents. Rough Night is a much more structured and straightforward piece, hitting the obvious beats just when you expect it to hit them. In between those beats however, is an interesting study of female friendships and the challenges of maintaining well-worn relationships around busy adult lives. It’s a pity that didn’t take centre stage ahead of the high-concept plot and steady stream of gross-out gags and big set pieces, but there’s just enough here to prevent the film living up to its title. 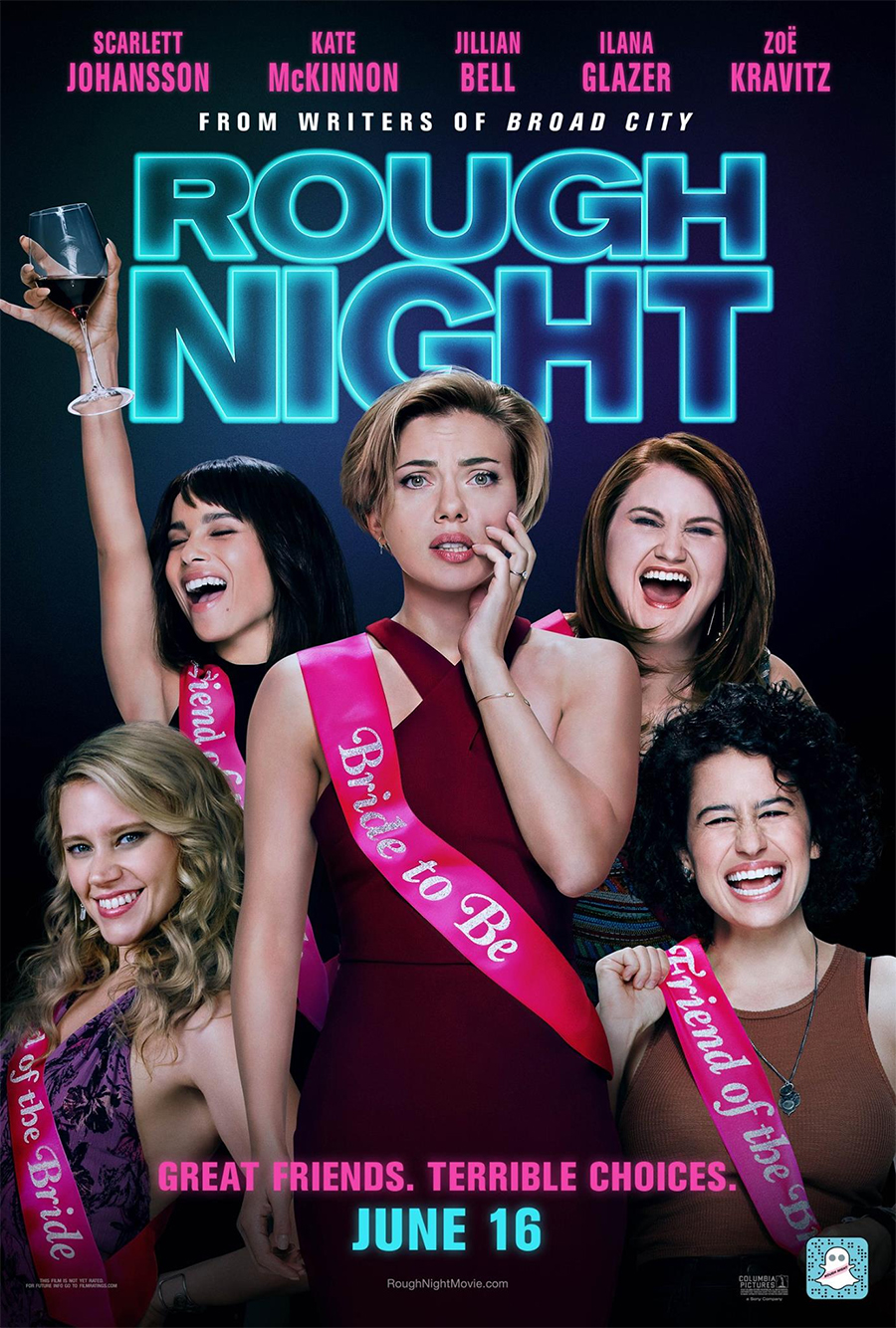