They say the definition of insanity is trying the same thing over and over again and expecting different results, so after seeing espionage snooze-fest Unknown and dull airplane hijack thriller Non-Stop, you might be insane to expect anything other than a convoluted mess from Run All Night, the latest in the ongoing collaboration between Spanish director Jaume Collet-Serra and star Liam Neeson. It’s a mildly pleasant surprise then that this father-son crime drama is a more watchable affair than the duo’s previous efforts.

Neeson’s ability as an action star is something of a myth, perpetuated by the ongoing appreciation of Taken and the fact he continues to ride that wave with a couple of action films every year. But the first Taken aside, these films are routinely terrible and Neeson doesn’t exactly excel in them. He’s far better as the grizzled, suicidal huntsman in Joe Carnahan’s wilderness survival flick The Grey as the taciturn detective in Scott Frank’s grubby noir A Walk Among the Tombstones.

Run All Night skews closer to that film than it does the Taken series, with Neeson playing a low-level, veteran criminal named Jimmy Conlon. Jimmy’s a drunk, haunted by the crimes of his past, particularly the murders he’s committed for lifelong best friend and mob-boss-gone-legit Shawn Maguire (Ed Harris). He’s also estranged from his son Mike (Joel Kinnaman), an earnest family man who mentors kids during the day and drives a limo at night.

On a routine ride, Mike comes into contact with Shawn’s loose-cannon son Danny (Boyd Holbrook) and sees something he shouldn’t have. Things go from bad to worse and so begins a cat-and-mouse game across New York City as Jimmy steps in to protect his son from Shawn’s goons, corrupt cops on Shawn’s payroll, a ruthless contract killer (Common) and a straight cop (Vincent D’Onofrio) with a serious grudge against Jimmy.

Where this film succeeds that Unknown and Non-Stop didn’t is its simplicity. Perhaps it’s due to the script, which comes from one screenwriter (Out of the Furnace scribe Brad Inglesby) rather than the three who scripted the overcooked, preposterous plots of the previous films. Run All Night is a comparatively straight-forward story, touching on sins-of-the-father themes, that lets Collet-Serra apply a modicum of flair to some solidly staged action scenes, even if the use of shaky-cam is still overdone.

The script does take a few missteps though, which all seem to revolve around Common’s hit-man. The character feels unnecessarily and unrealistic, being thrown into the plot late-on and given a couple of pivotal action scenes that are both far too long and far too silly. With his night-vision goggles, laser-sights and seeming invincibility – not to mention a last-minute, out-of-character bout of talking killer syndrome – he feels like a character from a different film.

Otherwise, the gritty, grounded plot and action are a good fit for Neeson’s revenge-thriller credentials and he gives a strong, soulful performance. The baggage of his violent past weighs heavy on him and that’s evident in Neeson’s face as his character looks for last-minute redemption and reconciliation with his son. It helps that he has a worthy foil in friend-turned-enemy Ed Harris and the two share the film’s best scenes. The obligatory Neeson phone call scene sees Jimmy break some awful news to Shawn that essentially ends their friendship and both men are fantastic. Their relationship and the performances from two veteran actors raises this material up a notch whenever they are on screen together.

Collet-Serra and Neeson are hardly the new Scorsese and De Niro but Run All Night shows that with the right script, the pairing can produce a serviceable revenge thriller. 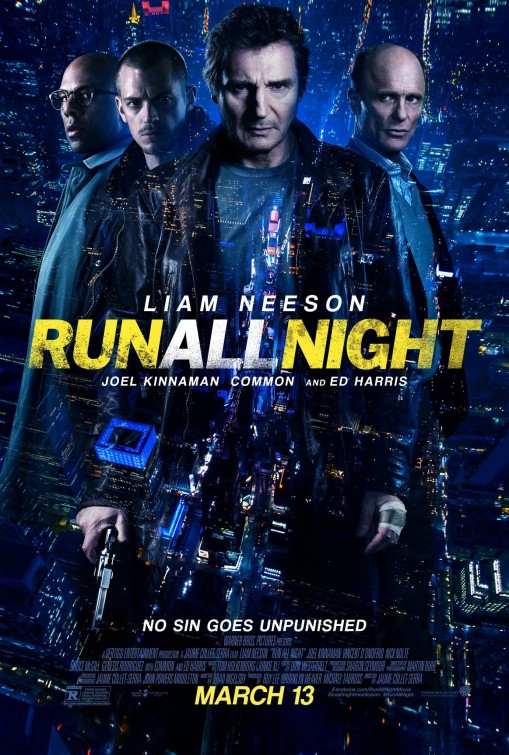