Formula One isn’t a sport that is mined for cinematic gold all that often but in Rush, director Ron Howard’s second collaboration with Frost/Nixon screenwriter Peter Morgan, all the risk and excitement of the sport is dazzlingly brought to life. Much like their previous film though, it’s the central rivalry that sparks the ignition on this formulaic yet immensely entertaining sports flick.

After a couple of altercations in the lower divisions, the rivalry between chalk-and-cheese drivers James Hunt (Chris Hemsworth) and Niki Lauda (Daniel Bruhl) came to a head in the 1976 Formula One season. Hunt is all reckless abandon, a boozy womaniser whose willingness to take extreme risks on the track gives him an edge over most opponents. Conversely, Lauda is meticulous in his preparation, setting up the car himself, avoiding alcohol and eating right, dedicating himself to the sport in a way that made him a prototype for the athletes we see today.

It’s a classic clash of personality: Lauda can’t understand why Hunt is content to focus on partying more than racing and Hunt just can’t fathom why Lauda puts in so much work without ever letting his hair down. But deep down, both men envy the qualities of their rival and are driven by an overwhelming desire to better him at every opportunity, whether it is on the track or exchanging barbs prior to the race.

The central performances from Hemsworth and Bruhl are the film’s biggest asset and the two men are crucial to why this rivalry is so compelling. Hemsworth is given the more archetypal role as the flippant playboy Hunt and no doubt his considerable charisma is perfectly matched with the character but he also successfully imbues Hunt with enough depth to make him seem more than just a flashy cliché.

It’s Bruhl who gets the juicer role though and the German shines, giving a brilliant performance as the spiky Austrian, finding plenty of humour in Lauda’s bluntness and gradually revealing the vulnerability that lies beneath the pragmatic, rational exterior, making Lauda an incredibly watchable and ultimately very endearing character.

While Rush works exceedingly well as a dual-character study of polar opposites finding they understand each other better than anyone else, Howard doesn’t skimp on the action either. Formula One in the 1970’s was a sport so dangerous that two drivers per season died on the track and that deadly risk is captured well in some exhilarating race sequences, beautifully filmed by Anthony Dod Mantle. None moreseo than the climactic Japanese Grand Prix, the rain soaked track is filmed as beautifully as any scene this year and Howard effectively ramps up the drama on the track, leading to an astonishing finish to the season that racing fans will know is coming but is still no less shocking.

Unfortunately, the film continues after that point to find the only real bum note in the script as Hunt and Lauda come face to face after their career-defining season to lay out the lessons they’ve learned – and subsequently the themes of the film – in a clunky dialogue scene that threatens to cheapen what has come before.

Howard is a director that’s often taken for granted, perhaps because of his workmanlike style but he’s a safe pair of hands and a solid storyteller. Rush may well be his best film to date, taking a great story and turning it into a smart, mature and, above all else, wildly entertaining double biopic covering one of sport’s greatest rivalries. 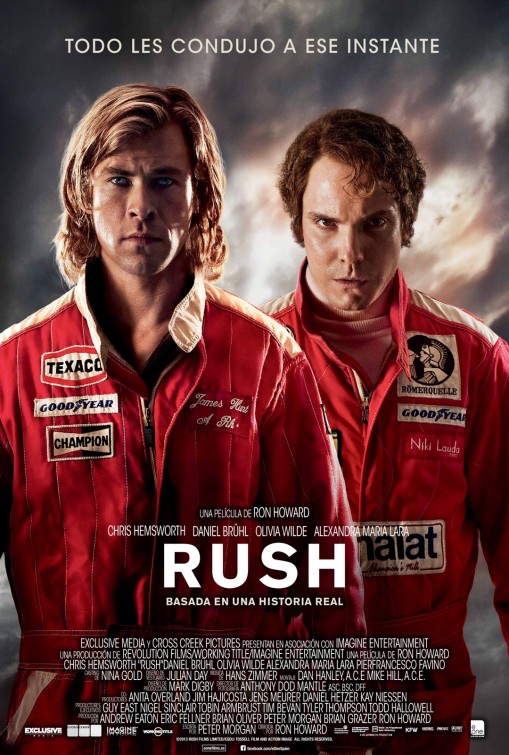