Exploring the well charted waters of CIA corruption, Swedish director Daniel Espinosa’s Hollywood debut Safe House is far from original but thanks to some frenetic chase sequences and an engaging cat and mouse game between its two leads, it proves to be a solid, gritty thriller.

Set in South Africa, David Guggenheim’s screenplay focuses on young agent Matt Weston (Ryan Reynolds), eager to be a field agent but stuck with the thankless task of answering phones in a CIA safe house in Cape Town. That is until the arrival of legendary CIA operative and infamous traitor Tobin Frost (Denzel Washington) arrives after turning himself into a US consulate to escape some well armed mobsters who seek to get hold of the film’s Macguffin: a file in Frost’s possession which contains intel on thousands of top intelligence officials across the globe.

Weston’s safe house is soon under attack and he has the unenviable task of “looking after his house guest” who happens to be, as some clunky exposition early on tells us, an expert in psychology and a master manipulator. Frost immediately begins to get into Weston’s head as the pair escape the safe house and head for the next available sanctuary, all the while chased by the mob who seem to know their every move ahead of time.

From that point onwards, the film is essentially one giant chase sequence, be it Weston chasing Frost, who has a habit of escaping, or the bad guys chasing both of them, either way it barely stops for breath. In that respect, the film suffers from diminishing returns as chase after chase starts to become tiresome stretched across the bloated two hour run time. That’s not to say individual scenes aren’t entertaining, there’s a lot of frantic action scenes that work well here, all shot in Bourne-style shaky cam with quick cuts and extreme close-ups. The fights are particularly well handled with some real gritty, intense bouts where each blow is felt.

Washington and Reynolds are both on solid form here, making quite a lot of fairly underwritten roles without much meaningful dialogue to chew on. Washington’s character is built up before we even meet him and he relies on his well practiced charisma to live up to the hype the movie bestows upon him. Reynolds has more to do here and is convincing as a rather green agent being taken through the wringer by this whole scenario while his charge is clearly playing games with him. Raising the stakes for Reynolds’ character, the screenplay throws in the cookie cutter girlfriend (Nora Arnezeder), a gorgeous French nurse who, as we see in some more clichéd set up, is madly in love with him and can’t keep her hands off him.

The dynamic between the two agents begins with Washington using and abusing Reynolds early on before the younger man’s persistence and guts eventually, and predictably, lead to some begrudging respect and the pair begin to bond despite knowing they are both aiming for very different outcomes.

There’s nothing particularly wrong with Safe House, it’s just the whole affair is predictable from start to finish and virtually every scene feels like something that’s been done a thousand times before it. It’s all handled well on a technical level, coming off as a Tony Scott thriller mashed with the Bourne trilogy, and acted well by it’s two leads as well as a strong supporting cast featuring Brendan Gleeson, Vera Farmiga and Sam Shepard. It’s a solid effort that presumably achieves what Espinosa and co set out to achieve, it just suffers from a generic plot and lack of any real ambition to be anything more. 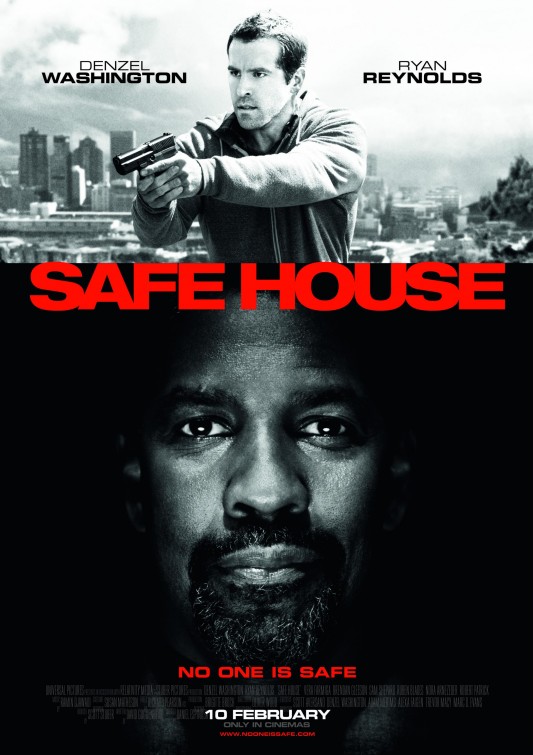