Directing her first feature after writing 2008’s indie noodler Nick & Norah’s Infinite Playlist, Lorene Scafaria returns to familiar ground with another madcap road trip story, Seeking a Friend for the End of the World. Things are considerably darker this time around as attempts to stop an asteroid hurtling towards Earth have failed and in three weeks time the world will be destroyed.

Steve Carrell stars as mild-mannered insurance salesman Dodge, whose wife has just left him upon hearing of the impending Armageddon. Lonely and depressed, Dodge still heads into work everyday to kill time while his best friends Diane and Warren (Connie Britton and Rob Corddry) throw parties and try to find him someone to see out the rest of his days with.

Dodge has no interest in meeting someone new and spending the next few weeks getting to know them. That is until he stumbles across his kooky, newly single neighbour Penny (Keira Knightley). When a vicious riot breaks out, Dodge and Penny escape the city and decide to go on a road trip in search of Dodge’s high school sweetheart and a plane to get Penny back to England to die with her family.

Along the way, the pair begin to bond through the bizarre situations that they find themselves in, including a creepy cult restaurant called Friendsies and a trucker who plans to commit suicide by proxy.

Bringing the same hangdog charm that is quickly becoming his trademark, Carrell is perfectly cast and gives a performance that adeptly balances laughs with moments of touching subtlety. On the flipside is Knightley, miscast as a loopy bohemian and giving a typically overwrought performance. Next to the subtlety of Carrell, her straining for laughs and endless mugging makes you long for the natural charm of an Emily Blunt or Amy Adams.

The central relationship between the two however is sweet and often surprisingly convincing as they grow closer to an overly predictable climax that is overblown and soppy but hard not to fall for, particularly after an excellent cameo from Martin Sheen.

After a first act that plays as a dark satire that brings plenty of morbid end-of-the-world laughs, it’s a shame that Lorene Scafaria can’t balance that with the sugary-sweet turn the film takes in the third act. The shift in tone, though gradual enough to avoid being completely jarring, leaves the film feeling disjointed.

Despite the slightly muddled tone, Scafaria does a good job of handling a potentially big topic like the end of days with black humour and sentimentality by zoning in on two people and telling their whacky little story. Carrell’s sad-eyed performance holds everything together and ensures there won’t be a single dry eye in the theatre come the saccharine finale. 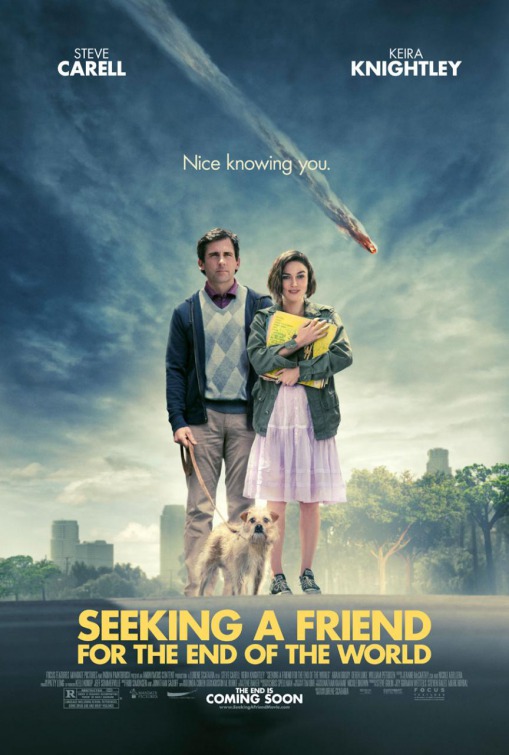