Considering Hollywood’s love of biopics, particularly those about great men who shaped history, it’s surprising that it has taken this long for someone to tackle Martin Luther King Jr, the massively influential figure at the centre of the civil rights movement in 1960’s USA. However, rather than a conventional and syrupy run down of King’s life, Ava DuVernay’s Selma is a powerful and passionate account of the civil rights marches King organised in Alabama in 1965, from Selma to the state capital of Montgomery.

Despite the constitution stating that everyone has the right to vote, Southern states in the 1960s still made it almost impossible for African Americans to vote, as DuVernay and screenwriter Paul Webb establish early on with a scene of Annie Lee Cooper (Oprah Winfrey) being denied registration by a white registrar after failing to name all of Alabama County’s 67 judges. With barely any of the black population being allowed to vote and juries being chosen exclusively from registered voters, racial brutality often went unpunished by the all-white juries.

This ongoing injustice leads King (David Oyelowo) to the Whitehouse, where he presents his case to Lyndon B. Johnson (Tom Wilkinson), who is sympathetic but would rather side-line the civil rights movement and come back to it at a more politically convenient time. But King isn’t willing to wait so organises a non-violent march from Selma to Montgomery, in the process inciting a very public confrontation with the Alabama state troopers on the Edmund Pettus Bridge that saw unarmed black protestors beaten and battered.

What’s striking about Selma is how DuVernay avoids presenting King as just the inspirational historical figure but instead presents a fully rounded and nuanced character, unafraid to show King’s weaknesses and doubts. We see plenty of the King we’re familiar with, standing tall in front of a crowd and delivering his stirring rhetoric – though notably these aren’t his real speeches, the rights to which would’ve cost DuVernay a cool $20 million – but the film also depicts less familiar sides to King. Primarily, we see King the politician and tactician, working with his team to carefully orchestrate the marches, giving a real insight into the planning and strategy that goes into every march.

We also get a look at King’s relationship with his wife Coretta (Carmen Ejogo), who isn’t afraid to call out her husband on his infidelities. Ejogo isn’t given all that much to do but she is phenomenal in one of the film’s most powerful scenes as she coaxes a quiet confession from a guilt-stricken King.

As King, Oyelowo deftly handles both the loud, bombastic speeches and the quieter, more personal moments with dignity and naturalism. His standout scene is a visit to the grieving grandfather of a young man shot and killed during a night march in Selma. It’s a rare moment where King is lost for words and Oyelowo takes a telling moment of stillness, a quiet pause to compose himself and find the right words to console this man who greets him with reverence even in the face of such tragedy. Oyelowo is convincing as the powerful leader but the weight of that position is always apparent in his performance.

DuVernay’s career so far has been relatively low-key, with only well-reviewed but little-seen indies I Will Follow and Middle of Nowhere on her feature film resume. Selma is a big step up from those solid but slight dramas and will no doubt catapult DuVernay into Hollywood’s elite, even if she was cruelly denied what would have been a historic Oscar nomination for her work here.

Though she now has a more powerful subject matter and a bigger cast to work with, Selma retains much the same style as DuVernay’s previous outings, favouring a quietly grounded approach where many filmmakers would’ve gone for grandeur and overwrought melodrama. Her management of various different narrative strands is as impressive as her refusal to give in to biopic cliché, with her only use of such tropes coming in a postscript that reveals the poignant fate of many of the film’s key players.

Much of the publicity around Selma has been needless harping about historical inaccuracy and cries of outrage about its lack of Oscar nominations. Indeed the latter most likely represents a wider problem in Hollywood but this is a film that’s bigger and better than any of the controversy surrounding it. Given the events in Ferguson and ongoing problem of white-on-black violence, Selma is a vital and searing piece of filmmaking. 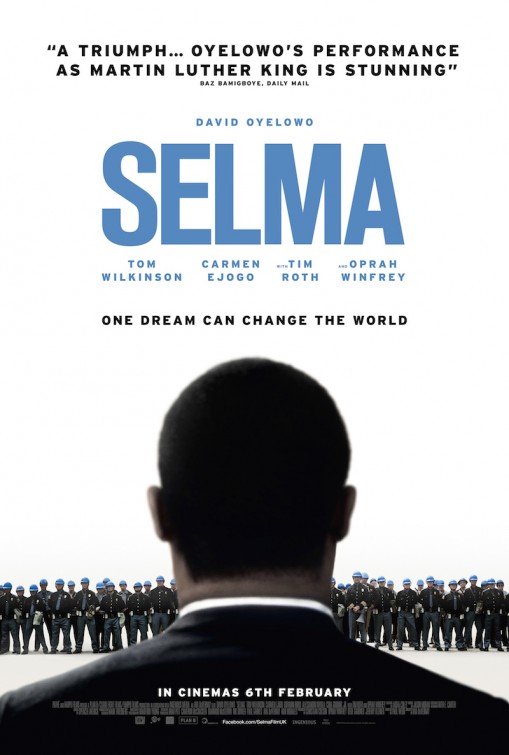