From director Asif Kapadia and writer Manish Pandey, Senna documents the life and career of arguably one of the greatest Formula 1 racing drivers of all time. But you need not know anything of this Brazilian driving ace nor even be a fan of Formula 1 to enjoy this engaging documentary.

Although Ayrton Senna’s life and achievements are already well known this film lifts the veil on the political world of F1 and admits the viewer into Senna’s private family life. Like Touching the Void the end is already known but by the closing scenes of the film such is your admiration for Senna that you hope desperately for a different outcome.

The documentary itself comprises TV race footage, behind the scenes recordings from F1 races, family home-movies, TV appearances and latterly the scratchy but thrilling and terrifying cockpit camera shots from Senna’s car. The talking heads format of many documentaries is notably missing and this allows more time for racetrack and other more personal footage. One of the most revealing aspects of this documentary are the insights into the divisive and fractious drivers’ meetings before each race. Several times we hear Senna comparing the world of F1, ruled by money and politics, to the “pure racing” of his early go-kart days.

We see graphic evidence of Senna’s aggressive driving style, especially in his battle with fellow driver Alain Prost, and hear him defend it on several occasions, most notably to Jackie Stewart. His single-minded determination sees him fighting to get back into races after crashes that would have lesser drivers making the long walk back to the pits. In one sequence he finishes a race with his car stuck in sixth gear; a feat that was believed impossible. He won that race. Prost is painted the villain in this piece and their relationship degenerates from teammates to bitter enemies. In one tangle the difference between the men is graphically highlighted when after a crash involving the two of them Prost retires from the race but Senna digs himself out and goes on to take the chequered flag. But Senna fell foul of the internal politics and favouritism of F1 to be disqualified and banned at one stage in his career. All these events serve only to build the viewer’s respect.

There are insights into Senna’s private family life and his life in the public eye. In his native Brazil he became a national hero and a symbol of hope in their straightened financial times. We see also his strong belief in God and how that spurred him on to win and to give back to the people of Brazil.

This is a highly watchable, engaging and thrilling documentary. The footage is often poor quality but this does not detract from the experience of seeing it on the big screen; it only adds to the raw excitement. It would have been good to hear from more of the big names of F1 that knew him; people like Bernie Eccelstone, Michael Schumacher and other drivers but that may have stretched this taught documentary. Instead we hear from Professor Sid Watkins, the F1 doctor, who knew Senna well and from his immediate family. This is a rare documentary, one that plays out like fiction with a courageous and single-minded hero battling the pernicious and insidious forces of the establishment. Women adored him and men wanted to be him. He made a fortune and he spent it educating the children of Brazil. If this were fiction you would be forgiven for questioning the credibility of the characters and plot. 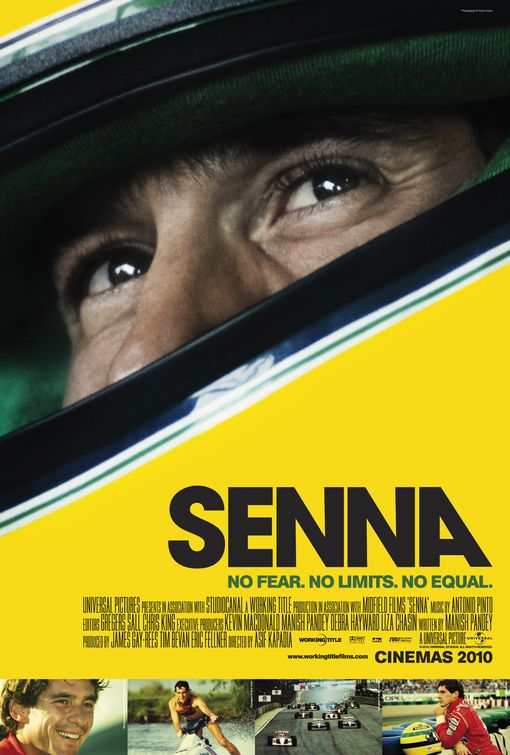