Throughout his career, Steven Soderbergh has proven himself one of cinema’s most versatile directors, hopping between a variety of genres, mixing conventional box office hits with heavyweight dramas, experimental indies and everything in-between. It’s only fitting then that his last cinematic release – if you believe his recent retirement claims – is Side Effects, a film that seamlessly shifts genre and tone numerous times throughout its run time.

The film opens with a tease – an ominous shot of bloody footprints on an apartment floor – then jumps back three months to find Emily Taylor (Rooney Mara) eagerly anticipating her husband Martin’s (Channing Tatum) release from prison after a stint for white-collar crimes. Despite the return of her husband and his promises to get them back into financial shape, Emily can’t shake off her depression and anxiety which eventually culminates in a suicide attempt.

Emily is assigned to a new psychiatrist, Dr. Jonathan Banks (Jude Law), who tries a couple of different anti-depressants before prescribing a new drug that’s still at trial stage. At this point, Soderbergh and writer Scott Z. Burns take a deep look at the prescription drug industry in the same way their previous collaboration Contagion delved into the effects of a global pandemic. Dr. Banks is a good, honest doctor but he isn’t immune to the advances of pharmaceutical reps offering a big payday to push their product. Although he is up front with his patients about this situation, is it really ethical to prescribe a drug on this basis? Would he recommend it if he wasn’t getting paid for it? This is probably the most intelligent and thought provoking section of the film, tossing up questions of ethics, morality and culpability, especially when there are massive side effects that lead to a media storm around Emily and Dr. Banks.

From there, Side Effects veers off in unexpected and unpredictable directions, stepping into Hitchockian thriller territory with a number of twists and turns piling up at every juncture and even a complete shift in protagonist. While Emily is the lead for the first half of the movie, the second half is very much about Dr. Banks as he transitions from calm and eloquent professional to a frazzled, unshaven conspiracy theorist obsessively trying to clear his name. It’s a strong performance from Law, his best in years, as he subtly conveys the gradual transformation of his character leading to a deliciously manic climax.

Alongside Law and essentially anchoring the whole film is Rooney Mara, giving an excellent performance as Emily. She’s shown before, most notably in The Girl With the Dragon Tattoo, that she has an appealing vulnerability but can also feel distant and cold which makes it hard to get a handle on her character and her motivations, making her a valuable asset to a film like this.

If Side Effects truly is to be the last film of Soderbergh’s eclectic career, it sees him at something close to his very best. With the skill of a master craftsman, Soderbergh perfectly manipulates the audience, operating within the framework of a standard thriller but toying with misdirection and directorial sleight of hand. The plot twists begin to stretch the bounds of what’s plausible and what isn’t but the film is so stylish, expertly paced and downright compelling that you follow right along with it. 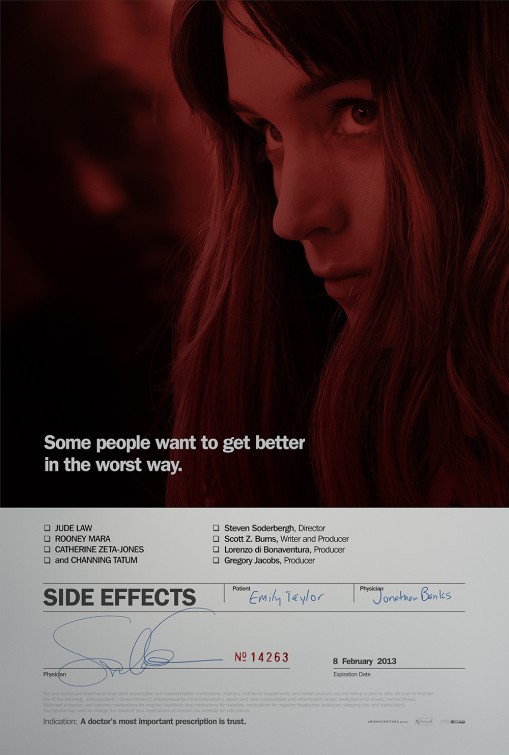