After 2003’s Open Water, a bare-bones thriller that gets by on isolated tension, husband and wife directing team Chris Kentis and Laura Lau return to similar territory in this shot-by-shot remake of Uruguayan horror La Casa Muda. Marketed as being filmed in one continuous take – though the directors have confirmed it isn’t by admitting to recutting the film after its premiere last year – the film is an effective exercise in creating real-time tension but is ultimately no more than a highly generic American horror film.

With a cast you could count on one hand, the film rests solely on the slender shoulders of Elizabeth Olsen, the star of last year’s fantastic Martha Marcy May Marlene, and here she brings credibility to a thankless role that not many young actresses could have. With the camera following her for the entire film, often right in her face, it’s a triumph that Olsen perfectly maintains her performance throughout.

Olsen plays Sarah, a young woman who is helping her dad and uncle fix up their lakeside holiday home before selling it. With the electricity out and the boarded up windows blocking out the sunlight, Sarah is soon left crawling around the darkened house after her father is left wounded by an anonymous attacker.

The camera traces Sarah’s movements in and around the house, never giving a glimpse of who or what is after her. While not actually shot in one take, the film is generally successful in giving the impression that it is. The opening shot, which begins over Sarah’s head by a lake and follows her through the garden and into the house, is particularly impressive. The real time gimmick and close-quarters camera work is effective in wringing a lot of drama from a very slight plot. Unfortunately that novelty wears off by the halfway point and leaves the film with nothing to hold it up, particularly as what little plot there is unravels during the nonsensical, anticlimactic reveal.

Like the majority of movies in this vein, any interest in the characters and the mystery around their plight is immediately wiped away by clumsy explanatory scenes in the final act and when the big twists are as generic, uninspired and implausible as they are here, it’s a particularly big mood killer.

Despite Olsen’s good work and some skilfully crafted terror, Silent House is ultimately let down by the lack of an intriguing plot to anchor the technical experiment. Directors Kentis and Lau clearly have technical flair but have yet to work with a script that can lend some substance to their style. Olsen meanwhile has survived the rite of passage that is the horror movie lead with her dignity intact and can now move onto the kinds of roles she deserves. 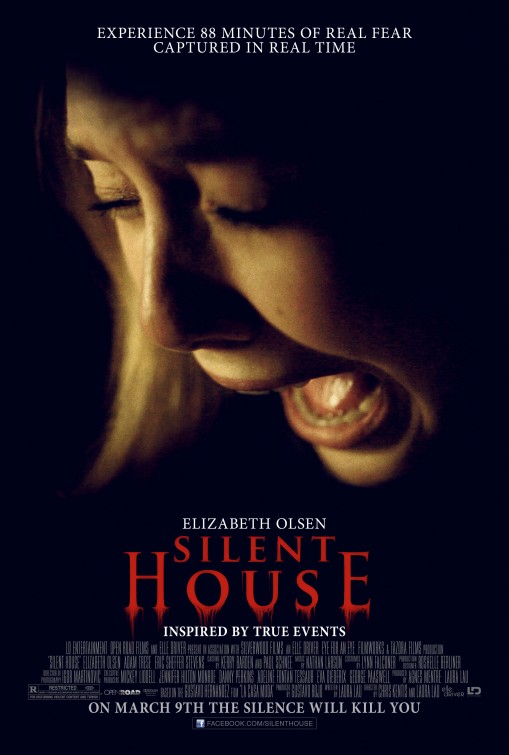