No sooner had Robert Rodriguez’s Sin City hit cinemas back in 2005 than people started discussing sequels and given he had the rest of Frank Miller’s novels to work with as well as a propensity for turning out films quickly and cheaply, it seemed like a no-brainer that a sequel would arrive sooner rather than later.

But after becoming sidetracked with throwaway grindhouse pastiches and 3D kids films, it has taken Rodriguez nine years to get around to Sin City: A Dame to Kill For. In the intervening years, hype for a sequel has all but dried up completely and the green-screen technology, that helped make the first film such a fresh and exciting project, has become commonplace. There’s a distinct feeling that the window for a sequel has passed us by but nonetheless we have A Dame to Kill For, a serviceable if slightly disappointing follow-up.

A Dame to Kill For takes a similar structure to the first film, mixing in an adaptation of the novel of the same name with a new story created specifically for the film. The new material focuses on Johnny (Joseph Gordon Levitt), a young hotshot gambler whose winning streak gets him on the wrong side of Senator Roark (Powers Boothe), leading to a bitter feud. This story segues into a revenge story as stripper Nancy (Jessica Alba), haunted by the grisly death of her protector/lover Hartigan (Bruce Willis), tries to work herself up to avenging his death by taking out Roark.

The bulk of the film focuses on drunk P.I. Dwight (Josh Brolin, replacing Clive Owen) and his destructive relationship with Ava Lord (Eva Green), an ex-girlfriend and consummate femme-fatale who comes back into his life looking for protection from her rich lover (Marton Csokas) and his sadistic henchman Manute (Dennis Haysbert, replacing the late Michael Clarke Duncan).

Casting is the biggest problem thrown up by the extended break between films. Dwight’s story lends itself to recasting its leading man since both the graphic novels and the first film establish that Dwight changes his face at some point. However suited Brolin is to the noir style, he never feels like he’s playing the same character that Clive Owen did in the first film and when his facial transformation does happen, the prosthetics and wig look slapdash and make Brolin look more like an odd caricature of himself rather than a close approximation of Clive Owen.

Other new additions to the cast fair better, particularly Green and Levitt, who are both perfectly at home in this world. In fact, Green seems born to inhabit this steamy, seedy world and she attacks this role with the same boldness and inhibition she brought to 300: Rise of an Empire earlier in the year.

The new faces in the supporting cast are impressive: Ray Liotta as a cheating husband; Jeremy Piven and Christopher Meloni as two detectives; Stacy Keach as a bloated, hideous mob boss; Juno Temple as an opportunistic hooker. They join old faces like Rosario Dawson, Powers Boothe and of course Mickey Rourke’s Marv, the bruiser with a heart of gold who is still a highlight despite his role here being considerably less interesting than last time out.

The excellent ensemble help bring Miller and Rodriguez’s dark, hyper-stylized world to vivid life. The style here is just as seductive as it was in the original film, shot in stark black and white, enlivened by splashes of vibrant colour, be it Ava’s green eyes or the splash of red blood from a gunshot. Though the novelty of the technology has worn off and the addition of 3D in unnecessary and often unpleasant, the film is still stunning to look at, lovingly recreating the frames of Miller’s graphic novels with a style and tone that’s unlike anything else we’re likely to see this year.

Good sequels tend to broaden their scope and expand their world. Sin City: A Dame to Kill For doesn’t do that – if anything it feels smaller – but it does deliver more of the same hard-boiled thrills you would expect from the series. It’s hard not to pine for what could have been had the film been made closer to its predecessor but you can only judge a film for what it is and on its own merits, A Dame to Kill For is a fun, sleazy trip through the dive bars and grimy back alleys of this nightmarish noir world. 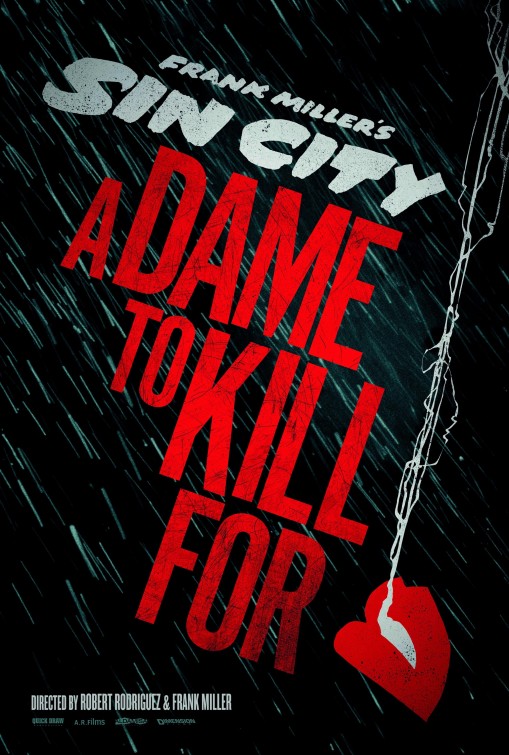