If Once was director John Carney’s raw, intimate debut album and Begin Again his overly glossy sophomore slump then latest effort Sing Street might just be his masterpiece. Blending the authenticity of Once with the broader scope and crowd-pleasing beats of Begin Again, the film brings together everything that’s great about Carney’s work: catchy tunes, likeable characters and tons of heart.

Set in Dublin in 1985, teenager Conor (Ferdia Walsh-Peelo) is forced to swap private school for Synge Street, a rough state school, when his parents (Aidan Gillen and Maria Doyle Kennedy) run into some financial trouble. Well-spoken, a bit too smart for his own good and lacking the requisite black shoes, Conor doesn’t make a good impression with anyone, from the school’s resident nutter Barry (Iain Kenny) to the stern principle Brother Baxter (Don Wycherley). But he does work up the courage to approach Raphina (Lucy Boynton), the beautiful but mysterious girl who hangs around outside the school. He tells her he’s in a band and needs a model for their upcoming music video. The only problem is: there is no band and no music video.

Conor pieces together Sing Street – a makeshift band, including rabbit-loving multi-instrumentalist Eamon (Mark McKenna) – and they manage to come up with a few catchy tunes and wonderfully ramshackle music videos. Thanks to older brother Brendan (Jack Reynor), a stoned burnout with a passion for music, Conor starts to discover the popular bands of the time and one of the film’s best recurring jokes is the rapidly changing music and fashion of the band as Conor gets into another band. First it’s roll sleeves, bleached hair and Duran Duran, then lipstick, a black fright-wig and The Cure. None of this goes down well with Brother Baxter.

The film’s songs – primarily written by veteran songwriter Gary Clark – are a wonderful spin on those bands, as well as the likes of The Jam, Hall & Oates and Joe Jackson, who all feature on a very listenable soundtrack. The breakout song – following in the footsteps of previous Carney gems Falling Slowly and Lost Stars – is rousing pop anthem Drive It Like You Stole It. The song gets performed in full during the film’s best scene, a beautiful fantasy sequence that sees the school’s dingy gym hall transformed into an American high school prom circa 1950 as Conor and co belt out the tune to their swing-dancing classmates.

While most of the musical scenes are joyous and sometimes laugh-out-loud funny, there’s also a darkness and melancholy to Sing Street that helps make it such a powerful film. Carney wonderfully mixes the massive highs and crushing lows of a teenage crush with the deep frustration of being stuck in a stifling environment, desperate to get out and start the rest of your life. On the fringes of that are topics like divorce, broken homes and casual child abuse as the film builds you up with the cheery songs before crushing you with the harsh realities facing these kids.

It’s telling that in the film’s closing credits, it is dedicated to ‘big brothers everywhere’ and as much as Conor’s romance with Raphina takes centre stage, the more affecting relationship is between Conor and Brendan. Brendan is a twentysomething drop out and his life has stalled, leaving him stuck in the house with his bickering parents getting stoned and listening to records. He’s determined not to let the same thing happen to Conor and pushes him to go for Raphina, to start a band, to play the school disco and eventually to get the hell out of there. Reynor has flirted with Hollywood but his best work has come in Irish dramas like What Richard Did, Glassland and now Sing Street. With straggly hair and a lazy beard, he looks like a high school athlete that’s slowly morphing into Seth Rogen but he delivers an honest, poignant performance that provides the film with so much of its heart.

There isn’t much of Sing Street that hasn’t been done before on the big screen; it essentially a coming-of-age, finding yourself teen movi, but Carney finds a unique and beguiling way of delivering these teenage kicks. There’s a warmth to all of Carney’s work that makes it immediately endearing and here he delivers teenage angst and heart-breaking honesty through big laughs and catchy tunes. 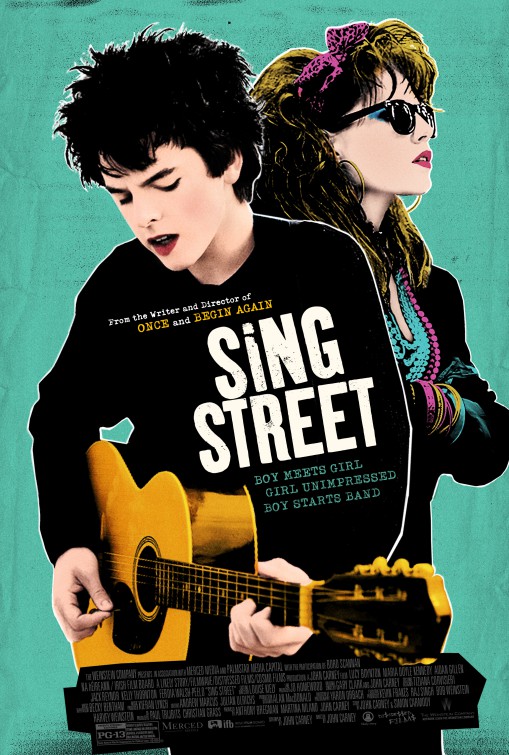