After the wit and whimsy of Tarsem’s Mirror Mirror, a fun but flimsy take on the classic Grimm fairytale, comes Snow White & the Huntsman, a decidedly more po-faced affair with a budget over double that of Mirror Mirror.

The film opens well with a swift account of how the stunning but morally questionable Ravenna (Charlize Theron) gained control of the kingdom from the beloved widower King Magnus (Noah Huntley) by seducing him, marrying him and murdering him all in the space of a couple of days. Now the Queen, the evil Ravenna locks the king’s daughter Snow White (Kristen Stewart) in a high tower until the day her mirror informs her that Snow has surpassed her as the fairest of them all and to retain her youth and beauty forever, she must consume the heart of Snow White.

The Queen sends her bizarre, semi-albino brother to the tower to murder Snow White but this isn’t the frail, damsel in distress we’ve seen in previous iterations. Snow manages to escape the kingdom and into the dark forest, a fantastically rendered gothic nightmare with branches that morph into snakes and mushrooms emitting hallucinogenic gasses, that serves as the film’s visual high point.

Snow White is rescued from the dark forest by the titular Huntsman (Chris Hemsworth), a degenerate drunk still heartbroken from the loss of his wife. After escaping the forest, the film takes a turn for the dull that it never truly recovers from as the pair embark on a seemingly never-ending journey.

This interlude takes in The Sanctuary, a stunning Princess Mononoke-inspired forest full of pixies, moss covered turtles and the famous dwarves, this time eight of them, played by a slew of well-known British character actors including Ian McShane, Ray Winstone, Eddie Marsan and Bob Hoskins. Despite the flashes of visual brilliance in the forest and the brief chunks of fun to be had from the dwarves, this whole section does nothing to advance the plot nor develop the one dimensional characterisations of Snow or the Huntsman. Despite some blatant hints that the Huntsman has a thing for Snow, their relationship goes nowhere and the addition of exceptionally bland childhood friend William (Sam Claflin) only serves to add further tedium to an increasingly saggy middle section. By the time the climax arrives, all interest in the characters and the generic plot they’re following is pretty much lost.

The cast are left with very little to work with, particularly Stewart whose Snow White is nothing more than a medieval Bella Swan, all lip-biting teenage angst as she becomes embroiled in the now-obligatory yet undercooked love triangle with William and the Huntsman, a pair so bland you’ll be longing for Jacob and Edward.

With Snow White & the Huntsman, first time director Rupert Sanders betrays his commercial background by essentially creating a series of stunning moments of impressive imagination and inspiration but there is nothing to tie it all together into an engaging film. The final result is a slick but hollow slice of mass-appeal blockbuster hoping to catch the Twilight crowd and make a huge return on it’s $170 million budget. 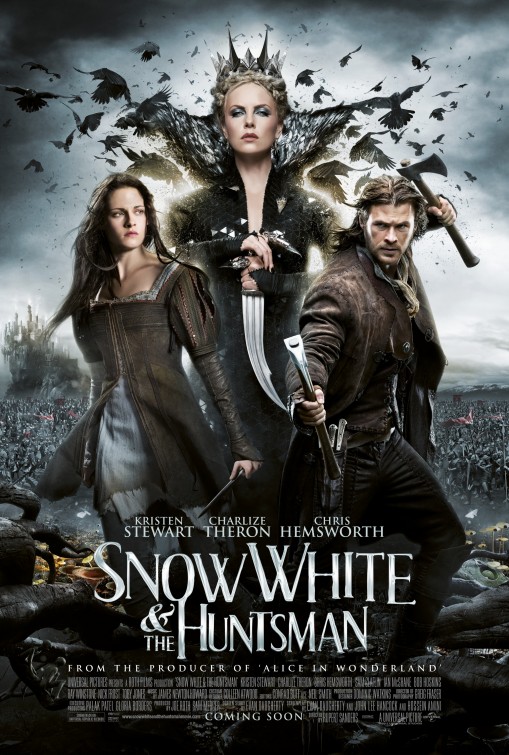