With its grimy milieu and murder mystery plot, Afonso Poyart’s serial killer thriller Solace feels like it would be more at home in the mid-nineties, amongst the likes of Seven, Fallen and Primal Fear. It wouldn’t be all that surprising if screenwriter Ted Griffin first thought the whole thing up sometime around 1996 and dusted it off after binge watching the first season of True Detective. Unfortunately, this is far from True Detective…

The film stars Jeffrey Dean Morgan and Abbie Cornish as two FBI agents investigating a series of strange murders that appear to be the work a serial killer who preys only on the terminally ill and manages to stay one step ahead of the FBI. To help them get a leg up, Joe (Morgan) enlists the help of his old friend John (Anthony Hopkins), a retired clairvoyant with a tragic past.

Of course, John doesn’t want to get involved but inevitably finds himself dragged into the game of the killer who appears to him – and us, revealing himself to be a barely-concealed Colin Farrell – in a series of cheesy cutaways littered with religious imagery and a brooding Farrell stalking what looks like the set of an old Marilyn Manson video.

Considering he doesn’t actually appear until the third act, it feels like Farrell’s involvement is supposed to be similar to Kevin Spacey in Seven but given he is splashed all over the marketing and all but entirely revealed in John’s visions, there’s no real shock factor when Farrell does crop up.

Until that point, there is some intrigue in the cat and mouse game as Farrell’s killer leaves behind clues and appears to be able to call what John and co will do before they do it, resulting in a battle of psychic wits with John that is at times enjoyable. Once Farrell is revealed however, it all gets a bit too silly, which is saying something for a film that has Hopkins using his psychic powers to bark directions during a car chase.

Hopkins, however, is the only really saving grace. He is clearly relishing the chance to ham it up in something this silly. As he has done so many times before, he gets to be the smartest guy in every room, always at least two steps ahead of everyone else and not shy in filling them in on the situation. He provides an injection of fun and charisma into an otherwise dour film that’s self-seriousness makes it at times laughable, particularly during its absurd denouement.

Ultimately the leaden dialogue, relentlessly grim tone and endless series of psycho-thriller clichés are just too much for Hopkins’ fast-talking hamfest to overcome. Paying homage to certain films is one thing but Solace feels painfully derivative and its grungy religious imagery feels dated right from the off, leaving the whole thing feeling like a straight-to-DVD effort that managed to land a couple of big names. 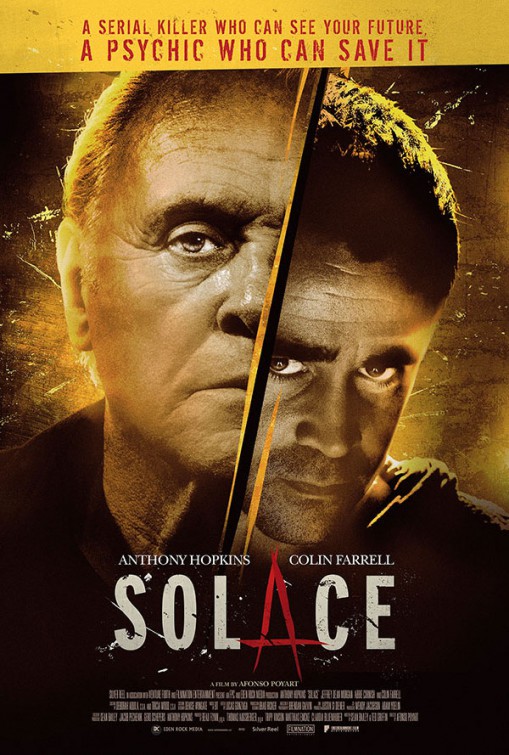