After the whopping success of Skyfall, with its billion dollar box office haul and two Oscars, the next outing for James Bond was always going to arrive in a whirlwind of hype. Skyfall director Sam Mendes chose to face up to the challenge of topping his own massive success with Spectre, a big, ambitious and spectacularly uneven film that pushes the Skyfall formula as far as it can possibly go, while attempting to tie up – and draw a line under? – Daniel Craig’s previous outings as Bond.

The film begins with a fantastic set piece as Bond makes his way through the Day of the Dead celebrations in Mexico City. In an audacious four-minute continuous take, the camera follows Bond through the hordes of costumed extras, through a hotel room, up onto a rooftop and right into the film’s first set piece. By the time the opening credits roll, we’ve had a gunfight, a helicopter crash and numerous building crumbling on top of each other.

This destruction lands Bond in some hot water with M (Ralph Fiennes), particularly as the double-0 programme is under intense scrutiny from the government with slimy MI5 agent Max Denbigh (Andrew Scott) keen to scrap the old school spies in favour of surveillance and drones. Regardless, Bond takes off on a personal mission across Europe and Northern Africa to track down Franz Oberhauser (Christoph Waltz), the head of a shady organisation named Spectre who also have a penchant for global surveillance and have been instrumental in the events of Casino Royale, Quantum of Solace and Skyfall.

The idea of protecting the people by invading their every privacy has become the central theme of many a blockbuster in recent years, from The Dark Knight to Captain America: The Winter Soldier, so it’s no surprise to see it used here. Mendes and the cavalcade of screenwriters aren’t all that concerned with it though and the eventual wrap-up of that particular subplot is so thuddingly obvious, it’s a wonder they even bothered.

The main plotline unfortunately doesn’t fare much better, as Bond’s past is dug up and the events of previous films mined for some kind of emotional impact that the film can never quite muster, like it’s telling us we should care about all of this stuff without really making us care. We’re told here that previous villains Le Chiffre, Mr White, Dominic Greene and even Silva were involved in Spectre – which is news to anyone who saw Skyfall, in particular – and that everything that’s gone wrong for Bond has been at the hands of this dastardly Oberhauser. Why? Well, you’d have to watch to find out and even then you might not be entirely sure.

The plot is further muddied by Madelaine Swan (Lea Seydoux), daughter of Mr White and latest love interest for Bond. Their relationship goes from her detesting every fibre of Bond’s being to telling him she loves him in the space of around a day which, considering we’re supposed to buy this character as a three-dimensional human being, is a little bit silly. But that is the biggest issue with Spectre: the tone varies wildly between the sombre, serious style that has been Craig’s bag so far and the old school, knockabout tone of a bygone era so certain scenes and even entire characters – Dave Bautista pops up as a near-mute henchman – feel dated and a little bit too cheesy.

The most unpleasant example of this return to the old school is Monica Belluci’s brief cameo as the grieving widow of the man Bond killed in Mexico City. After harassing her at the funeral, Bond appears at her house and beds her within minutes, before mining her for information and leaving in the morning, clad in lingerie and begging him not to go. It’s frankly embarrassing and flies in the face of all the big talk about giving us complex, strong Bond girls.

For all of its shortcomings, Spectre isn’t a bad film per se; it isn’t quite the Quantum of Solace to Skyfall’s Casino Royale. But it smacks of a film that has all the elements to be great but just doesn’t manage it. The cast in particular reads like a wishlist of Bond actors: Craig has been an excellent Bond but here seems tired of it all; Waltz is as ideal a choice for a Bond villain as you could possibly ask for, yet he is largely wasted; Belluci and Seydoux are two highly capable actors given very thin characters to work with. Even the appealing cast of characters assembled on Bond’s side, including Naomi Harris’ Moneypenny and Ben Whishaw’s wonderful Q, are side-lined for most of the film and when they do get called into action, it’s woefully brief.

Perhaps no Bond film could have lived up to the hype post-Skyfall. With Spectre, Mendes has swung for the fences and glanced it rather than knocking it out of the park. The constant references to Bond films of old don’t come off the way the film perhaps wants them to and the flimsy love story fails to connect, so while the film is entertaining for most of its indulgent 150 minute run time, there isn’t a whole lot beneath the sleek veneer to make it all that memorable. 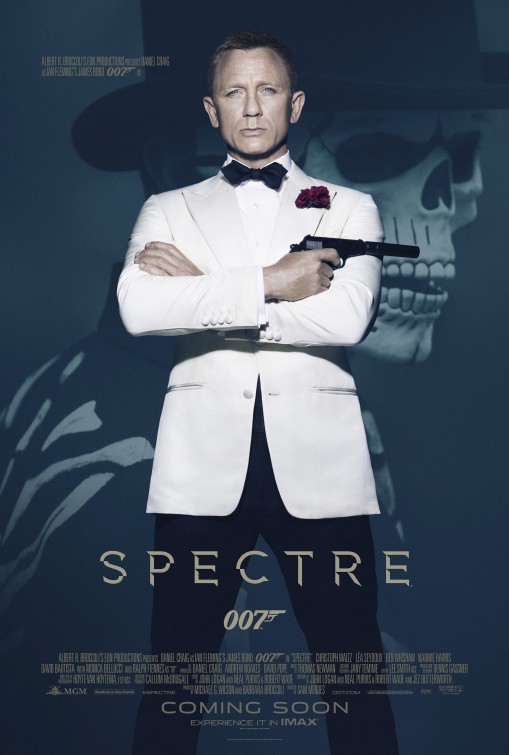