Despite the marketing for this movie trying to sell it as a generic teen party flick, Harmony Korine’s Spring Breakers is anything but. Imagine Terence Malick directing a Girls Gone Wild special and you’re closer to what this film is. This is pulpy exploitation that’s as ridiculous as it is beautiful and while it’s a more mainstream affair than you’d expect from erstwhile enfant terrible Korine, it’s far from conventional.

The plot, which is slight and often left on the sidelines, concerns four college girls who are desperate to escape to Florida for spring break. They are church girl Faith (Selena Gomez) and her three bad girl friends Cotty (Rachel Korine), Candy (Vanessa Hudgens) and Brit (Ashley Benson). Struggling for cash to make their trip happen, the girls turn to robbery, knocking over a diner with only a squirt gun, a hammer and a whole load of gumption. After that it’s plain sailing to the Sunshine state for a couple of weeks of drink, drugs, sex and endless partying. Spring break ya’ll!

But it’s not as simple as that. Things go sour when the cops break up a party and arrest the girls on drugs charges, leaving them facing jail time unless they can stump up bail money. Enter local gangster rapper/actual gangster Alien, one of the most incredible characters of recent memory, played by James Franco with corn rows, silver teeth and a knowing sense of self-parody.

At first he seems like he’s all talk but we quickly see that Alien is the real deal as he shows the girls around his tacky mansion, filled with stacks of drugs, automatic weapons and loose cash. “Look at my shit!” he exclaims over and over again as he shows off his impressive array of fashion (“I got shorts in every fucking colour!”), aftershave (“Calvin Klein Escape! Mix it up with Calvin Klein B!”) and movies (“I’ve got Scarface. On repeat! Constant ya’ll.”).

It’s an amazing performance from Franco, a guy who can so often seem bland and uninterested when given a leading man performance in the likes of Oz the Great and Powerful, but here he provides an endlessly entertaining and quotable character. He also kicks up the stakes in the final act as his feud with a rival gangster (played by rapper Gucci Mane) reaches boiling point.

But the plot is second to the style here and only seems to move along when Korine feels like it. Large parts of the film are just scenes of frat-boy bros and topless girls, gyrating against each other on the sun-scorched, beer soaked beaches of Florida’s coastline.

The whole film plays out like a series of feverish vignettes, often intercut with each other and moving back and forth in time through dreamy flashbacks and ominous foreshadowing all scored to the contrasting sounds of hushed voiceover and a pounding soundtrack, punctuated with the jarring clack of an automatic weapon reloading.

Not all of the scattershot experimentation works but when it does, it’s stunning. Take the film’s bizarrely affecting centre-piece for example, an oddly straight-faced and startlingly powerful rendition of lesser-known Britney Spears ballad ‘Everytime’, played by Alien on his white poolside piano (obviously) and intercut with a montage of a vicious crime spree. If you break it down, it’s a preposterous scene – white rapper, gun-toting bikini babes in pink balaclavas, obscure pop-ballad – that in any other movie, in the hands of any other director, would’ve been laughable but somehow Korine pulls it off with aplomb.

The plotless nature of the film might confound many viewers, particularly the teens who turn up to see their idols dirty up their image, but Spring Breakers is mesmerising filmmaking. 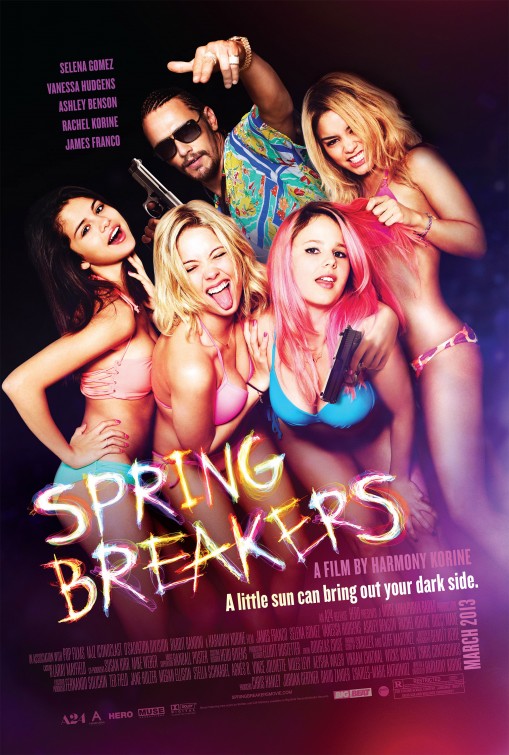