In St Vincent, the debut feature from writer/director Theodore Melfi, Bill Murray gives his juiciest performance in years in a film that’s very much built around his cantankerous charms. His deft touch with both comedy and drama carry a film that struggles to mix the two in a sickly-sweet and often clichéd tale of modern saints.

Murray stars as Vince, a misanthropic Vietnam vet who spends his days drinking too much at the local dive bar, gambling too much at the race track and availing himself of the services of pregnant Russian stripper/hooker Daka (Naomi Watts).

When newly-single mother Maggie (Melissa McCarthy) moves in next door, Vince stumbles into the role of babysitter for her young son Oliver (Jaeden Lieberher) and the two strike up an unconventional pupil/teacher relationship that takes them through a few well-worn movie tropes, including the obligatory fight training sequence where Vince teaches Oliver how to take care of the school bully.

Meanwhile, at school Oliver is learning about saints and has been tasked by his teacher (Chris O’Dowd) with writing a report on someone he knows who could be considered a saint. It couldn’t possibly be grouchy, dishevelled Vince could it? It isn’t hard to see where this one is going.

Though the character at first seems to be a straightforward sour-puss, the script gradually shows a different side to Vince through his relationship with Oliver and a few tender scenes where he visits his ailing wife in a nursing home. As skilfully as Murray plays these scenes, which in isolation are very poignant, the shift in tone between raucous comedy and touching drama are often too sudden and jarring.

It often feels like Melfi wanted to go for a Bad Santa-esque dark comedy as well as a more sentimental story and the two don’t necessarily mesh well together, leaving the film feeling muddled. It’s the more comedic material that generally works better than the more mawkish, manipulative story that seems to be determined to drag some tears from the audience one way or another.

However, the film largely works thanks to its cast. Murray is clearly having a blast in a role that plays to his strengths of sardonic comedy and dialled down drama and he shares an easy chemistry with newcomer Jaeden Lieberher, who gives a natural and appealing performance in his own right. There’s also a welcome reminder of Melissa McCarthy’s dramatic skills that are so often hidden in boorish comedy roles.

On the flipside, Naomi Watts manages the odd moment of genuine emotion but her performance is hamstrung by a Russian accent so utterly ridiculous, it makes John Malkovich’s performance in Rounders seem entirely authentic. Meanwhile, Terrence Howard pops up in a small role as a loan shark with a subplot that is never really resolved.

Though it relies a little heavily on clichés and its leanings towards the overly sentimental often grate, St Vincent is a well-meaning and often entertaining film that’s worth watching for Murray’s immensely enjoyable performance alone. Stick around for the end credits to see Murray potter around in the garden mumbling along to Bob Dylan’s Shelter from the Storm. 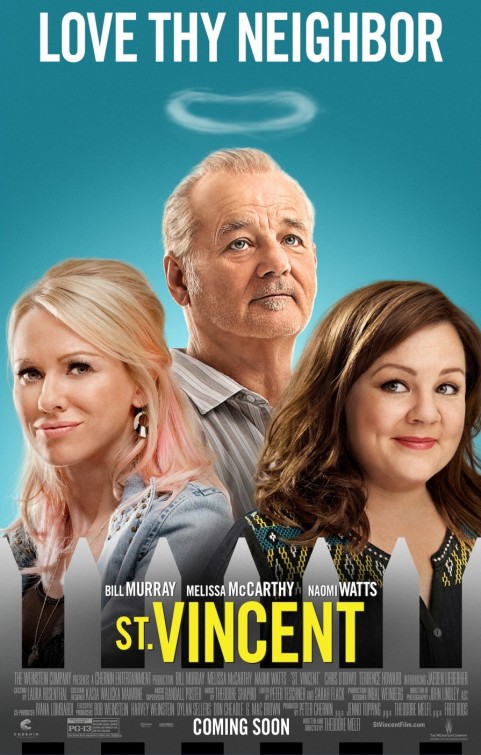