“This is not going to go the way you think”, says Luke Skywalker in Star Wars: The Last Jedi, the follow up to JJ Abrams’ franchise-resurrecting The Force Awakens.. He’s not wrong: if you thought that film was a little too safe and derivative, then The Last Jedi is the film for you. With Brick and Looper director Rian Johnson behind it, Episode VIII takes the familiar arcs that The Force Awakens set up and twists them into something more challenging and unpredictable; the crowd-pleasing thrills are still here but Johnson has made a film that’s unconcerned with what people expect of a Star Wars film and isn’t afraid to push it in another direction.

The primary focus of the film is on Rey (Daisey Ridley), the young orphan who discovered she has incredible power in The Force Awakens. She has travelled to the remote island of Ahch-To to find legendary Jedi Master Luke Skywalker (Mark Hamill) and convince him to train her in the ways of the Force. Luke is initially reluctant to train her and is sceptical about the need to pass on the Jedi religion to another generation. A central theme of the film is a desire to break away from the past and forge a new path, and Luke’s belief that the way of the Jedi should die with him plays directly into that. Rey’s incredible power also reminds the elder Jedi of Kylo Ren (Adam Driver), the Vader-worshipping Jedi-gone-wrong who was his protégé until turning to the dark side.

After their tussle in the last film, Kylo Ren and Rey appear to have developed some kind of telepathic bond, appearing to each other from across the universe, each trying to tempt the other to switch sides. Ridley and Driver’s scenes together crackle with an unusual energy as these two adversaries feel each other out while trying to figure out their own place in all of this. Driver in particular is outstanding, the bratty angst of his last appearance having developed into full on torment and anguish. He remains the most compelling of the new characters, written and performed with real complexity; he is selfish, vain, jealous, spoiled and yet somehow empathetic, up to a point at least. Hamill, too, adds more shades to his character: this is Luke as a grizzled mentor and someone haunted by past mistakes, one in particular that lends the film a fascinating moral ambiguity.

However, the strength of these sequences just highlights the weaknesses of the film’s other plot strands, which aren’t anywhere near as cohesive or as compelling. Cocky, impulsive rebel pilot Poe Dameron (Oscar Isaac) is helping General Leia (Carrie Fisher) and the Resistance in their struggle against the First Order, led by Supreme Leader Snoke (Andy Serkis) and his two lackeys, Kylo Ren and the brilliantly snide corporate brown-noser General Hux (Domhnall Gleeson). The events aboard the Resistance ship often feel overly convoluted though the performances from Isaac and Fisher are strong enough to keep these scenes interesting amidst some odd plot choices. The most disappointing aspect of the film is Finn (John Boyega), who is left stranded in a mission that leads the film to a Monaco-esque casino planet that feels ripped straight out of the prequels. His motivations from the beginning feel muddled and his arc never comes to a satisfying conclusion.

But for all of its weaknesses – a bloated run time, some uneven pacing, a number of iffy jokes, a coda that’s just too cheesy –  when The Last Jedi is good, it is really good. The film is littered with indelible imagery, from a mass battle on a white-and-red mineral planet, to a moment of complete silence as an entire spacecraft is split in half, to a beautifully surreal Jedi hall of mirrors. Through all of this, Johnson subverts expectations and delivers a film that refuses to give easy answers, avoiding the payoffs that many will have been expecting and maybe even JJ Abrams was heading towards. It isn’t perfect and it is sure to be divisive, but The Last Jedi is a startling reminder that such grand scale filmmaking can still be as difficult and challenging as it is thrilling. 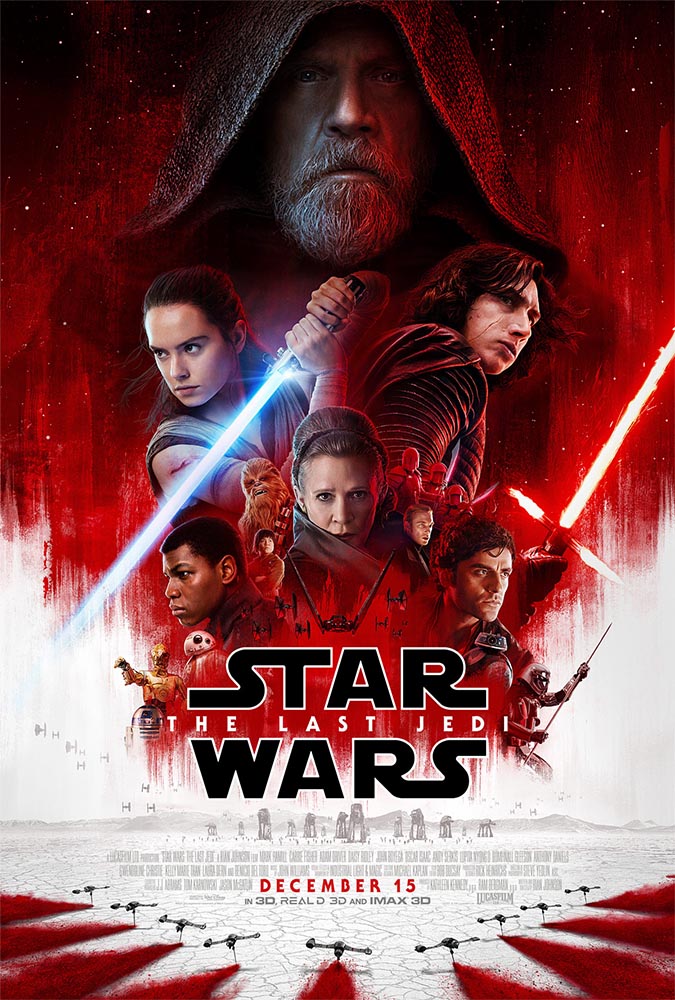