The weight of expectation has perhaps never been greater than it has been for the return of the Star Wars series, beginning when Disney purchased Lucasfilm in 2012 and reaching fever pitch in recent months. Now, after three years of speculation, nit-picking and fan-theorising, Star Wars: The Force Awakens has finally arrived and the appropriate reaction, amidst all the hysteria, is probably a massive sigh of relief. This isn’t another misfire on the scale of The Phantom Menace; this is good. This is very good.

Given that the plot has largely been concealed and fans are keen to avoid spoilers, this review will mostly steer clear of any plot specifics beyond the basic set up and definitely won’t give away any of the film’s big moments. That said, if you’re particularly spoiler sensitive, maybe check back after seeing the film.

After seeing the film, it becomes immediately clear why Disney gave the reins to director JJ Abrams. In his previous film work, from Mission: Impossible 3 to his reboot of the Star Trek series, Abrams has taken existing properties and given them a shiny new coat of paint, avoiding any major innovation but delivering an enjoyable film that sets the series on the right course. This approach slightly soured with Star Trek Into Darkness, a disappointingly lazy follow up that ended up more remake than anything else, failing to capitalise on the good work done in Star Trek.

There’s an element of that remake approach to Star Wars: The Force Awakens. Abrams has essentially lifted the fundamentals of the original Star Wars, replacing and repositioning characters into familiar roles and setting them on character arcs we’ve seen before. The good vs. evil and ‘chosen one’ themes are all present and correct and even the universe building is very similar, particularly in the central conflict between The First Order, a more Nazi-ish version of the Empire, and the resistance, a modern incarnation of the rebellion.

That familiarity is obvious and slightly disappointing but it’s also understandable. The massive challenge facing Abrams was delivering a film that kept the huge and passionate fan base – of which he himself is a part of – happy while setting up a new series of films. He has played safe for sure but he has also largely delivered on that objective, providing older fans with plenty of call backs to classic lines and big moments for the series’ most beloved characters. He has captured the spirit of the original series but also established four engaging new characters who are poised to lead the series for years to come.

These characters are Rey (Daisy Ridley), a scavenger trading scrap metal for food packets; Finn (John Boyega), a former Stormtrooper looking to escape his employer; Poe Dameron (Oscar Isaac), the resistances best pilot; and Kylo Ren (Adam Driver), an evil Jedi working with the First Order but with his own agenda. These characters converge on Rey’s home planet of Jakku, where she comes into possession of Poe’s loyal (and adorable) droid BB-8, which contains a very important file that could be crucial to either side in this war.

Each character is fantastic in their own way, with Poe taking the role of the cool, experienced hero, while Finn is more reluctant and bumbling, making them a good on screen pairing. The standout hero however is the tough, resourceful Rey, played by newcomer Ridley as a defiant and courageous tomboy. She clashes nicely with Finn, who keeps trying to treat her like a damsel in distress only to be completely outdone by her strength and skill. Sharing the screen with the newcomers for much of the film is the returning Han Solo (Harrison Ford) and it’s wonderful to see how well Ford meshes with the younger actors and the amount of effort and charisma he brings to his performance, something you can’t always say about Ford these days.

On the Dark Side of it all is Kylo Ren, who at first appears to be an intimidating Darth Vader stand in, complete with red lightsabre, menacing mask and an all-black wardrobe. But there’s an unexpected depth to the character, aided by Driver’s excellent performance, that makes him a far more compelling, three-dimensional character than he first appears. There’s an inner conflict that stems from a few of the Star Wars series’ most well-worn themes but in some ways flips them on their head and uses them in a fresh way.

It maybe isn’t a perfect film, resting on a few too many familiar elements and plot contrivances, but Star Wars: The Force Awakens feels a world away from the static, CGI-laden prequels, with Abrams’ direction bringing an energy and dynamism to a simple story that’s impressively light on exposition. It’s probably as good a Star Wars movie as we could’ve gotten at this point: a massively entertaining blockbuster that meshes the old with the new, setting the scene for some potentially more original sequels. As soon as it’s over, you want to see what happens next in this saga, with these new characters who are already on their way to becoming iconic. In that sense, Abrams and co have definitely met expectations. 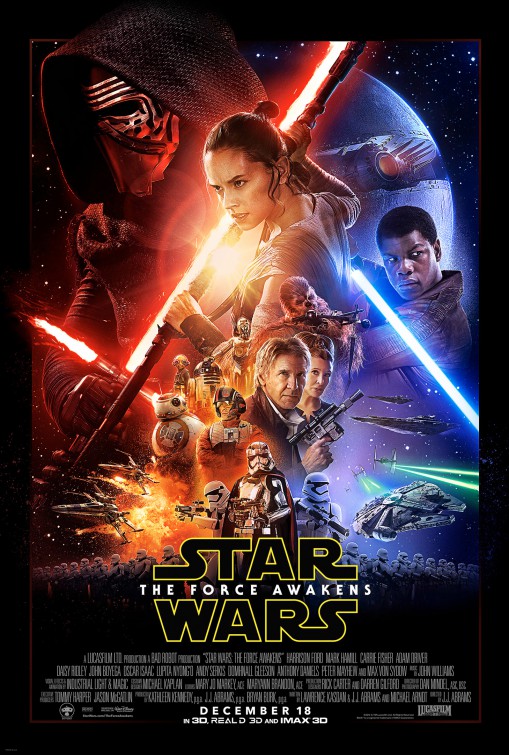