Sam Peckinpah’s 1971 Straw Dogs was one of the most controversial films of it’s period, censors ordering numerous cuts for the US release and UK censors flat out banning the film, lumping it into the ‘video nasty’ category. Featuring extreme, brutal violence and a haunting no-means-yes rape scene, it’s an unsettling, thought provoking film that vaguely comments on the Vietnam war and general social unrest.

Remaking the film for today’s audiences is no mean feat then, but director Rod Lurie’s film is a capable effort. Relocating the action from a sleepy English village to small town Mississippi, James Marsden fills the Dustin Hoffman role as David Sumner, a liberal Hollywood screenwriter who thinks moving back to wife Amy (Kate Bosworth)’s hometown of Blackwater will help inspire his writing. David’s penchant for classical music and light beer immediately marks him as an outsider amongst the locals, led by Amy’s high school boyfriend Charlie (Alexander Skarsgard), the giant, blond ex-high school quarterback.

Attempting to endear himself to the local guys, David hires Charlie and his crew to fix the barn at his new house which was destroyed by a recent storm. As Charlie’s gang begin work on the barn ridiculously early, openly walk in and out of the house as they please, knock off early to go hunting and eyeball his wife, meek little David struggles to adapt to his new environment, allowing Charlie and his boys to walk all over him. When the couple’s cat ends up found murdered in their closet, Amy begins to question David’s masculinity as he tip toes around the alpha male Charlie.

The sexual politics are rife here and there are hints throughout that Amy is perhaps unfulfilled in her marriage as she deliberately teases Charlie with her body, jogging braless and stripping at the window. This eventually leads to the notorious rape scene, so controversial in Peckinpah’s original for the uncomfortable eroticism of the scene and the ambiguous nature of Amy’s reaction to the assault. That ambiguity is all but stripped out of the scene here and though it’s still an unpleasant scene, it doesn’t have half the haunting power of the original.

Therein lies the problem with this remake. Though a well made and interesting film in its own right, which would no doubt be held in higher esteem had the 1971 version never happened, it just doesn’t have the impact of Peckinpah’s original. That is of course a symptom of it all having been done before so the fault doesn’t lie with Lurie’s filmmaking, it’s more just the feeling that it’s all a bit unnecessary.

Other than obvious changes such as the location, the story is faithful to the original movie with only small tweaks along the way. One notable improvement is the character of Charlie. Capably played by Skarsgard, Charlie is fleshed out more than his 70’s counterpart, his patronising friendliness disintegrating into menace as the movie continues, making his threat to the happy couple more interesting. Another welcome addition for some is former high school football coach Tom, played with scenery-chewing relish by James Woods.

The inevitable comparisons to the original don’t treat James Marsden as well as it does others. Marsden is a decent actor, particularly in mad cap comedy roles, but he is no Dustin Hoffman. Few current actors can match the performances of Hoffman in the 60’s and 70’s and his Straw Dogs performance is one of his best from that time so it’s no surprise that Marsden has an uphill task matching his predecessor.

This isn’t a bad film by a long shot but the shadow of Peckinpah’s classic looms large over proceedings, giving it a been-there-done-that feel which of course detracts from the shock and impact of some of the film’s classic scenes, particularly the bloody climax. It also doesn’t help the film that the majority of these pivotal moments are shown in the trailer, a bewildering decision from the marketing department. 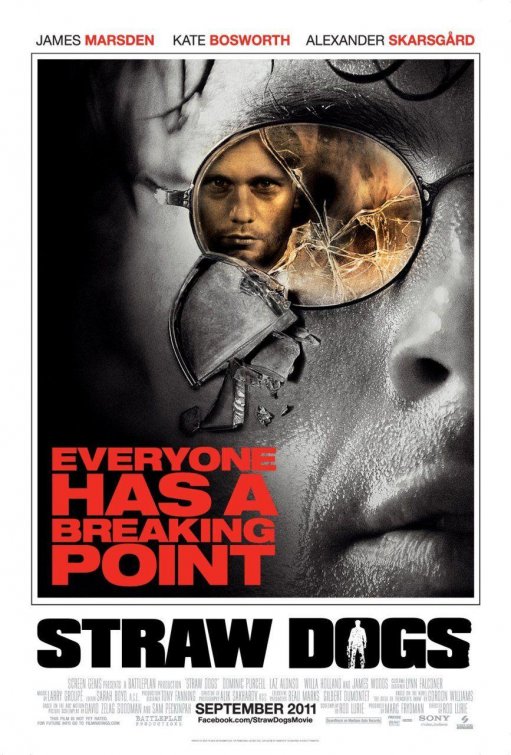