The jukebox musical has been growing and growing in popularity, to the point that almost every band or genre will soon have a stage show and/or film based around their back catalogue. Sunshine on Leith, as the title may suggest, gives Scottish pub rockers The Proclaimers the Mamma Mia! treatment, delivering an unapologetically soppy and irrepressibly joyous take on the Edinburgh duo’s biggest hits.

On paper, it seems an unlikely choice for Dexter Fletcher, the veteran actor who made his directing bow with 2011’s Wild Bill, a gritty, violent drama set in a grim London housing estate. But what marked that film apart from the humdrum of British gangster flicks was the warm heart beating right beneath its surface. Sunshine on Leith has that same heart, ten times over, as it parades its soap opera plot and stirring tunes through an extremely well-lensed Edinburgh.

The film follows Davy (George MacKay) and Ally (Kevin Guthrie) two squaddies who return home to the capital after a tour of Afghanistan that almost resulted in their death. Ally is glad to make it home to long-term girlfriend Liz (Freya Mavor), who happens to be Davy’s sister. She’s keen to hook Davy up with her friend Yvonne (Antonia Thomas), meanwhile their parents Rab (Peter Mullan) and Jean (Jane Horrocks) are approaching their 25th Wedding Anniversary.

So far, so good. But before long the film makes its way from happiness to misery, as the emergence of something from Rab’s past threatens his marriage while Liz has her doubts about settling down with Ally and has her sights set on a job abroad.

As with most musicals, Sunshine on Leith takes a bit of getting used to. The first couple of songs – ‘Sky Takes the Soul’ and ‘Misery to Happiness’ – seem a little jarring and it takes some time to get a handle on the cheery and often cheesy tone and those accustomed to The Proclaimers very particular singing style will find it strange hearing the glossy, Glee-style covers of their hits.

Even once you find your footing, the film still has a myriad of problems. Being based on songs, it’s always going to be clear what plot points the film is going to touch on, and while there’s some fun in trying to predict how they’ll fit in the big hits, the plot suffers in trying to bend itself to fit the songs. The plot is painted in broad strokes and the characters rely on the songs to flesh them out. As well as these fundamental issues, there are little things like some clunky segues into song and some of the Edinburgh accents will baffle anyone familiar with the city.

Despite the glaring array of flaws, the shear energy and joy on display is just irresistible. It must be impossible to hate a film that’s as gleeful, spirited and heart-on-its-sleeve emotional as this one. If the none-too-subtle plot isn’t tugging the heart-strings enough, just wait until Peter Mullan unleashes his gravelly, Tom Waits voice for a rousing rendition of ‘Oh Jean’ or Jane Horrocks performs ‘Sunshine on Leith’ at a particularly delicate moment.

It’s the two veteran actors who provide the best performances in the film. Mullan eschews his hard-man image to show his softer side as a caring father and devoted husband. Horrocks has possibly the shakiest accent in the film – though lead George MacKay struggles too – but it’s not enough to spoil her heartfelt performance.

For all of its flaws, Sunshine on Leith is a wonderfully enjoyable experience, putting the working class poetry of The Proclaimers music to good use. The cast are perky and the scenery beautiful, particularly as Fletcher makes sure to set every big scene right in front of one of Edinburgh’s many cinematic landmarks. 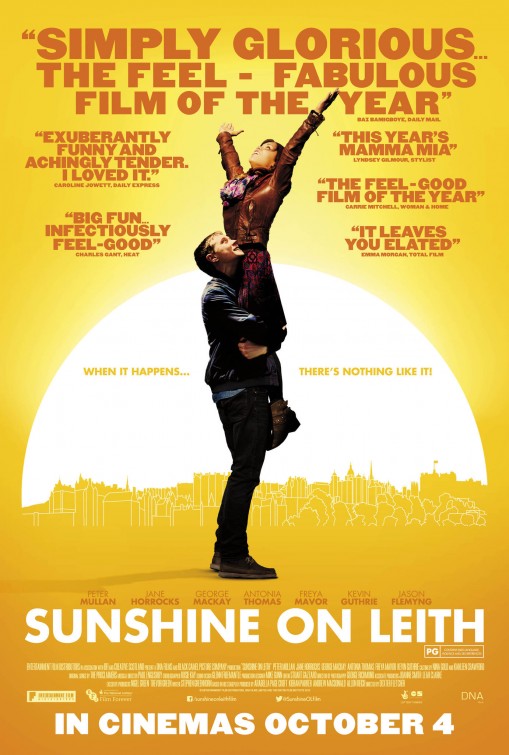