Swiss Army Man sets out its stall early on, opening on a suicidal man, trapped on a desert island, attempting to hang himself. When his noose breaks, he notices something in the surf: a pale, lifeless body with a serious case of post-obit flatulence. So powerful are his pumps that they can propel him through the ocean and, before the opening credits appear, our stranded protagonist has mounted this farting corpse and is riding it triumphantly to safety.

As openings go, it’s a ballsy move and is likely to alienate as many viewers as it enthrals. But if you can get on board with the body humour – most of it fart-based, some of it worse – then Swiss Army Man is a unique and richly rewarding experience. What other film explores love, hope, loneliness and our need for human companionship – as well as just about anything else you want to read into it – through a dead body and a series of off-kilter dick jokes?

Paul Dano stars as Hank, our stranded protagonist. Nothing revealed of how he came to be stranded in the first place or really anything about his life, at least at first. We only really start to learn about him when he starts talking to the corpse, which he names Manny and is played with an unflinching grimace and impeccable physical comedy chops by Daniel Radcliffe. As well as his farting powers, Manny comes in useful in a number of different ways: his rigid body can act as a spring-loaded catapult or create a spark big enough to start a fire; his belly seems to hold a near-endless amount of drinking water that spews from his mouth like a demented Coke machine; and his erection acts as a compass, guiding Hank through the woods.

Despite all of his abilities, the main thing Manny provides is company; he gives Hank someone to talk and eventually, he starts talking back. Manny has no memories of his previous life and doesn’t seem to know what anything is, allowing Hank to spend hours explaining everything to him. Whether intentional or not, it somehow fits perfectly that Hank – a sad, self-involved millennial – would relish the opportunity to have someone to teach about everything and spill all of his opinions to, even on subjects he plainly knows very little about.

It’s one of many subversions of the typical Sad White Guy indie formula that the film could have – and in some ways, still does – adhere to. First time writer-directors Dan Kwan and Daniel Scheinert – collectively known as Daniels – don’t have as much sympathy for their leading man as many others in this genre and aren’t afraid to his rougher edges. The more we learn about Hank, the creepier he seems, particularly once he starts using Manny to help act out a fantasy meet cute with Sarah (Mary Elizabeth Winstead), the girl who’s face adorns his phone’s lock screen. The twee inventiveness and hand-crafted feel of these scenes recall Michel Gondry, as Hank crafts elaborate sets from whatever he can find – sticks, leaves, trash – to recreate encounters with Sarah. However, it quickly becomes clear that their relationship isn’t what Hank would have you believe and these revelations add another note of ambiguity to a film littered with them.

Though it grabs the attention with a farting Daniel Radcliffe, Swiss Army Man ultimately holds it with a story that’s rich and compelling, and open to any number of different interpretations. It’s no doubt a divisive film, with the puerile humour and the extreme levels of quirk – the soundtrack is a series of acapella songs sung by Radcliffe and Dano – but if you can get on the film’s wavelength, it’s a massively rewarding experience. 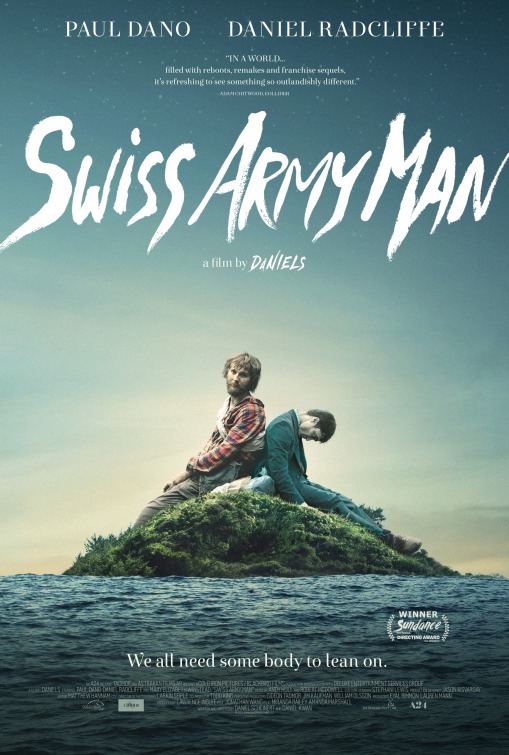