Back in 1996, Trainspotting opened with Ewan McGregor’s Renton running from security guards down Edinburgh’s Princes Street to the opening strains of Iggy Pop’s Lust for Life. It’s an iconic moment in a film that helped define an era, one of the quintessential films of the 90s.

Twenty-one years later, Danny Boyle’s belated sequel T2 Trainspotting once again opens on Renton running but this time it’s on a treadmill in an Amsterdam gym, the drug-addled youthful exuberance replaced by sober, middle-aged ennui. T2’s opening, like the film that follows, leans on the memory of its predecessor without using it for cheap sentimentality. Instead it examines and reflects on that nostalgia, making it a central theme of the film.

The film picks up with the characters twenty years after Renton made off with the take from a drug deal, leaving his pals in the lurch. When his life in Amsterdam hits the rocks, he returns to Edinburgh, looking to reconnect. His old friends have followed sadly fitting paths: Sick Boy (Jonny Lee Miller) is running a blackmail scam with his Bulgarian escort girlfriend Veronika (Anjela Nedyalkova); Spud (Ewen Bremner) has found himself back on heroin after losing everything to a darkly comic misunderstanding; Begbie (Robert Carlyle) meanwhile has just pulled off a gruesome prison escape after a 20-year stretch. The cast are all on form, particularly Carlyle who finds new shades of vulnerability and insecurity in a character that could easily slip into self-parody.

All of these characters are older but not necessarily wiser, just bitter and disappointed at the way their lives have panned out: a failed marriage, cocaine addiction, no prospects, heroin, prison. They are all hung up on the past in some way, whether it be Begbie’s desire for revenge or the rose-tinted nostalgia that Sick Boy and Renton immerse themselves in. Boyle cuts the present day action with flashes from the past, mostly very brief clips from the first film but occasionally grainy home video shots of the characters as kids. Of course every nod and reference has a remember-that-time thrill but the film uses the weight of the original in a smart and genuinely poignant way, with the characters struggling to move beyond the ghosts of their past while lurching towards the same old mistakes, history doomed to repeat itself.

Aided by Anthony Dod Mantle’s stunning cinematography and Jon Harris’ rapid-fire editing, Boyle brings the same verve and visual flourishes that helped the original stand out so much. The film again shifts between grim social realism and wild flights of fancy, and also hops in location from derelict high-rises to Edinburgh’s more scenic areas. There’s a wonderful scene that finds Renton and Spud at the top of Arhur’s Seat, looking over the city that’s a welcome moment of peace and beauty amidst the chaos, brutal violence and scabrous humour that permeates the rest of the film.

Where the film falls down is on a plot level, with most of the main plotlines taking a backseat to just spending time with the characters. This leads to some of the film’s most enjoyable moments but means whenever it does check in on the plot, it feels like a drag. The action mostly centres on Sick Boy and Veronika’s plan to open a sauna, with Spud and Begbie’s subplots tying into it eventually but many details feel contrived and implausible, building to an ending that ties things up a little too neat. Also striking a false note is the inevitable revisit of the famous ‘Choose life…’ speech, which is awkwardly crowbarred in mid-conversation, though the material has been updated for our current social climate. Gone are the days of compact disc players and electric tin openers; Renton’s vitriol is now aimed at social media, zero-hour contracts and reality TV.

The most impressive thing about T2 Trainspotting is just how bold a decision it is to explore and dissect the nostalgia surrounding the original instead of lazily playing up to it. It would have been easy to deliver a crowd-pleasing romp through all the moments that have now become iconic, but Boyle goes for something more melancholy. It draws much of its power from the original but manages to provide new insights into familiar characters and move them on in an ultimately satisfying way. 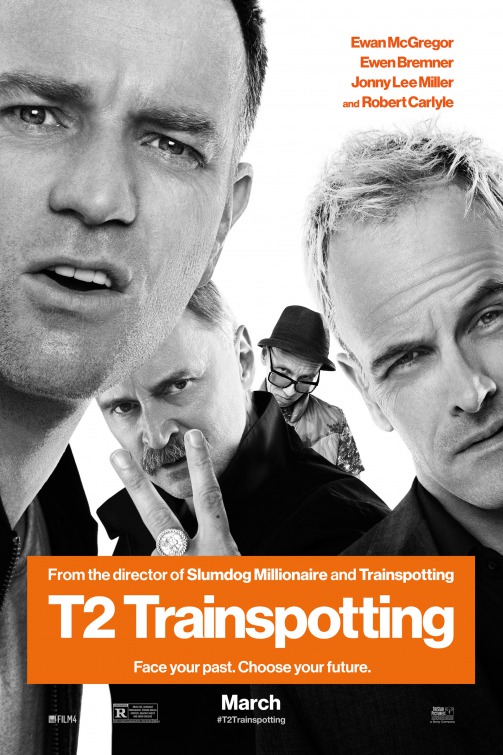