With a long list of memorable supporting roles behind him, including an Oscar nominated turn in Revolutionary Road and a knockout performance in TV’s Boardwalk Empire, Michael Shannon has established himself as one of America’s most prolific and talented actors. With Take Shelter, Shannon’s reputation will only grow as he gives the most powerful and mesmerising performance of his career in a film that is breathtaking on every level, from the performances, the haunting mood, bleak imagery and terrific craftsmanship of writer/director Jeff Nichols (Shotgun Stories, also starring Shannon).

In a role presumably written for him, Shannon plays Curtis LaForche, a construction worker in small town Ohio. He has a good job and a setlled home with his loving wife Samantha (Jessica Chastain, again) and their hearing impaired daughter Hannah (Tova Stewart). He works alongside his best friend Dewart, who early in the film tells Curtis, “You’ve got a good life. I think that’s the best compliment you can give a man: take a look at his life and say, ‘That’s good.’ ”

But as we see in the film’s first scene, an arresting shot of Curtis outside his home as a massive storm is brewing and he is soaked in motor oil rain, Curtis has began to have unusually vivid nightmares. These sinister visions, including vast thundering storms, flocks of birds, levitating furniture and always some form of violence, are stunningly realised by the effects team, giving us an insight into the horror that Curtis is experiencing. When Curtis visits his mother in a nursing home, we discover that she is a paranoid schizophrenic and Curtis and his brother had to be taken from her at a young age.

As the dreams and hallucinations continue to plague Curtis, he hides this inner turmoil from his family and friends but it becomes increasingly apparent to them that something is troubling him. His behaviour becomes erratic as he builds a pen for the friendly family dog after it bites him in one of his nightmares and he begins to obsess over the old storm shelter out back, taking out an ill-advised loan and illegally borrowing tools from work to renovate it. All of this alienates him from the community and Samantha grows more and more distressed by his behaviour.

Chastain is brilliant as Samantha, a woman who desperately wants to understand her husband and what he’s going through and eventually offering compassion and support as his problems reach a climax. Her work here brings another dimension to the movie, that of a study of a marriage and all the give and take that involves. Her subtle, rational turn is the latest in a long line of impressive performances this year and another reminder why she’s been in such demand. At this point, she could virtually fill out the Best Supporting Actress category on her own.

Take Shelter is a breathtaking portrait of mental illness, marriage, the fear of financial ruin that exists in so many homes across the Western world that also comments heavily on the situation with American healthcare as Curtis struggles to find adequate psychological help and his daughter’s hearing implant depends on his health insurance. These are the kinds of pressures that many people face at the moment and Take Shelter taps into that fear through Curtis’ breakdown and Shannon’s powerhouse performance is what truly brings the film to life. Though a late shouty outburst in front of the entire town will be the scene many remember and will most likely be Shannon’s ‘Oscar clip’, it’s the subtle, quiet moments that surround this that make up the real power of his exceptional performance. The film ends on an ambiguous note that presumably isn’t meant to be taken literally but however you interpret it, Take Shelter is one of the year’s finest films. 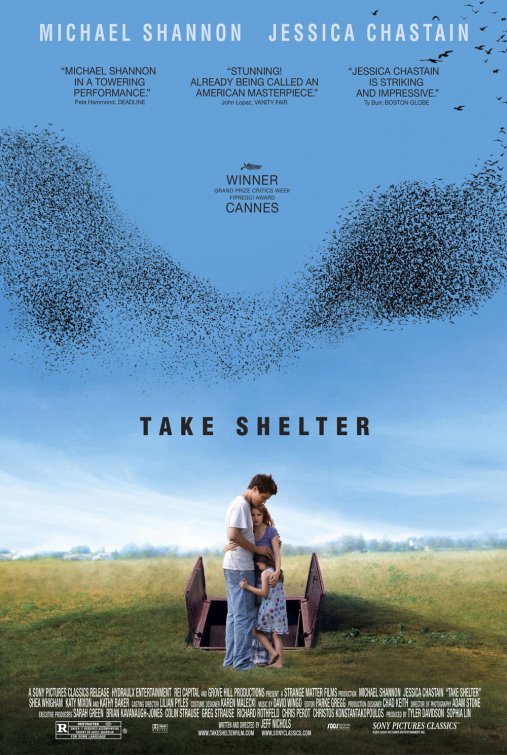