Four years ago, buoyed by an ass kicking Liam Neeson and an iconic phone call, Taken became a surprise hit, recouping almost ten times its budget and turning Neeson into a late-in-life action star. With the film’s popularity growing over the years on home video, it’s no surprise producer Luc Besson was eager to capitalise on the film’s success with a sequel, the unimaginatively titled Taken 2.

If you think the title suggests a cynical, lazy cash-in then your expectations are set at the right level for what is essentially a lifeless rehash of the original movie with all the edges smoothed out to make it to a family-friendly rating.

The film opens with some Albanian gangsters burying the bodies of fathers, brothers and sons that Neeson’s ex-CIA operative Brian Mills disposed of while rescuing his daughter in the first movie, vowing revenge on the man who murdered them.

Meanwhile, in a timeline that doesn’t seem to add up whatsoever, the Mills family are trying to move on from the bloodshed and in some excruciatingly painful expository scenes we learn that ex-wife Lenore (Famke Janssen) has split up with her latest husband and the son-of-a-bitch has pulled out of a family holiday, leaving Lenore and daughter Kim (Maggie Grace) at a loose end for the summer. Brian comes to the rescue and invites the ladies to join him in Istanbul, where he’s working for a few days. Uh oh.

Things are going great in Istanbul, with Kim trying to rekindle the romance between her parents. That is until the dastardly Albanians get involved, capturing Brian and Lenore while Kim hangs out by the hotel pool. Inexplicably – a word that will feature often in any discussion of this film – the goons have Brian and Lenore at gunpoint, yet still let him call Kim and give her the low down on what’s going on. The phone call is supposed to echo the showcase scene in the last film but doesn’t even come close which is a pretty good summary of the movie.

While the first film was undeniably ludicrous, this instalment just races from one preposterous scenario to another, most of which are either hilarious, cringe worthy of both. At one point, shackled in a dungeon, Brian manages to call Kim on a miniature phone and give her instructions on how to find him. This ridiculous method involves maps, shoelaces, steam signals and, of course, letting off hand grenades in the middle of Istanbul.

As he proved with last year’s abysmal Colombiana, director Olivier Megaton’s certain set of skills doesn’t include directing action scenes. While 60-year-old Liam Neesons lurches through the kind of fight scenes that made the first movie such a guilty pleasure, Megaton decides to just throw the camera around in the worst impression of a Bourne movie you’re ever likely to see. It’s impossible to tell what’s going on which, given how slowly Neeson is moving, is probably for the best.

With Neeson on autopilot – and with a script like this, who can blame him? – Taken 2 is almost a complete write-off. There’s slight entertainment value in just how stupid the film is which stops it from becoming boring which is just about the only positive to be said of the film. Taken 2 tries hard to capture the fun and chaos of the first film but misses virtually everything that made it enjoyable with a script that really has no clue what to do with these characters.

Unfortunately, the ending leaves it glaringly open for a third movie which would struggle to be any worse than this one. 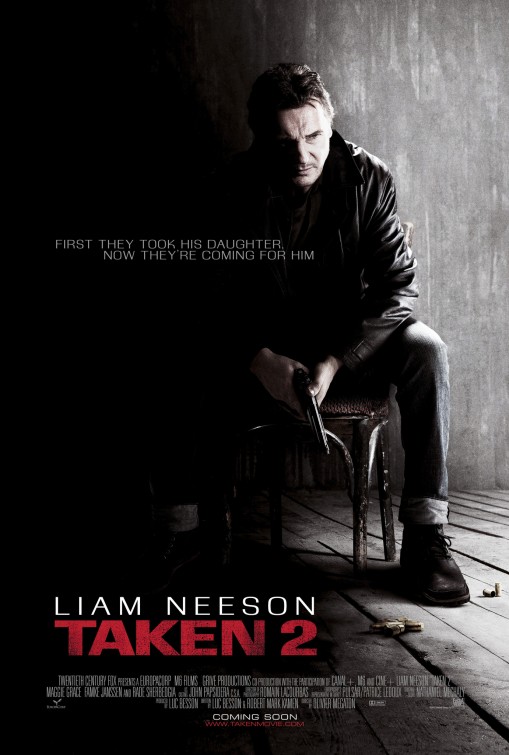