“It ends here”, reads the poster for Taken 3 and after this insipid threequel, we can only hope they stay true to their word. The film’s star Liam Neeson certainly didn’t, claiming after the disappointing Taken 2 that he wouldn’t be back for a third. Clearly a hefty paycheck or contractual obligation persuaded Neeson to return to the franchise that kick-started his much lauded but actually quite lacklustre career as an old-age action star.

The first Taken film, which was a surprise hit in 2008, was a gloriously violent and ludicrously silly action romp through Europe, with Neeson’s super-agent eliminating numerous Eastern Euro baddies on the way to finding his kidnapped daughter. It’s no surprise then that it launched a franchise and various other action vehicles for Neeson but after painful efforts like Unknown, Taken 2 and Non Stop, the novelty of seeing the one time Oscar Schindler kick ass has well and truly worn off. Only Joe Carnahan’s survival pic The Grey and last year’s grubby detective thriller A Walk Among the Tombstones have successfully capitalised on Neeson’s tough guy image.

Nonetheless, here we are with Taken 3, which finds Neeson’s retired black ops agent Bryan Mills living the quiet life again, hunting for a birthday gift for his daughter Kim (Maggie Grace). Despite being a college student who lives with her boyfriend and – unbeknownst to Mills – may or may not be pregnant, Mills still sees her as a child and opts for a giant stuffed bear that doesn’t go down particularly well. Meanwhile, ex-wife Lenore (Famke Janssen) turns to Mills when her marriage to wealthy new husband Stuart (Dougray Scott) hits a rocky patch.

It’s almost impossible to put into words just how painful these early scenes are. Neeson’s stiff, stilted performance couldn’t be any less convincing as the loving father and concerned ex-husband but it’s hard to blame the cast when the dialogue they’re given would make soap actors cringe. The hazy lighting and soppy score are pitched at a similar level, making the domestic bliss sequences look like some kind of parody.

After what feels like an eternity, the plot kicks in when Lenore’s dead body turns up in Mills’ bedroom and all the evidence points to the man himself. Rather than react like a normal person and cooperate with the police, Mills goes on the run and the plot plays out like a cut rate version of The Fugitive, with wily detective Franck Dotzler (Forest Whitaker) on his tail. There are plenty of scenes to suggest that Dotzler knows what he’s doing, constantly predicting what Mills is going to do, yet he never actually does anything about it and it never seems like he believes Mills is guilty in the first place either; the whole chase just never rings true.

As with director Olivier Megaton’s previous efforts Taken 2 and Colombiana – both also scripted by Luc Besson and Robert Mark Kamen – the plot is littered with overly convoluted set-ups and lifeless action scenes, none of which are even entertaining. There was a certain stupid entertainment factor to watching Kim help Mills via blowing up half of Istanbul with grenades in Taken 2 but all we get this time around is some poison in a yoghurt and Mills lurking in a ladies toilet. The action scenes we do get are similarly lifeless, with Megaton again employing rapid cuts and wild shaky cam to the point that it’s impossible to know what’s going on. That said, considering how stiff the 62-year-old Neeson looks on the rare occasion we actually see what he’s doing, it might be a smart move.

There isn’t even anything in the way of a compelling adversary for Mills. Whitaker – who played a similar character much better in The Shield – makes a decent stab at Dotzler but the character is written in such a clumsy, confused way that he barely makes any sense. Beyond Dotzler, all we get are generic Russian goons set up for Mills to plough through, killing time until the inevitable climax.

There’s virtually nothing to recommend Taken 3. From soap-style dialogue to dreary, phoned in performances and action machines seemingly filmed inside a washing machine, it’s about as much fun as going toe-to-toe with Bryan Mills. It’s about time Neeson retired this particular set of skills and put his acting chops to better use. It’s early days yet, but this is surely a contender for the worst of 2015. 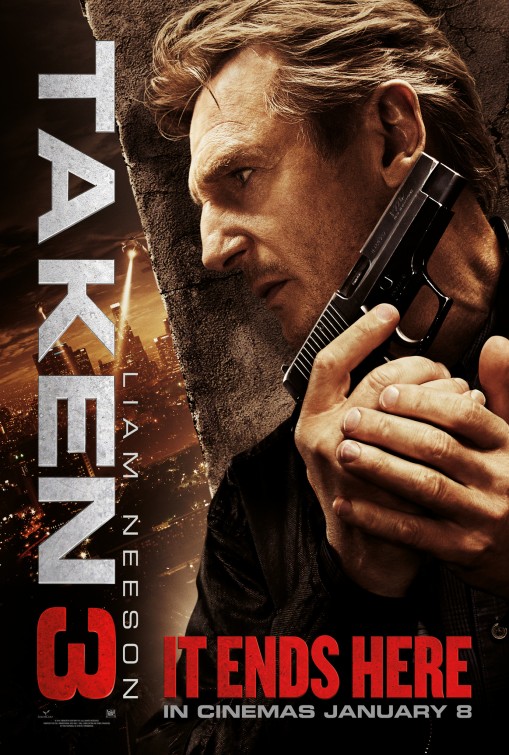