It’s baffling to think that the script for That Awkward Moment ever sat atop the list of the best unmade scripts in Hollywood. Writer/director Tom Gormican’s film is a limp try at Judd Apatow-style humour, with insufficient laughs and attempts at sentimentality that never ring true.

On paper, it’s an impressive young cast: Zac Efron has challenged himself since breaking away from his High School Musical roots; Michael B. Jordan is a star on the rise, receiving great acclaim for his performance in Fruitvale Station; and Miles Teller, a talented dramatic actor not averse to elevating low-brow comedies. As talented as these actors are, there isn’t much they can do with a script like this…

Efron plays Jason, a book-sleeve designer – a movie job if ever there was one – who spends his evenings hanging out at bars and trying to expand his ‘roster’, a group of women he keeps around for no-strings sex. If any of them ever get too close and want more from the relationship, he ditches them and moves onto the next. His buddy Mikey (Jordan) has just found out his wife has been cheating on him and is facing a divorce, so Jason and Daniel (Teller) force him to get back in the game and the three friends vow to stay single.

Of course, it isn’t that simple and it’s obvious from the get-go where the this is going. Mikey starts seeing his wife again. Daniel has a good thing going with Chelsea (Mackenzie Davis), using each other to lure in potential conquests, until they eventually start falling for each other. Even Jason meets someone, a pretty young writer named Ellie (Imogen Poots), who isn’t the type to settle for a spot on his roster.

Why she wants to see him at all is baffling though. After one of the most dreadful rom-com meet-cutes in recent memory, Jason ends up back at Ellie’s and they sleep together. The next morning, thanks to a laboured series of contrivances, Jason mistakes Ellie for a hooker and sneaks out before she wakes up. Somehow the relationship survives this bump and Ellie wants to see Jason again, even inviting him to her birthday party, where he turns up wearing a giant rubber penis. That still doesn’t deter Ellie. Nope, she only threatens to draw the line when Jason bails out of accompanying her to the funeral of a loved one, lest she get the idea that they’re “serious”. This relationship is easily the worst part of the film, which is an issue considering it’s the main focus.

Teller and Davis – who impressed in Drake Doremus’ Breathe In – make for a more appealing and interesting couple and share just about the only spark of chemistry in the film. The three leads don’t feel like friends at all and the attempts to conjure up some casual banter feel forced, particularly in a scene where Efron and Teller riff on the colour of Jordan’s recently spray-tanned penis. It’s like Gormican saw The 40-Year-Old Virgin and decided he could do that. He really can’t.

The friendship is just the centrepiece of a film that fails to find any note of truth. Everything here feels like it was designed specifically to look cool in a movie, from the characters jobs – which they seem to get endless amounts of time off from – to their perfectly messy apartments and their slick designer clothes. It all just adds to the air of artifice.

While Teller gets some decent mileage out of his mini-Vince Vaughn schtick, the rest of the cast is sorely wasted. Efron is given a borderline sociopath character and Jordan, whose character seems like the nicest of the bunch, is given little to do but call his two friends assholes and idiots. He’s right, but doesn’t he deserve better material?

A lot of this would be easier to overlook if the That Awkward Moment was funny enough and while it does garner enough laughs to keep it from being a complete right-off, there isn’t enough to paper over the cracks and unfortunately this promising comedy is mildly amusing at best, sadly misogynistic at worst. 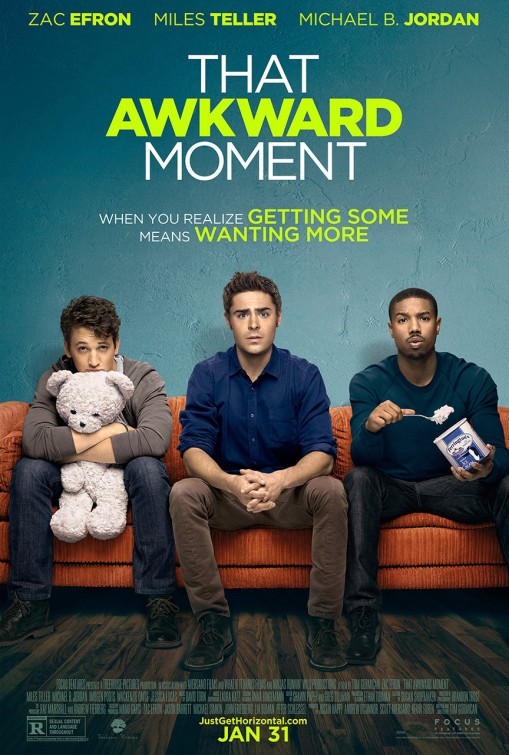