It turns out Batman isn’t the only superhero Ben Affleck has played this year. In Gavin O’Connor’s action thriller The Accountant, he plays Christian Wolff, a high-functioning autistic accountant who moonlights as a highly skilled vigilante with a very particular moral code. He even has his own Batcave in the form of a trailer hidden away in a non-descript storage container. The film is as bizarre as that premise suggests, with about three films worth of plot thrown into one problematic, confusing and wildly entertaining film.

The film opens on Christian as a child, being taken to some kind of special retreat for autistic children, run by a kindly neurologist (Jason Davis) who offers a safe space for the kids. Christian’s military father has different ideas, preferring to expose his son to more of the things that upset him – bright lights, loud noises – in an effort to toughen him up. He doesn’t stop there though, giving both Christian and his brother extensive martial arts and military-grade weapons training. The film returns to this backstory through Dexter-style flashbacks throughout the film, lending Christian’s early years the weight of a superhero origin story.

Present-day Christian runs a modest accounting firm out of a strip mall, applying his exceptional math skills to cooking the books for shady criminal organisations. The plot kicks in when he takes on a legit job at a prosthetics company called Living Robotics who, courtesy of junior exec Dana (Anna Kendrick), have discovered a $63 million discrepancy in their books. Of course, Christian finds the problem overnight by – you guessed it – writing a lot of equations on a lot of windows, which spooks the company’s CEO Lamar Black (John Lithgow) who relieves Christian of his duties.

When people start to turn up dead and an attempt is made on Dana’s life, Christian goes on a mission to uncover the real conspiracy at the heart of Living Robotics. It’s at that point the film essentially becomes incoherent, with a labyrinthine plot that’s further muddled by the flashbacks of Christian’s past, multiple subplots and extraneous characters. There’s even a subplot that has its own subplot, complete with flashbacks to flesh out the backstory. That one involves JK Simmons’ treasury agent and his young colleague (Cynthia Addai-Robinson) trying to track down Christian. The film grinds to a halt to allow Simmons to just fully explain plot and character connections for at least ten minutes, which may or may not tie into another subplot involving an incarcerated Jeffrey Tambor that can’t help but call to mind Arrested Development.

The film sets up enough characters and plot to cover an entire season of television, leaving a ton of loose ends dangling that then need to be tied up in an exposition-heavy final third. It’s all handled very clumsily – and that’s to say nothing about the film’s depiction of autism – but somehow it all adds up to something far more entertaining than it has any right to be. The action set pieces are slick and occasionally brutal as Christian takes on multiple opponents at once, mixing the usual Bourne-style, ju-jitsu inflected hand-to-hand battles with liberal helpings of coolly efficient gun play. Affleck is perfect for this kind of no nonsense, John Wick-style killing machine role, making the most of his hulking physicality and commanding screen presence. The deadpan nature of the role also suits him and here he downplays everything, with his non-reactions garnering the bulk of the film’s laughs.

It’s rare that a film cries out for a sequel but there is enough potential in The Accountant to warrant another instalment. The stage is set now, we have the characters and the world established and there’s even an intriguing familial connection that would be worth exploring further. A sequel free of the clunky backstory would be a huge improvement; as it stands, this is an admirably ambitious but wildly uneven action thriller that is hugely watchable despite its obvious deficiencies. 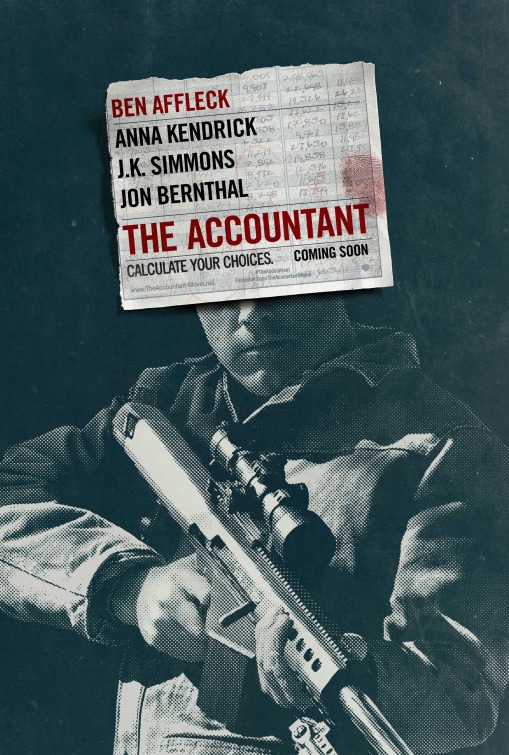