In Sam Raimi’s Spider-Man trilogy, the second instalment was by far the strongest in the series and still stands out as one of the best in the superhero genre. A mere five years after Raimi’s trilogy concluded with the lacklustre Spider-Man 3, Spidey was back on the big screen in a reboot that promised an ‘untold story’ but only delivered a strong sense of déjà vu. So with The Amazing Spider-Man 2, director Marc Webb has the unenviable task of delivering a sequel that’s bigger and better than the first, which of course means more action, more villains and more set-up for further sequels and spinoffs.

The film picks up not too long after the first film, with Peter Parker (Andrew Garfield) enjoying life as Spider-Man, who has become a major talking point in New York City. In his non-superhero life, he’s just graduated high school with girlfriend Gwen (Emma Stone) and is making a little cash on the side, selling photos of Spider-Man to The Daily Bugle.

But Peter is still wrestling with the ghosts of his past, particularly the guilt he feels for seeing Gwen despite promising her father he would stay away in order to protect her. There’s also the mystery surrounding his parents, whose death we see in flashback in the opening scene.

As if that wasn’t enough to be getting on with, the film introduces not one but two major antagonists. First up is Max Dillon (Jamie Foxx), a lonely electrical engineer who just wants to be noticed but finds himself transformed into luminous blue baddie Electro. Then there’s Harry Osborn (Dane DeHaan), Peter’s childhood friend who returns home from years abroad to assume control of Oscorp after the death of his father.

Both characters have an interesting arc but the script struggles to fit both into the film when one would have sufficed. There’s pathos to be had from Electro but he goes from misunderstood outcast to fully fledged maniacal bad guy in no time at all. Harry on the other hand, excellently portrayed by DeHaan as a listless millionaire playboy with daddy issues, has history with Peter and a good reason to want Spider-Man – he has inherited the disease that killed his father and Spidey’s blood may be the cure – but again, his villainy goes from 0-60 in the film’s muddled third act. One of these guys could have been a superhero movie nemesis that’s up there with the best of them but together, they’re largely wasted.

As well as a muddled plot, the film struggles to settle on its tone and stick to it. The cartoonish action, broad humour and slapstick suggests it’s aimed at a very young audience but then there’s a lot of talky, human drama and more mature themes mixed in and the two don’t sit well together.

That said, it’s in the talky, human drama that Webb really excels. He isn’t exactly adept at juggling a multitude of plot points and supervillains but he definitely knows how to handle relationships – as his debut (500) Days of Summer will atest to – and in Garfield and Stone, he has a winning couple to focus on. Garfield is all awkward charm while Stone is as sharp and witty as ever, and there’s a palpable chemistry between the pair that makes their scenes together the best in the film by some distance.

Elsewhere in the cast, Sally Field continues to prove herself perfectly cast as Peter’s Aunt May and there are walk-on roles for Paul Giamatti as Russian hood Aleksei Sytsevich, Felicity Jones as Felicia Hardy and BJ Novak as Alistair Smythe, all names which will mean something to comic book fans and surely suggest larger roles later in the series.

Much like the first film, the raw elements are there for a definitive on screen Spider-Man to rival Raimi’s Spider-Man 2 but ultimately, The Amazing Spider-Man 2 can’t seem to decide where to focus and the result is a bit of a mess. It is an entertaining mess though, thanks in no small part to a stellar cast, particularly the beguiling leading couple. 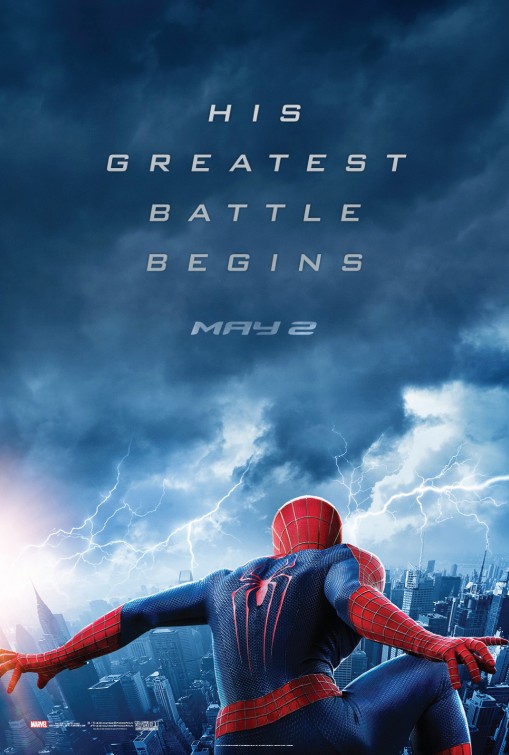