Australian writer/director Jennifer Kent announces herself as an exciting new talent with her feature film debut The Babadook. Shot on a shoestring budget, part of which came via a Kickstarter campaign, the film is a dark and unsettling psychological horror that favours mood, metaphor and character over cheap jump scares and easy payoffs.

The film focuses on Amelia (Essie Davis), a single mother traumatised by the loss of her husband, who died in a car crash on the way to the maternity ward. Six years on, her troubled young son Samuel is determined to step up and be the man of the house, protecting his mother from the monsters he sees in every shadow of their home.

Samuel’s obsession with imaginary monsters is worsened when he discovers a mysterious children’s book named The Babadook, a creepy, hand-drawn pop-up book that’s all sharp edges and monochrome drawings that recall the early silent films that seem to occupy Amelia’s television every night. The book tells the tale of a bizarre figure known as Mr Babadook, a top-hatted, sharp-fingered creature who, according to the book, announces his arrival with three sharp knocks and once you let him in, there’s no getting rid of him.

Amelia tries to get rid of the book but it keeps reappearing with added pages that tell of the grisly fate that will befall Amelia, Samuel and even their family dog, all in perfect rhyme. Before long, it’s Amelia who is feeling the presence of this sinister stranger in her home more than Samuel and she begins a slow and harrowing descent into madness that mirrors the events foretold in the book.

Though set in modern day Adelaide and featuring the odd reference to the internet and similar staples of contemporary life, the film feels like it exists in an off-kilter and timeless place where colours are muted and dark corners are everywhere. The film at times feels like a pitch-black fairytale, particularly the rare appearances by the titular monster. Resembling F.W. Murnau’s Nosferatu but with a nattier wardrobe and rendered in jerky stop-motion animation that’s reminiscent of the films of George Melies (who is directly referenced in the film), the Babadook is a memorable movie monster, complete with an iconic look and disturbingly catchy rhymes that linger in the memory long after the end credits have rolled.

But the real monster here is Amelia’s grief over her lost husband and the bitter depression and loneliness that she takes out on Samuel who, consciously or not, she resents for the death of her beloved husband. With Sam suspended from school for his bad behaviour and the anniversary of the accident looming, Amelia becomes overwhelmed by her inner demons, manifesting externally as visions of her deceased husband and the haunting figure of the Babadook.

At the centre of the film is a pair of astonishing performances from Essie Davis and young Noah Wiseman. Davis, perhaps best known for her role in The Matrix sequels, is a revelation, wearing Amelia’s melancholy in every scene before fully committing to her overwhelming madness in the film’s chaotic climax. Wiseman, making his screen debut, is perfectly cast as a bright young boy with an overactive imagination and some inner turmoil of his own. These two performances are crucial to anchoring the family drama and the metaphorical ghost story surrounding it.

Ultimately, The Babadook is an unsettling and unforgettable horror film that has more on its mind than jump scares or relentless gore. Kent is more concerned with how we deal with our demons, how we can learn to control them and what can happen if we let them start to take over, and tells that story through a wonderfully atmospheric, nightmarish descent into madness that’s crafted beautifully through expert sound design and cinematography. 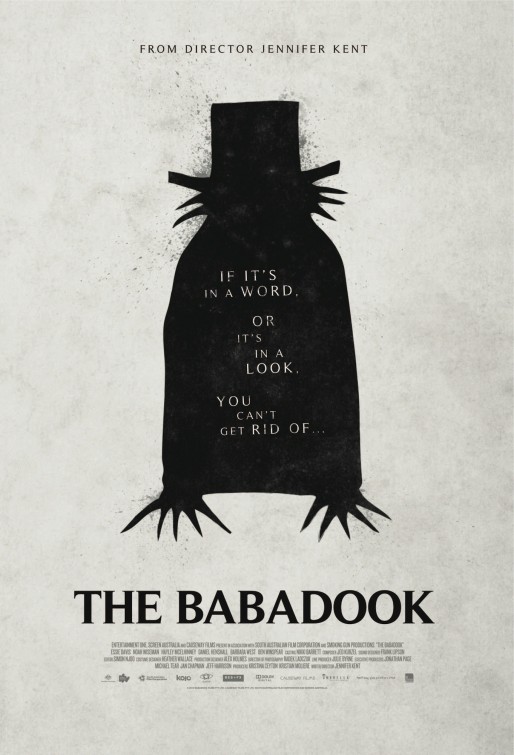