The list of today’s brightest comedy stars who were given their big shot by uber-producer Judd Apatow runs almost as long as one of his own movies – everyone from Seth Rogen and Jason Segel, to Amy Schumer and Lena Dunham have had a leg up from the comedy kingmaker. The latest rising star to get an Apatow-endorsed showcase is Silicon Valley star Kumail Nanjiani, who jumps on the trend of comedians playing themselves in semi-autobiographical stories. Co-written by Nanjiani and his wife Emily V Gordon, heartfelt, honest romantic comedy The Big Sick draws on Nanjiani’s experiences as a Pakistani immigrant, as a struggling standup and, most of all, the startling true story of the early days of he and Gordon’s relationship.

The film begins as a typical romcom, with Nanjiani playing an earlier version of himself eking out a living as a comic/Uber driver in Chicago. In a refreshingly realistic meet cute, he meets Emily (Zoe Kazan) after she heckles him during a gig. They hit it off, go home together and eventually, try as they might to avoid it, they end up in a steady relationship. The only problem is, Kumail’s traditional Pakistani parents (Zenobia Shroff and Anupam Kher) expect him to marry a good Muslim woman, and he doesn’t have the nerve to tell them about Emily.

This culture clash drives a wedge between Kumail and Emily and they break up, right before she is struck with a mysterious illness and winds up in a medically induced coma. As romantic comedy contrivances go, this one would be a whopper were it not based on real life. At this point, Emily largely disappears but the film does a good enough job in its first third of establishing her relationship with Kumail. Both actors are likeable and share an easy chemistry that makes their relationship feel genuine; the growing affection between them feels natural. Before she’s side-lined, Kazan manages to craft a well-rounded character who is so charming that her presence is felt even when she isn’t physically on screen.

When Emily takes ill, the film shifts into something different as Kumail strikes up an uneasy alliance with her parents, Beth (Holly Hunter) and Terry (Ray Romano) who arrive from North Carolina to take care of their daughter. Kumail and Emily’s parents are thrown together into an intense situation that’s difficult to deal with at the best of times, but given the status of Kumail and Emily’s relationship it’s tense from the off. The film takes its time in letting this relationship develop as the older couple feel out their daughter’s ex, and his commitment begins to win them over. Hunter and Romano are, of course, excellent here, as a fiercely protective mother and a bumbling dad just trying to do his best.

As has become par for the course with Apatow films – whether it be work he has directed or just produced, as he did here – The Big Sick runs long for a comedy. Often that means improv scenes that run on too long, but here Hello My Name is Doris director Michael Showalter uses that extra time to give characters room to breathe and flesh out the relationships between them. It’s striking just how human the film is and how much time Showalter gifts to even small supporting characters like Khadija (Vella Lovell), one of Kumail’s potential brides, and gives us a glimpse of her life and the problems she faces.

For a film to work so well as a romantic comedy while also layering in deeper topics and maintaining an impressive gag rate is a truly impressive feat. The Big Sick does it seemingly effortlessly, keeping the jokes funny and the tone light while weaving in insights on what it means to be a second generation immigrant, the bizarre sensation of missing weeks of your own life and the daily challenges of a a long-in-the-tooth marriage. Year on year, critics are quick to call time on the romcom but then a film as good as The Big Sick comes along, a film so full of feeling and genuine emotion that it shows the genre isn’t dead just yet. 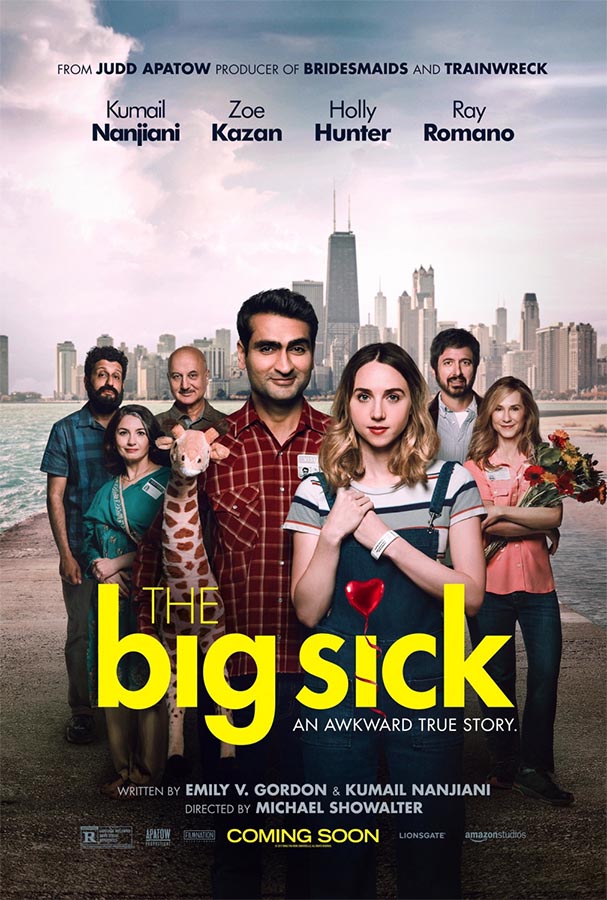