Tommy Wiseau, the enigmatic millionaire behind cult favourite and potential worst-film-ever The Room, is an irresistibly odd character. His baffling love-triangle drama has lived on in infamy since its disastrous premiere back in 2003, still filling midnight screenings the world over. But perhaps more interesting than the perplexing film itself – which Wiseau wrote, directed and starred in – is the story behind it, which Wiseau’s friend and co-star Greg Sestero documented in his tell-all book The Disaster Artist. That book found an admirer in James Franco, who brings the story to the big screen in the form of a riotous, crowd-pleasing comedy.

In a fittingly meta-move, Franco directs and stars as Tommy Wiseau in a film that is essentially a story of male friendship, charting the relationship between Tommy and Greg, played here by Dave Franco – James’ brother. The two men couldn’t be more different: Greg is handsome but shy, struggling to find his voice on stage; Tommy gives off a Count Dracula vibe but lacks any inhibitions or self-awareness. Regardless, they form a fast bond after meeting in an acting class and, using Tommy’s mysteriously bottomless pockets, set off to LA to make it in Hollywood. It’s a dream that of course never comes to fruition, which ultimately inspires Tommy to write and direct a film for himself and Greg to star in.

Franco’s transformation into Wiseau is extraordinary, donning heavy facial prosthetics and nailing his indeterminate Eastern European accent in a way that should get old but never does. The film finds much of its comedy – and it’s a very funny film – from Wiseau’s unusual speech patterns and off-kilter physicality, though there’s a genuine affection in his portrayal of a character who’s easy to mock. The reliance on faithfully recreated scenes from The Room could have felt like a cheap way to get big laughs but Franco’s obvious appreciation of Wiseau’s unfaltering ambition shines through in every scene. Plus, there’s a morbid fascination to seeing the genesis of some of the film’s most iconically inept scenes, from “Oh, hi Mark” to “You’re tearing me apart, Lisa!” and “I definitely have breast cancer”.

In amongst the laughs however, there’s a strain of tragedy and darkness that perhaps isn’t explored as much as it could have been but nonetheless adds some weight to a breezy film. Whatever he says nowadays, Tommy’s intention for his film was glory; this was supposed to be a powerful drama that would show the world his Brando-level acting talents and mark him out as a serious auteur. Everyone else can see just how badly the film is going – including Greg, who is eventually mortified by his very involvement in it – but Tommy can’t, and there’s something profoundly sad about that. Franco also doesn’t shy away from the darker side of his character, stopping short of making him a benign clown by delving into his erratic and often deeply inappropriate behaviour on set that saw his cast and crew regularly mistreated.

Both as a director and even as an actor, Franco has often struggled to be taken seriously, with his light-hearted stoner demeanour belying a wealth of talent and artistic ambition. This may be why he sees something of a kindred spirit in Wiseau and approaches The Disaster Artist with such obvious passion and commitment. The result is his best and most accessible film as a director, and one of the finest performances of his career, managing to turn the story of an awful film into something approaching a great one. Whether you’ve seen The Room or not, The Disaster Artist is an irrepressible cinematic experience that wraps its themes of male friendship, unfaltering ambition and the glory of abject failure in crowd-pleasing comedy. 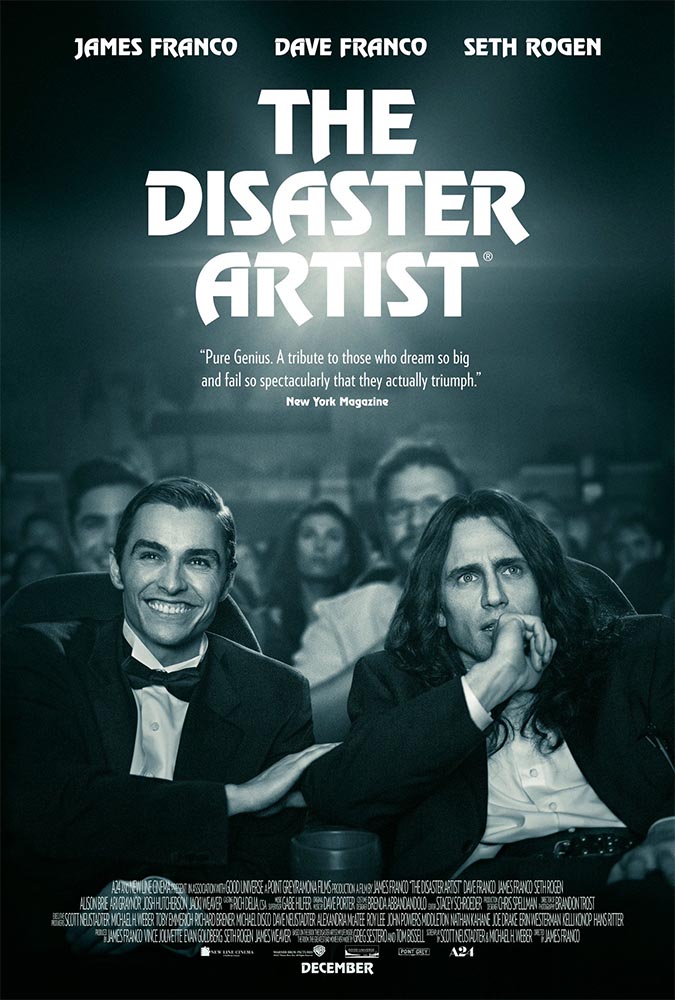