Adapted from Dennis Lehane’s short story – by the author himself – The Drop is a familiar tale of low-level criminals and one guy with a heart of gold who just wants to stay out of trouble. There’s nothing groundbreaking about the gloomy Brooklyn setting and the wise guys who inhabit it, but with a stellar cast and suitably moody direction from Belgian helmer Michael R. Roskam, this is a surprisingly absorbing, character-driven drama.

The good guy in the middle of this gritty milieu is Bob, played with a convincing Brooklyn accent by Tom Hardy. Bob is a quiet, mild-mannered and seemingly uneducated guy who gets by working at Cousin Marv’s Bar, a dive bar run by his actual cousin Marv (James Gandolfini). Like many bars in Brooklyn – in this film anyway – Cousin Marv’s has been taken over by Chechen gangsters who use it as a drop point for large sums of cash.

Bob’s simple life gets a whole lot more complicated when Cousin Marv’s is held up by two gunmen and the Chechen’s money is stolen. This brings him to the attention of kindly cop Det. Torres (John Ortiz), who seems to know a lot more than he lets on. As if that wasn’t enough, Bob finds an injured pitbull puppy in a trash can outside the house of a young woman named Nadia (Noomi Rapace) and the two strike up a tentative relationship as they care for the puppy. The only problem is the menacing Eric (Matthias Schoenhaerts), who has an attachment to both the dog and Nadia and a nasty rep in the neighbourhood.

Despite a shift in location – swapping Lehane’s beloved Boston for Brooklyn – The Drop will be recognisable to anyone familiar with Lehane’s other work, which has been adapted into such films as Mystic River and Gone Baby Gone. The dingy urban locales and working-class criminal characters, not exclusive to Lehane of course, have a seen-it-all-before air but Roskam is effective in slowly building tension, with the threat of violence lurking in every scene. Over the first two deliberately paced acts, he positions all of the elements for an explosive finale that in some ways is exactly what you might expect, but with a juicy twist that you certainly won’t.

In the middle of it all is Hardy’s Bob, an intriguing character who, on the surface, seems too placid for the world of nasty criminals he inhabits but, as ever with Hardy, there is enough of an edge to suggest Bob isn’t just the humble bar-tender. It’s another excellent performance from Hardy who can quietly brood with the best of them and he relishes revealing the layers to a complex character.

The supporting cast give nicely textured performances, from the late Gandolfini doing what he does best one last time and Rapace making the most of a typically underwritten role. The standout however is Schoenhaerts, the Belgian actor who has given knockout performances in Roskam’s Oscar-winning Bullhead and Jacques Audiard’s Rust & Bone. The Drop marks his English-language debut and he adopts an impressive Noo Yawk accent as a character who’s own hidden depths provide a nice parallel to Bob’s. Their final showdown is a stunner from both actors.

Despite its familiar genre trappings and occasionally stock supporting characters, The Drop is a taut and moody thriller with a handful of impressive performances. The slow-burning first two acts give way to a tense and gripping payoff that’s perfectly handled by Roskam and his stellar leading man Hardy. 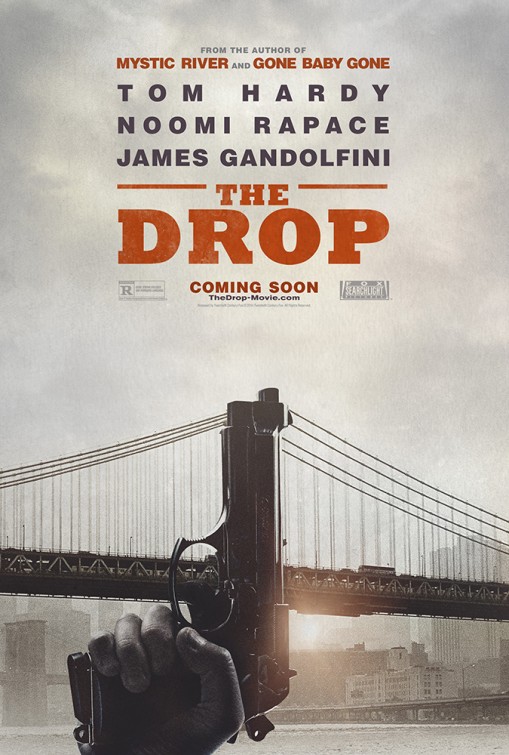