Since John Hughes revolutionised the teen movie in the Eighties with a slew of classic high school-set comedies, the teen movie became a specific genre of its own that many have tried to master but failed miserably. Every few years, a film comes along and forces its way into the canon: Clueless, 10 Things I Hate About You, Mean Girls, Superbad, Easy A. Instantly joining this prestigious company is Kelly Fremon Craig’s edgy debut The Edge of Seventeen, a funny and angsty portrayal of teenage life that will be painfully familiar to anyone who’s ever been a teen.

The film stars Hailee Steinfeld as Nadine, a socially awkward high school junior struggling to find her place in life. Her beloved father died a couple of years ago, leaving her alone with a mother (Kyra Sedgwick) who doesn’t seem to get her and a brother, the popular, handsome Darian (Blake Jenner), who she can’t stand. She finds solace Krista (Haley Lu Richardson), her best friend and seemingly the only person who will indulge Nadine’s snarky self-loathing.

When Nadine walks in on Krista in bed with Darian, she reacts in the most immature way possible and gives her friend an ultimatum – him or me – that doesn’t end particularly well. Nadine begins to spiral and, without her best friend and with family relationships even more fractious than usual, she has nowhere to turn. Believing herself too wise beyond her years to mix with her peers, Nadine finds a confidante in her brilliantly sardonic teacher Mr Bruner (Woody Harrelson), who matches her eye-rolling sarcasm at every turn.

The plot here could have easily been a whistle stop tour of all the old teen movie clichés: Nadine even refuses to pick up on the romantic advances of the sweetly awkward Erwin (Hayden Szeto) in favour of making a move on the school bad boy. But there’s an honesty to everything that happens here that elevates it above the genre norm, providing a startlingly truthful exploration of teenage angst and social anxiety while touching on more serious mental health issues. Seeing Nadine berate herself in the bathroom at a party for being weird is just one of the many small moments here that perfectly encapsulates that feeling of hopeless awkwardness and insecurity that can consume teens.

Hailee Steinfeld – who scored an Oscar nomination at the age of fourteen for the Coens’ True Grit – is given the tricky task of making us root for a character who could’ve been very difficult to like. She proves to be more than up to the task, conveying the various sides of Nadine’s confused personality with a natural charisma and deft comic timing. Nadine’s outward demeanour is tough and cynical, using her wit and verbal dexterity to mask a deep vulnerability, though not necessarily just from others. At times she acts that way around herself, like she’s trying to convince herself of her own bravado, as if that’s who she wants to be rather than who she actually is.

Craig’s whip-smart script immerses us in Nadine’s self-absorption to the point that when other characters reveal more of themselves, it’s as surprising to us as it is to her. She is so wrapped up in herself that she can’t believe anyone would be any different to how she perceives them, but everyone in her life upends those expectations in some small way. Could Erwin have friends and interests away from her? Is it possible that maybe Darian has struggles of his own beneath that admittedly smug exterior? Of course, but it takes Nadine far too long to realise, leading to some painfully honest scenes but ultimately a hopeful ending.

The Edge of Seventeen feels like a strikingly accurate portrait of teenage life – a time where everything feels like it’s life-or-death – and it conveys that feeling with both humour and sensitivity. It does what every good teen movie should do but with a fresh, insightful twist, all of it anchored by a performance from Hailee Steinfeld that confirms her as one of the most exciting young talents around. 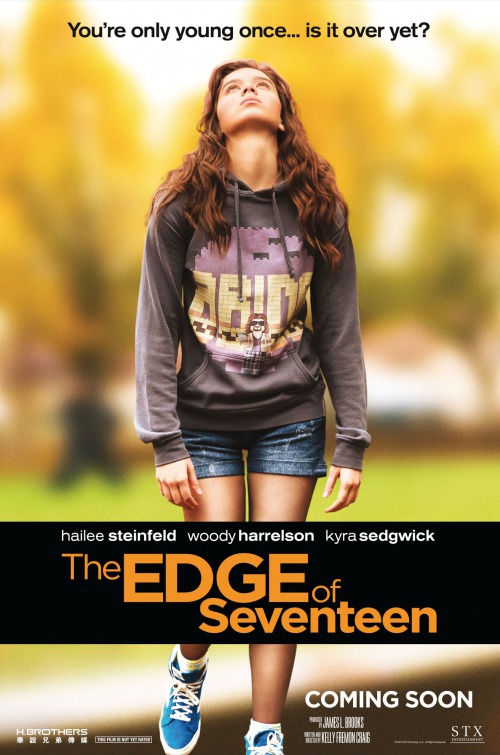