Given that The Fate of the Furious is the eighth entry in the surprisingly enduring Fast & Furious franchise, we all know what to expect from a Fast film by now: muscular men in muscle shirts driving muscle cars, scantily clad women cheering them on, increasingly outrageous action set-pieces and, most important of all, family. As much as the series’ focus has shifted from street racing toward grand-scale heists and globe-trotting espionage, it has also doubled down on its focus on the family at the centre of it all. Familial themes powered both Fast & Furious 6 and Furious 7 and are once again integral here, with one particularly juicy hook: fiercely loyal patriarch Dom Torretto (Vin Diesel) has turned on his makeshift family.

It isn’t the first time the series has done this, with Dom’s long time beau Letty (Michelle Rodriguez) once suffering from the classic soap opera trope of amnesia and turning on her crew. This is exponentially bigger though: Dom’s entire existence in this series at this point is essentially driven by his dedication to family, so it would take something really special to make him flip. Notorious hacker Cipher (Charlize Theron) has got her hands on the one thing that could give her control over Dom and she plans to use him to steal a nuclear arsenal and trigger World War III. The intricacies of this plot and Dom’s plan to escape Cipher’s clutches don’t particularly add up but you get the sense that watertight plotting isn’t high on the agenda here. As Cipher, Theron’s stillness and composure adds a nice contrast to the musclebound dudes and their macho posturing, but when the action gets going, she’s sadly relegated to shouting at screens.

Setting Dom on a collision course with his own family is a smart twist on the formula for a series that has built up its own mythos, half-stumbling into a rich cinematic universe. As well as the core team – including hackers Tej (Ludacris) and Ramsey (Nathalie Emmanuel), and loudmouth Roman (Tyrese Gibson) – there’s a deep bench of characters that can be called on and Fate uses them well, particularly Deckard Shaw (Jason Statham), the Furious 7 villain who’s now been broken out of prison and coerced into fighting for good. Given the events of previous films (spoiler: he killed Han!), it makes no sense whatsoever that the team would ever warm to him but the physicality and deadpan comedy that Statham brings to the role is invaluable. His chemistry with Dwayne Johnson, returning as DSS agent Hobbs, is the highlight of the film as their macho threats eventually soften into a bona-fide bromance.

For a series that is always trying to one-up itself in the action stakes, Fate faced the difficult task of trying to top Furious 7, which bunny-hopped supercars between skyscrapers and parachuted cars out of a plane. Charged with doing so is director F. Gary Gray, the reliable journeyman who scored a big hit with 2015’s NWA biopic Straight Outta Compton. In terms of set pieces, Gray and screenwriter Chris Morgan come up with some inventive sequences that haven’t been done before, including a mass pile-up of zombie cars in New York City that embodies the gleeful chaos that has come to define the Fast movies. The film also opens on a nice throwback to the street racing that launched the franchise, with Dom taking on the owner of Havana’s fastest car in – you guessed it – Havana’s slowest car. No half measures here, and no prizes for guessing who wins…

But as grand as the set pieces are here, nothing is quite as joyous or gloriously daft as the best moments of the series. After the opening street race and an excellent prison break out scene, the film gradually becomes more plodding and somber and the big, silly grin begins to fade. The film’s biggest showpiece – the submarine vs cars showdown splashed all over the trailers – is only intermittently exciting, dragging on for much longer than is necessary. That’s not to say that The Fate of the Furious isn’t an enjoyable film, though the cracks are beginning to show. Just as Fast Five reinvented the series in a way that has now lead to four hugely entertaining (and profitable) films, it may be time to change things up a little bit for the ninth instalment and beyond. 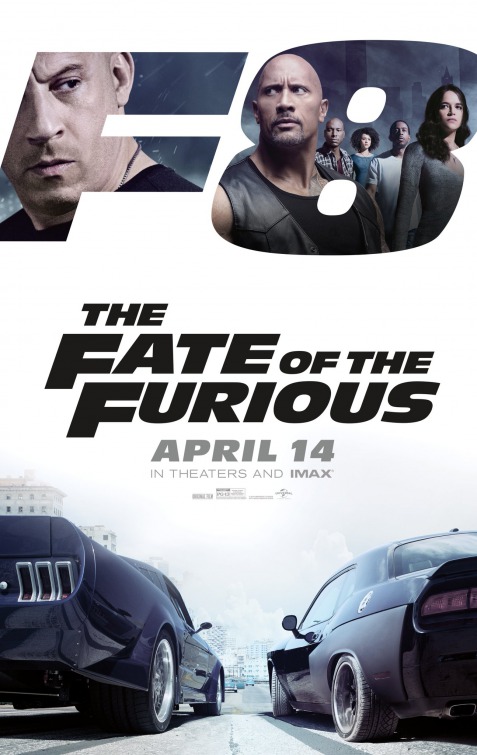