Though only on the outskirts of Disney World and the sun-kissed tourist hot spots that surround it, the poverty-stricken motels and housing projects of Sean Baker’s The Florida Project feels like a world away. Just as he did in his 2015 breakout Tangerine, which centred on a pair of transgender prostitutes in LA, Baker explores life on the margins of society, focusing on a six year-old named Moonee (Brooklynn Prince) and her mother Halley (Bria Vinaite). They live together in an extended-stay motel named the Magic Castle, eking out a living selling counterfeit perfume to rich tourists.

The film largely takes place from the perspective of Moonee who, despite her mother’s continual struggle to stay afloat, is happy. Free from school for the summer, she patrols the grounds of the Magic Castle with her best friend Scooty (Christopher Rivera) and , Jancey (Valeria Cotto), a new girl from the neighbouring Futureland building. Together they annoy the neighbours, try to get tips from stray tourists, blag free ice cream and cause all kinds of problems for the building manager, Bobby (Willem Dafoe).

Things are less rosy for Halley, who is struggling week-on-week to come up with the rent money. Still young herself but with seemingly no family around and very little in terms of career prospects, Halley hustles cash however she can get it, whether it be scamming tourists or eventually taking a much darker path. This primarily happens off screen though and we only get a whiff of it when Moonee does, though we of course understand the full scope of what’s going on a lot better than she does. That’s what ultimately makes the film so powerful, as we see Halley’s struggle to protect her daughter – who she obviously loves more than anything – from the harsh realities of life below the poverty line. The juxtaposition of Moonee’s innocence and more precarious reality of her life is heart-breaking, eventually building to a deeply moving finale.

Just as he did in Tangerine, Baker has largely filled the cast with unknowns, unprofessionals and real people, with gives everything an edge of authenticity. Both Prince and Vinaite are newcomers to acting, the latter of whom Baker found on Instagram, but both acquit themselves well. Prince is endearing and charismatic but in a natural way, never becoming overly precocious or too cute. Baker also isn’t afraid to let her be bratty and troublesome at times, like any normal kid is. Vinaite also proves to be a wonderful find, finding many shades to a character who veers wildly from joyous highs to startling lows, her charm and playfulness giving way to her volcanic temper at the drop of a hat. Her performance recalls Sasha Lane’s in Andrea Arnold’s stunning American Honey from last year, which shares much of this film’s DNA.

Dropping in a well-known face among all of these unknowns could have derailed the film, and few actors have a face as recognisable as Willem Dafoe. Yet the veteran actor slips into the ensemble perfectly, giving one of the best performances of his career as a man continually exasperated by his residents but, beneath his constant complaining, there’s  a warmth and empathy to him. He genuinely cares for the people in his building and tries to look out for them as much as he can, whether it be chasing off a potential predator or helping Halley find a room on the one night a month they have to move out of his motel.

Baker is a filmmaker of huge empathy and approaches his characters without judgement, shining a light on characters that don’t often make it to the big screen. In The Florida Project, he doesn’t shy away from the tougher aspects of his characters’ lives but he also doesn’t revel in it; this isn’t miserable poverty porn that looks down on the less fortunate. It is a film about the human spirit and resilience in the face of adverse conditions and day-to-day struggles, and Baker captures all of that in an energetic, vibrant and powerful film that fully earns its gut-wrenching conclusion. 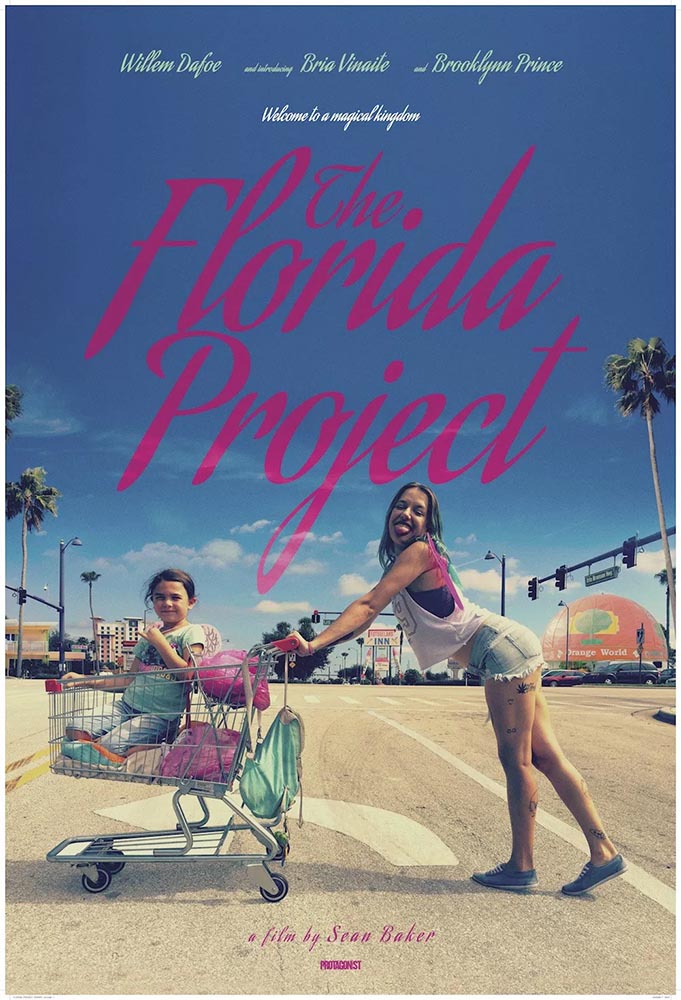