There’s no mistaking a Wes Anderson film. The writer/director has one of the most distinctive styles in cinema, sticking to his brand of intricately detailed deadpan comedies and ignoring his detractors along the way. Those naysayers, who find his obsessive attention to detail stifling and struggle to connect with his affected characters, are unlikely to be won over by The Grand Budapest Hotel, a film that is perhaps the most Wes Anderson-y film Anderson has ever made.

The good news is that it’s one of his best – and most fun – films. Set in the fictional Eastern European country of Zubrowska, the film adopts a Russian-doll style structure with a present day author (Tom Wilkinson) telling the tale of his time at the slightly downtrodden Grand Budapest Hotel in the 1960’s, where he met the hotel’s owner Mr. Moustafa (F. Murray Abraham). Moustafa in turn tells the writer (played in these scenes by Jude Law) about the 1930’s heyday of the hotel and its legendary concierge, M. Gustave (Ralph Fiennes).

Gustave is one of Anderson’s best characters, played with gusto by Fiennes in a rare but excellent comedic turn. Gustave has a hand in everything that goes on at the hotel, keeping on top of the staff and making sure all of his guests are happy, particularly the wealthy older ladies who are prone to summoning him to their rooms.

One such guest is Madame D., played by an almost unrecognisable Tilda Swinton caked in old lady makeup. After a visit to the Grand Budapest, Madame D. is soon found dead and in her will, she leaves a priceless painting named Boy With Apple to Gustave. This kickstarts the film’s central caper in which Gustave makes off with the painting and the woman’s nefarious sons (Willem Dafoe and Adrien Brody) give chase.

All of Anderson’s hallmarks are present in The Grand Budapest Hotel: The immaculately detailed static shots; the quirky characters filled out by the usual Anderson repertory players; the intricate moments of whimsy, from a prison break with a miniature tool kit to a Mexico shaped birthmark; there’s even a few scenes of Fantastic Mr. Fox-style stop-motion animation. As ever though, Anderson’s delicately constructed world is underpinned with a sense of melancholy and here it’s the spectre of war looming over Zubrowska that provides a dark backdrop to the comedy and whimsy.

The only issue the film seems to have is a saggy run time that seems to drag things on for a little longer than necessary, an unusual problem for a filmmaker of Anderson’s precision and control.

Nonetheless, The Grand Budapest Hotel is pure, unfiltered Anderson and all the better for it. Some will roll their eyes at the fanciful jokes and affected performances but fans of the Texan’s artisan style will delight in all the little visual touches and crack a warm smile at cameos from the likes of Bill Murray, Jason Schwarzman and Owen Wilson. It’s a film as ornate and delicious as the pastries the hotel’s guests indulge in, but with enough substance beneath the fluffy exterior to satisfy. 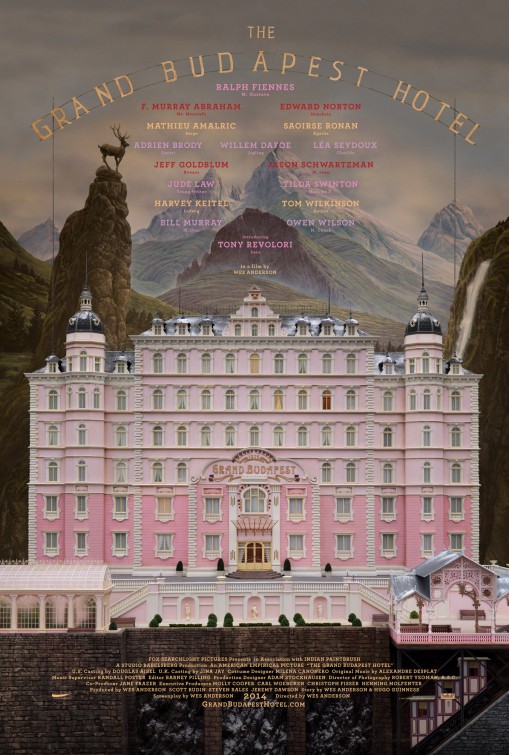