After the exciting failure of Smokin’ Aces and the fun-but-bland blockbuster The A-Team, the memory of director Joe Carnahan’s 2003 breakthrough Narc was fading fast. Thankfully his latest effort The Grey, a manly genre pic pitting Liam Neeson and his team of oil drillers against the harsh Alaskan wilderness, is a welcome return to form.

Ditching the kind of Tarantino-wannabe dialogue and twisting plot that sunk Aces and packing in more heart than The A-Team, Carnahan has taken a simple story and crafted an enthralling survival horror with subtle flair. His choice of leading man goes no small way to the film’s success as Neeson ably anchors proceedings with another strong, grounded performance as Ottway, a sharpshooter hired to keep wolves away from the men at an Alaskan oil drilling operation.

When a passenger plane crashes, leaving the men stranded in the frozen tundra, Ottway assumes the position of leader, rallying the remaining survivors and attempting to devise a plan to make it out of there alive. The crash is realised with brutal intensity and the following scene of Ottway nursing a dying passenger until he passes away establishes his strength but also a pleasing sign that the film takes its characters and their lives seriously, rather than just being meaningless fodder for the plot.

After the first night, it’s clear the team are being hunted by a pack of territorial wolves that begin to pick them off, one by one. This prompts the men to start making their way toward a nearby tree line, hoping to gain some kind of sanctuary. Along the way, the gang run into numerous issues, including altitude sickness, giant cliffs, ice cold rivers, in fighting and, of course, the wolves stalking them every step of the way.

Some scenes ramp up the tension to palpable levels, particularly an attempt to safely cross from a cliff’s edge to some adjacent trees using a makeshift rope which naturally doesn’t work out quite as well as hoped. As well as the tense action sequences, there’s also enough heart and emotion involved to help keep the characters engaging enough to care about their journey. Each man has their own, admittedly clichéd, back story but it’s Ottway’s constant pining for his dead wife that provide the real emotional heft and Neeson brings a quiet power to the performance.

Despite the marketing of the film desperately trying to make it seem like some cheesy Liam Neeson vs. Wolves movie, The Grey is thankfully so much more. Carnahan wisely avoids the kind of blood thirsty payoff the trailers tease, particularly in the last scene which thankfully cuts at a crucial moment that otherwise could’ve sunk the entire film. It isn’t perfect, it takes the men a little too long to get where they’re going a couple of times and the appearance of the wolves is a little too convenient, but Carnahan, Neeson and co-scripter Ian Mackenzie Jeffers have made an engaging survival thriller that plays like a deeper, muscular version of The Edge with far more genuine thrills and a stronger central performance. 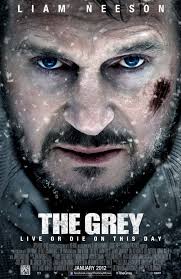