French action guru and Luc Besson prodigy Pierre Morel, the man best known for French parkour thriller District 13 and for launching Liam Neeson’s career reinvention as an action star with Taken. He’s now taken another Hollywood star better known for serious dramas than kicking ass and put him front and centre of a violent jaunt across Europe in The Gunman.

The star in question this time is double-Oscar winner Sean Penn who stars as Jeff Terrier, a retired marksman who finds himself the target of a conspiracy to wipe out the team who assassinated the Democratic Republic of Congo’s Mining Minister a few years earlier. With the rest of his team dead, Terrier goes on the run, landing in Barcelona where former associate Felix (Javier Bardem) is shacked up with Anna (Jasmine Trinca), the girl Terrier had to leave behind.

Terrier is chased through picturesque locations by a horde of nameless goons on the way to working out who is after him and why, liaising with some reliable character actors along the way, including Ray Winstone, Mark Rylance and Idris Elba.

The film makes it pretty clear from early interactions which characters are going to turn out to be the baddies so the various twists and turns of the plot largely fall flat, especially as it’s all a little bit too hard to follow for such a straightforward story. The script gets mired in trying to make the story more tangled than it actually is which dilutes the simple pleasures of watching the damaged, guilt-stricken protagonist blaze a trail through a beautiful European city.

It’s these scenes that play to Morel’s strengths. While most action directors now rely on extreme amounts of shaky cam, Morel manages to generate the same kinetic feel while staging clean, well-defined fight scenes that make good use of space and location. The choreography isn’t overly intricate but it’s always easy to tell who’s who and what they’re doing.

Involved in every one of these scenes is the surprisingly beefed up Penn whose trademark intensity brings credibility to the role and indeed the film itself. The character is more interesting and complex than might be expected (or necessary) in a film like this. He’s eaten up by guilt over the repercussions of his last job and determined to make good, all the while dealing with a serious bout of lovesickness over Anna and confusion and anger at the attempts to wipe him out. Penn of course wears all this well; it’s not one of his vintage performances by any means but he gives Terrier an integrity that makes it easier to root for a guy who until recently killed people for money.

Penn also takes it all very, very seriously, as does Morel, often to the film’s detriment. This is an extremely silly film but dresses up its pulp thrills with a grim, solemn tone that makes it all the more unintentionally funny when the action takes a turn for the ridiculous, like when Penn knocks out a woman he assumes is in on the conspiracy or a key character is gored by a bull. Javier Bardem seems to be the only one who understands he’s in a pretty silly movie, hamming it up every time he’s on screen, flouncing around drunk in most of his scenes.

Ultimately, The Gunman is solid genre fare. Penn makes for a convincing and nuanced action hero and Morel knows how to stage action but the reluctance to ever fully embrace its own silliness prevents it from being a real cult joy. 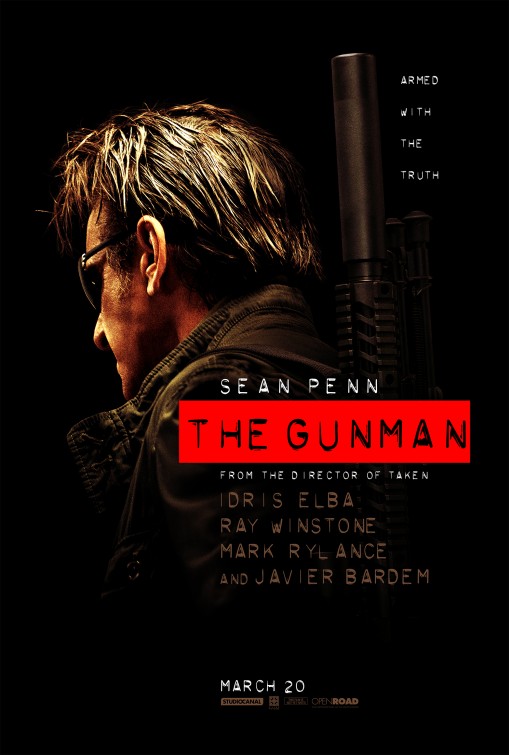