Back in 2011, Bridesmaids proved to anyone who was in doubt that it was possible to make a female-led, heart-felt but potty-mouthed comedy that wouldn’t look out of place in Judd Apatow’s male-centric oeuvre. Now with The Heat, director Paul Feig puts that same female spin on the buddy cop formula, with Sandra Bullock and Melissa McCarthy as the archetypal odd couple at the centre of proceedings.

Bullock, who hasn’t been in a good comedy in over a decade, is back on form as straight-laced, uptight FBI Special Agent Ashburn. She’s unpopular at the bureau for always showing up her colleagues – even the sniffer dogs – but nonetheless, she’s a good agent and is inline for a promotion if she can help take down a mysterious and violent Boston drug-lord who is hacking up his competition and leaving their body parts strewn around the neighbourhood.

She is sent to Boston and forced to work with McCarthy’s foul-mouthed, hard-edged Detective Mullins who knows the area and all the local scumbags. Particularly her brother Jason (Michael Rapaport), an ex-con who may or may not be involved with the man Ashburn and Mullins are trying to track down. Further complicating the mix are DEA Agents Craig and Adam (John Bakkedahl and SNL’s Taran Killam) who have been tracking the case for years and aren’t too happy about the FBI and Boston PD stepping on their toes.

The plot is pretty much the same as every buddy cop movie ever. If you’ve seen any odd-couple movie before, you won’t be surprised to see the initial dislike and mistrust between the two turn into begrudging respect and, eventually, friendship. The script, from frequent Parks & Recreation writer Katie Dippold, does have some nice gags and character beats in there – Ashburn’s a lonely cat lady but the cat isn’t hers, Mullins keeps running into desperate one-night stands – but what elevates the film above an exercise in rote genre clichés is the two stars, and not just because they’re women.

Bullock and McCarthy make an excellent chalk-and-cheese team, their very different sensibilities complementing each other perfectly. Bullock is essentially the straight-woman but also gets plenty of opportunity to cut-loose while McCarthy goes big with the kind of hilarious, expletive-laden adlibs that earned her a surprise Oscar nod for Bridesmaids. She seems to be typecast in this kind of loud, abrasive role at the moment and no doubt it’s going to get old pretty soon but right now, her ability to make every line feel completely off-the-cuff still feels fresh and laugh-out-loud funny.

There are laughs to be had from the supporting cast as well, particularly Mullins’ family. Made up of stereotypical Boston tough guys who drop their R’s and always seem on the brink of a fight, like a spot-on parody of the Ward family from The Fighter.

Elsewhere, John Bakkedahl’s highly-strung albino DEA agent manages to steal a couple of scenes too, though Taran Killam is tragically left with very little to do, as is Marlon Wayans, who is largely relegated to would-be love interest duties. It’s Always Sunny in Philadelphia’s Kaitlin Olsen pops up in a nice cameo as a heavily-accented Bulgarian drug dealer.

Despite a lack of originality and a pacing issue that leaves the film feeling every bit of its 117 minute run-time, The Heat is an irreverent buddy cop flick that manages to be profane and violent without ever feeling mean-spirited, the way something like The Hangover Part III did for example. The chemistry between the two leads raises otherwise cookie-cutter material to a higher-level and shows that action comedies don’t have to be an all-male affair. 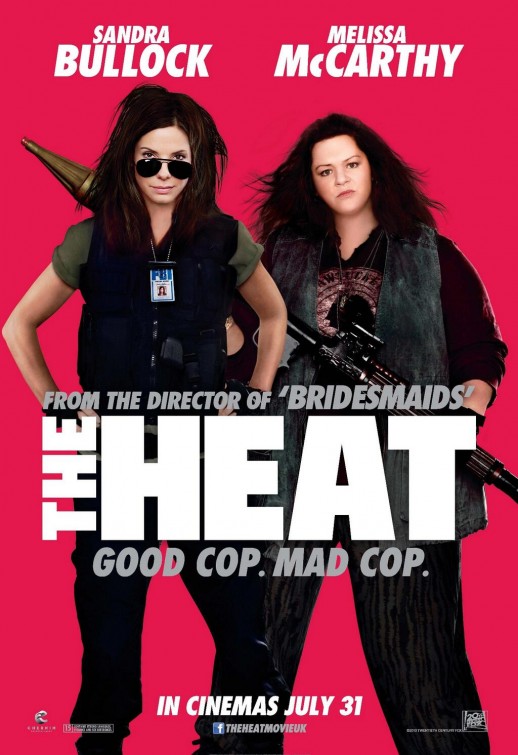