College graduate Skeeter enlists the help of Jackson, Mississippi’s African American maids to write a novel from their point of view, telling of the struggles and hardships of their day to day life.

Kathryn Stockett’s novel The Help has been an international best-seller, shifting over five million copies and spending 100 weeks on the New York Times bestsellers list. Adapting the novel for the screen is actor Tate Taylor, taking on writing and directing duties and his film is perhaps exactly what you would expect from the book. It’s most definitely the film you would expect from the marketing, so if the trailers showing an inspirational, heart warming tale of a white woman giving a voice to the browbeaten African American maids of Jackson, Mississippi in the 1960’s do nothing for you, then it’s unlikely the film will change your mind.

The white woman in question is Skeeter (Emma Stone), a Jackson girl who’s gone off to college in Ohio and come back with ideas of being a writer. After witnessing the treatment of the African American maids at the hands of her socialite friends, especially the icy queen bee Hilly Holbrook (Bryce Dallas Howard), Skeeter is inspired to tell the story of these women who raise rich white people’s children yet are deemed not good enough to use the same toilet. Skeeter manages to convince her friend’s maid Aibileen (Viola Davis) and Hilly’s former cook Minny (Octavia Spencer) to tell their stories and expose the struggle they endure on a daily basis.

When Hilly fires Minny for using her toilet, the only job she can find is working for white-trash outcast Celia (Jessica Chastain), who wants Minny to work only during the day when her husband isn’t home to create the illusion that Celia is a capable housewife. The feisty Minny is at first exasperated by Celia’s enthusiasm and cheer but offers her good advice and is there for her during one of the film’s most heartbreaking scenes.

Skeeter’s novel grows and grows as more maids begin to provide their testimonies and she becomes increasingly suspicious as to the whereabouts of her own maid who, after 29 years with the family, has disappeared while she was at college. Her mother Charlotte (Alison Janney) claims she quit but it’s clear she’s hiding something, the revelation of which provides another extremely moving scene and a chance at redemption for Charlotte.

Heartbreaking and moving scenes are definitely the film’s strong suit, driven forward by a fantastic cast. Emma Stone is perfectly cast as the smart and likeable Skeeter and centres the movie though she is surrounded by far flashier turns. Viola Davis can be a powerful actress, as seen in her Oscar nominated turn in Doubt, and she is superb here. Though the role is fairly limited, she fills the noble Aibileen with a quiet dignity. Octavia Spencer is almost as impressive as the fast talking, fiery tempered Minny and like Davis, Spencer brings bags of life to a potentially one dimensional character. Threatening to steal the show is Jessica Chastain, who makes white trash Celia a funny, warm and infectious presence.

Unfortunately, the film around these performances is lacking in any real bite, happier to remain in the safe territory of cartoon racists and comedy comeuppance than making any real commentary on the events of that era. It is an enjoyable and moving film, filled with emotionally charged scenes that are well acted by a superb cast, it’s just a pity that this is undercut by the nagging feeling that you’ve seen this kind of feel good fable a thousand times before and imagining the film it could’ve been if it were a tad braver. 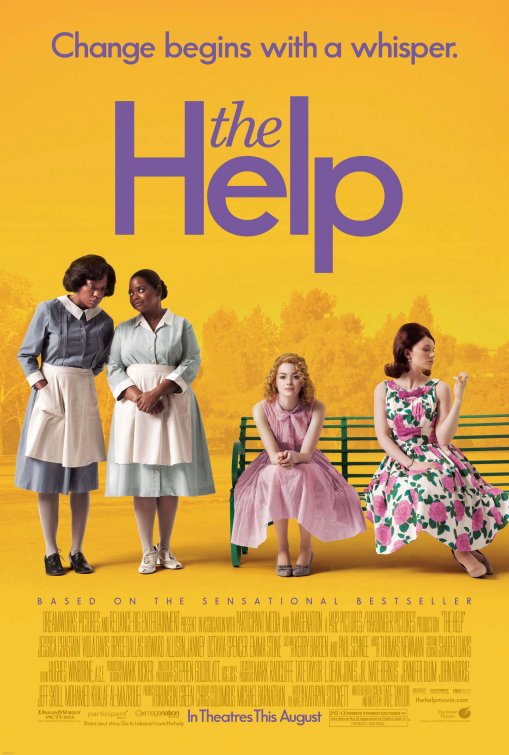