It’s no surprise to learn that The Hitman’s Bodyguard, the new action comedy from The Expendables 3 director Patrick Hughes, was majorly retooled to fit its leading men. What began life as a standard globe-hopping action flick became a star-driven buddy comedy to accommodate Ryan Reynolds and Samuel L Jackson, who manage to make this overlong and tonally uneven piece of late summer fluff mildly entertaining.

Reynolds plays Michael Bryce, a smart-mouthed ‘protection agent’ who is reeling from a job gone very wrong. With his reputation in tatters, he has no choice but to take a job from his Interpol agent ex (Elodie Yung), transporting notorious contract killer Darius Kincaid (Jackson) from Manchester to the Hague. Playing almost exactly to type, the two men make a classic buddy comedy pairing: smart-mouthed charmer Bryce is a stickler for the rules – “boring is good” is his motto – while Kincaid is a foul-mouthed badass who doesn’t have a motto, but if he did it would almost certainly involve the word “motherfucker”.

Both men are enjoyable in these roles and bounce off of each other well. Jackson in particular relishes the opportunity to ham it up, delivering the kind of dialled-up-to-11, expletive-laden performance that only he can provide. The two characters are thrown together reluctantly, with Bryce only taking the job to rebuild his career and get close to his ex while for Kincaid, it’s all about making it to the Netherlands alive to trade testimony for his wife’s freedom. It’s a classic, Midnight Run-style buddy comedy set-up: these guys don’t like each other, but they need other and hey, maybe they’ll eventually respect each other!

That’s all fine and well but this comedy plot feels completely at odds with the action plot that’s going on alongside it. Kincaid’s testimony is required in the trial of a Belarusian dictator (Gary Oldman) accused of heinous war crimes that. He has any number of goons running around Europe chasing down Kincaid and Bryce with a view to stopping that testimony and blowing up Manchester, London and Amsterdam along the way. It feels tone deaf to wed this kind of serious material, which so closely echoes real life events, to a frivolous, knockabout comedy about a hitman and a bodyguard who can’t get along. It feels very much like two different films crudely welded together, with comedic scenes of ultraviolence and gore supposed to garner laughs right alongside scenes of a dictator murdering his people.

The bigger problem perhaps is that the film is neither funny enough to succeed as a comedy or in any way thrilling enough to be an enjoyable action film. It works best as a comedy, with Hughes managing a couple of comedic set pieces that work – a slow-motion bar fight set to Lionel Ritchie’s Hello is a highlight – and his two leads bringing their natural charisma to their roles. But then the comedy is broken up by pedestrian action scenes that offer nothing we haven’t seen done before, and better. The film grinds to a halt every time it goes through the motions of a generic shootout or another big explosion or a sub-Bourne display of hand-to-hand combat.

When a film has stars like Reynolds and Jackson on board, it’s going to be at least watchable and The Hitman’s Bodyguard is certainly that. It’s the kind of middle-of-the-road, star-driven vehicle tailor-made for the August dumping ground with little to recommend it beyond its compelling leads who, frankly, are better than the material deserves. 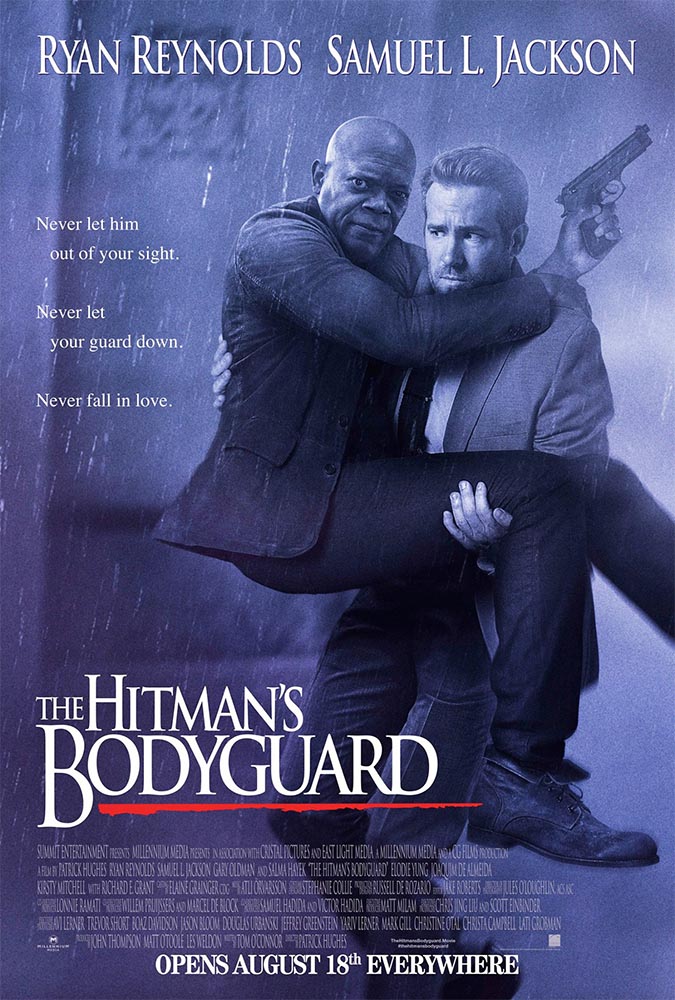