The Hunger Games series is perhaps the only young adult series likely to conclude its run with a film as grim or tense as The Hunger Games: Mockingjay – Part 2. This is a series that has always felt smarter and more relevant than its contemporaries and in this final instalment, director Francis Lawrence has delivered a finale that, for the most part, provides a thrilling send off to the franchise.

Picking up where Mockingjay – Part 1 left off, the film finds our heroine Katniss Everdeen (Jennifer Lawrence) still struggling with the post-traumatic stress of two stints in the Hunger Games and her friend/lover Peeta (Josh Hutcherson), brainwashed by the evil President Snow (Donald Sutherland), trying to kill her.

Katniss is hell-bent on ending the reign of Snow and the one-percenters of the Capitol, freeing the other districts from their rule. Going against the command of rebel leader Alma Coin (Julianne Moore), she leads a crew throw the ruins of the war-torn capital, avoiding boobie traps that turn the city into a Hunger Games-style arena. Some of the action scenes are incredible, including a deadly oil-slick through the city streets and an encounter with some gruesome, eyeless creatures in the sewers beneath that feels lifted from a horror film.

Between the action scenes, there are quieter character moments that give Peeta a chance to wrestle with his conflicting emotions and try to regain a grasp on reality. The brainwashing he underwent at the Capitol has left him broken and struggling to keep a handle on what is a real memory and what isn’t. There’s a deep sadness in seeing how far both Peeta and Katniss have come since the first film, both of them mentally shattered and changed forever. There’s a sense throughout that even Katniss does fulfil her mission of bringing down Snow, she’ll still never find any semblance of happiness.

Somewhat on the outside of this is Gale (Liam Hemsworth), the third-wheel in the would-be love triangle that the series has wisely spent very little time on. In fact, he seems like the one most invested in the romance, worrying about Katniss’ feelings for Peeta, while Katniss herself has more on her mind than which boy she likes best.

One of the series’ strongest points, particularly in the last two films, has been the use of the media and propaganda as a means of controlling the masses. Again here we see both sides trying to spin things to gain an upper hand in the war, with the rebels master spin doctor Plutarch (the late Phillip Seymour Hoffman) and the video crew (lead by Natalie Dormer) using Katniss as a figurehead for the rebellion and staging battle scenes to give the impression that they’re winning. Meanwhile, the Capitol is showing its people fear-mongering videos about jealous poor people coming to take what’s theirs.

More than ever before though, there’s the sense that the rebels – and particularly Coin – actually aren’t any better than the regime they’re trying to overthrow. With the prospect of winning the war becoming something approaching a real possibility, the thought of what will happen if they do win increasingly worries Katniss as her relationship with Coin begins to deteriorate. These political themes and the obvious parallels to the real world are partly what raise this series above the young adult pack and while the tone here is never less than deadly serious – some levity would’ve been nice – there’s a weight to these films that other franchises, young adult or otherwise, simply don’t have.

Part of the credit for that must also go to the cast that has accumulated over the course of the four films. Series favourites Effy (Elizabeth Banks) and Cesar (Stanley Tucci) are only given very brief appearances here but their presence is always welcome. So too is the sight of Phillip Seymour Hoffman in his final film role and it isn’t hard to see where his character would’ve fitted into certain scenes were it not for his tragic passing during filming. Other series regulars like Donald Sutherland, Sam Claflin, Jena Malone, Natalie Dormer and Woody Harrelson fill out the impressive cast.

But as ever this is the Katniss show and Jennifer Lawrence, who has elevated each and every one of these films with her performance, does so again with another incredible turn. Katniss is more damaged than ever this time around and Lawrence wears all of that pain, regret, guilt and anger in every scene, without losing the steely resolve that has helped her survive this long.

For all it has going for it, it’s unfortunate that the film falters at the last hurdle with a finale that doesn’t quite know when to stop until it goes too far and shows too much. The clumsy coda is a disappointing misstep in an otherwise powerful, rousing send off to a brilliant franchise. 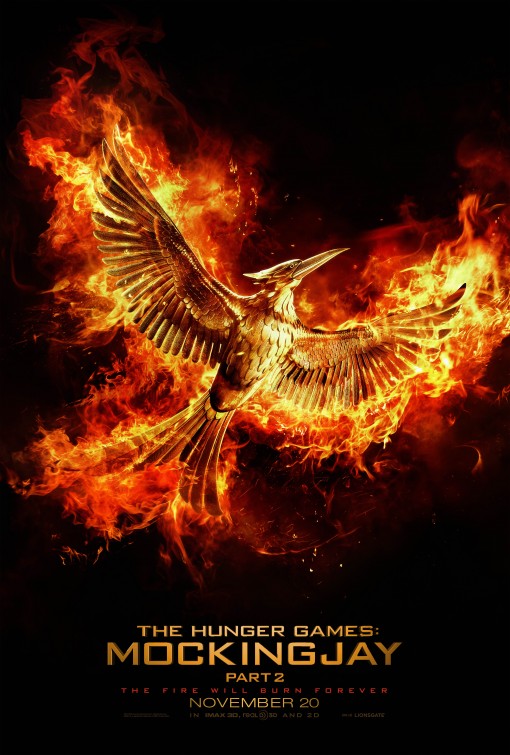