Four friends who have recently finished school head off to exotic Malia for the holiday of their lifetimes.

The transition from TV to the big screen isn’t always a smooth one, particularly for British comedies. For every Borat or In The Loop, there’s a Mr Bean’s Holiday or Ali G Indahouse. It is this patchy track record that makes The Inbetweeners Movie such a pleasant surprise as the four hapless teenagers make an effortless jump to the big screen.

The set up is simple: Will (Simon Bird), Jay (James Buckley), Neil (Blake Harrison) and Simon (Joe Thomas) have just graduated from high school and are set to move onto university or employment. When Simon’s beloved girlfriend Carli (Emily Head) dumps him, the boys embark on a lads holiday to Malia in search of sun, sea, booze and sex. However it isn’t long before a number of obstacles soon derail their dream holiday including a derelict hotel, hostile club reps and the arrival of Carli.

Hope soon arrives in the form of potential love interests Alison (Laura Haddock), Lucy (Tamla Kari), Lisa (Jessica Knappet) and Jane (Lydia Rose Bewley) who immediately pair off with Will, Simon, Neil and Jay, respectively. The addition of the four girls is definitely a welcome one with each lad’s own particular brand of courtship providing ample laughs throughout. With perhaps only Neil and similarly dim-witted Lisa, each budding relationship is handled well, with the confident, assured Alison slowly falling for Will’s bumbling charms, Simon actually finding a girl who likes him while all he can do is pine for Carli and Jay being stuck with ‘the fat bird’. Each girl is as well rounded a character as possible, each one more experienced and mature than their male counterpart, which brings a dimension that was often absent from the show.

One thing the show never lacked, however, was big laughs. The film provides these in abundance with a number of hilarious set pieces, including an inventive use of ham, a misplaced shit and a particularly pathetic fight scene. The hilariously vulgar one-liners are also ever-present, with the writers yet again perfectly replicating the kind of chat that will be all too familiar to anyone who’s ever been a teenage guy. The chemistry between the boys is effortless at this stage making their friendship seem entirely genuine and this allows the movie to underpin its crude laughs with some genuine emotion. There’s a certain end-of-an-era sadness present at times as the boys realise that life is inevitably going to pull them in different directions and they won’t be together for ever. One scene between Jay and Simon is particularly poignant as they discuss an ideal future that they both know, deep down, will never happen.

For avid fans of the show, The Inbetweeners Movie is a perfect send off for Will, Simon, Neil and Jay, with each one getting their chance to shine. For those who are unfamiliar with the series, the film still works well as a stand alone feature with some early exposition, albeit slightly clunky, helping out the uninitiated. The mix of raunchy humour and passage-of-time poignancy can draw comparisons to teen comedy standout Superbad. While The Inbetweeners Movie perhaps doesn’t quite reach those heights, it’s a strong teen flick, giving us one last laugh at the expense of these lads before they are thrust into the gaping clunge of adulthood. 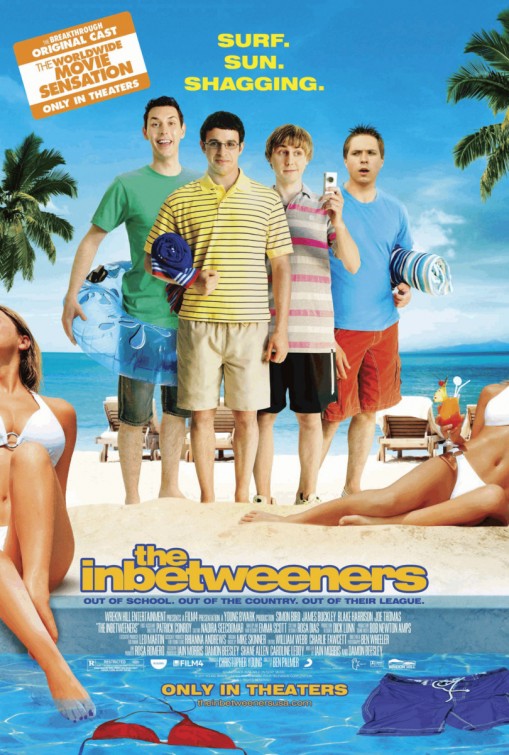