A lot can change in a decade. Back in 2003, Jim Carrey was at the peak of his commercial powers with a starring role in Bruce Almighty and Steve Carrell was the scene-stealing supporting player trying to make a name for himself in movies after some TV work. Fast forward to The Incredible Burt Wonderstone and Carrell is the comedy megastar and Carrey is on scene-stealing duty.

Carrell plays Burt Wonderstone, a permatanned Las Vegas magician who, along with his best friend Anton Marvelton (Steve Buscemi), has headed up a Sigfried and Roy-esque show at a swanky Vegas hotel for decades. Night after night, the two big-haired illusionists come out to the same cheesy music and pull off the same tricks to ever diminishing crowds. Not only has their act gotten stale but their old-school style is under threat from Steve Gray (Carrey), a David Blaine-style street magician whose ‘tricks’ amount to holding his urine for days at a time or sleeping on a bed of hot coals.

After an ill-advised attempt at copying one of Gray’s endurance stunts, Wonderstone and Marvelton have a massive falling out and their show is dumped by hotel owner Doug Munny (James Gandolfini). Cue some reluctant soul searching from Wonderstone who eventually finds himself on entertainment duties at an old folks’ home, where he comes across his idol Rance Holloway (Alan Arkin) and rediscovers his love of magic.

There’s nothing new or particularly intriguing about The Incredible Burt Wonderstone. The plot trajectory is easy to call from the opening scenes alone but there are enough laughs throughout to keep the film entertaining and likeable. Carrell is more often deployed as a sweet, naïve character but Wonderstone is a pompous man-child, the kind of character who wouldn’t look out of place on Will Ferrell’s filmography. Many of the best laughs come from the ludicrous theatrics of Wonderstone and Marvelton’s stage show and Carrell and Buscemi are both perfect in these scenes.

As good as Carrell is though, the film is stolen out from under him by two excellent supporting turns. Firstly, Alan Arkin is fantastic in the kind of uncensored old grouch role that he’s become known for in recent years. The real ace in the hole is Jim Carrey though. His recent filmography is very hit or miss and none of the films rank amongst the best of his career but he is clearly having a lot of fun here, giving the kind of over-the-top physical performance that we haven’t seen from him in a long time.

It’s a shame that there isn’t much for underdeveloped love-interest Olivia Wilde to do here though considering her comedic talents but she does what she can with an underwritten role.

Though it is slight and ultimately forgettable, at the time The Incredible Burt Wonderstone is a fun lark loaded with hilarious throwaway lines and sight gags. Carrell and Carrey share a goofy chemistry and there’s joy to be had from the ridiculous magic tricks on display, especially when they’re used in every day life, particularly in the magicians bar where the poor bartender is teased with generous tips and patrons are prone to floating out of the door. It’s not quite the Zoolander of the magic world but it isn’t far off. 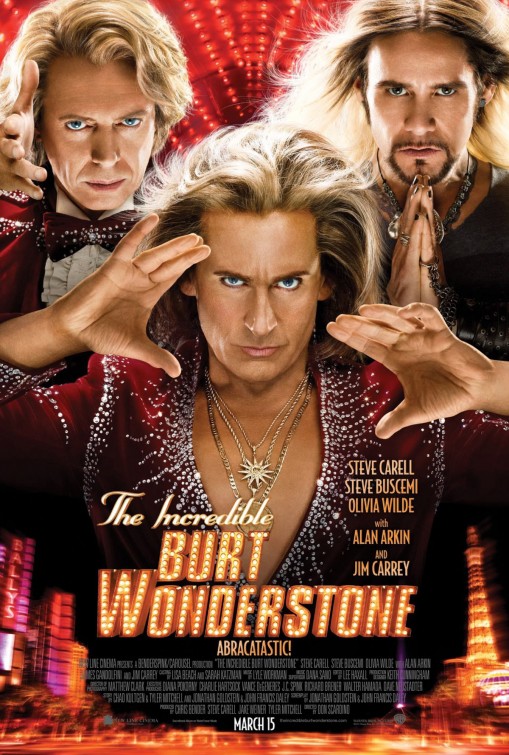