Nobody does white, middle-class people gently working out their problems in immaculate houses like Nancy Meyers. Her characters inhabit a world of shiny homes and even shinier offices, where every computer is a brand new Mac and every bed is covered in perfectly arranged throw pillows. This particular brand of frothy, easy-going comedy rankles with as many as it enchants and her latest effort The Intern doesn’t stray too far from that formula.

Inhabiting Meyers’ interior design dreamland this time around is Robert De Niro as Ben, a 70 year-old widower who had a successful career in business and is already bored of retirement. When he sees an opening for a ‘senior intern’ at an online fashion start-up in his Brooklyn neighbourhood, he jumps at the chance to get back into the working ranks. His new boss is Jules (Anne Hathaway), who started the company in her kitchen and has watched it grow into a hugely successful business with over two-hundred employees.

But she’s floundering. Things have gotten bigger than she planned for and she can’t do it all alone. The investors are pressing her to hire a seasoned CEO to steer the company in the right direction. Meanwhile her home life is feeling the strain with stay-at-home husband Matt (Anders Holm) struggling to cope with the workload of looking after their adorable young daughter Paige (JoJo Kushner).

That’s where Ben comes in. His old school practicality and sunny disposition make him an instant hit around the office but Jules is initially sceptical, especially once Ben is assigned to help her out. However, it isn’t long before his soothing influence wins her over and the pair strike up a friendship with Ben’s calm and experience helping Jules navigate her hectic life.

That is essentially what makes the film so watchable. There is no real conflict here, no antagonists out to hurt anyone, just a series of nice people trying to work things out. The biggest pleasure the film offers really is just watching Jules and Ben’s friendship grow: watching Jules learn about Ben’s life with genuine interest, seeing how Ben cares for Jules and wants her to succeed. Meyers doesn’t force any tension between the two and when it looks like she might – in a scene where Ben is transferred to another department as per Jules’ request before she got to know him – the characters work through it as people would: she apologises, he accepts and they move on.

Crucial to this is the casting. Hathaway is a dab hand at this light, frothy material and she nails it as you would expect her too, making Jules a sweet, sincere, vulnerable and intelligent woman that avoids most of the clichés the movies usually throw up around women in business.

That De Niro takes to the material so well is slightly more surprising but the veteran delivers his best performance in years and possibly his most likable, charming performance in, well, forever. He imbues Ben with a real dignity and warmth, completely convincing as someone who would have such an effect on those around him. It’s impossible to watch this film and not wish you knew someone like Ben.

The chemistry De Niro and Hathaway share is most on display in a wonderful hotel room scene that hits at the heart of one of the things Meyers is really getting at with this film: the perception that a woman must choose her family or her career and can’t possibly have both. Jules wonders why not, pushing back against the idea that in order to save her faltering marriage, she must bring in someone else to run her company.

There are also hints of this in scenes involving the other parents at Paige’s school who scoff at Jules’ career driven lifestyle but this isn’t the only thing that concerns Meyers. Through Ben she also looks at aging and the place of older people in society with Ben proving that, despite his advanced years, he still has plenty to offer and shouldn’t be ushered off into retirement and beyond.

So while it might not convert those who are usually repulsed by Meyers output, The Intern is a surprising delight that works primarily because of the chemistry of its two fantastic stars and the affable characters they portray. 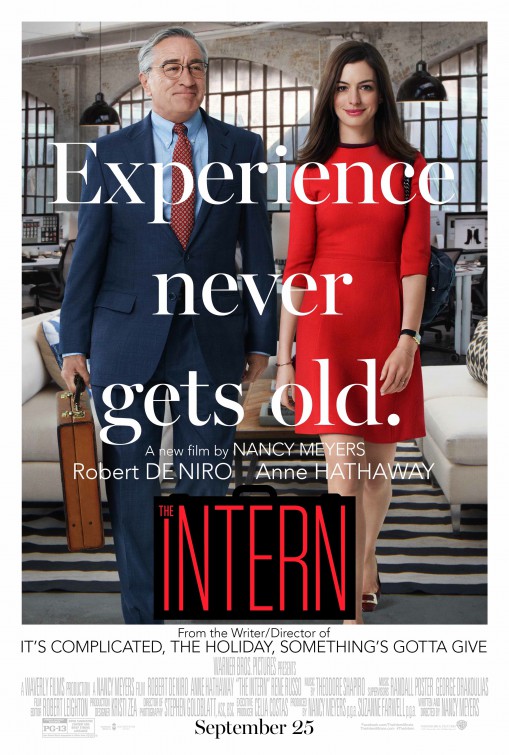