Across his 50-year career, the world of organised crime is one that Martin Scorsese has mined for some of his most successful films. It’s a world the director has often been accused of glamourising; even as the criminal protagonists of his films reach their inevitable downfall, the world they inhabit is undoubtedly seductive. It would be hard to level that charge at Scorsese’s latest, sprawling crime epic The Irishman. There is nothing seductive about the world of Frank Sheeran (Robert De Niro), a reliable mob hitman whose decades-long affiliation with the Bufalino crime family provides the centre of the film’s narrative.

Steve Zailian’s script, an adaptation of Charles Brandt’s novel I Heard You Paint Houses, takes Sheeran’s highly questionable recollection of this time and runs with it. Through a mixture of revolutionary de-aging technology and old-fashioned aging makeup, De Niro plays Sheeran from his early days as a hitman in the 1950s, all the way to the retirement home. It’s here that the film’s framing device sees Sheeran confess to the litany of crimes he committed in his life, including the part he had to play in the disappearance of his friend, and legendary Teamsters leader, Jimmy Hoffa (Al Pacino).

Sheeran as a central character is a change of pace from the likes of Henry Hill or Jordan Belfort, the charismatic coke-fiends at the centre of Goodfellas and The Wolf of Wall Street. Sheeran is more ordinary and workmanlike, a stoic professional who carries out violent killings with minimal fuss. Rather than charting his meteoric rise through the ranks of the mob, the film centres on the relationships Sheeran builds throughout his life, exploring the friendships he made with both Hoffa and Russel Bufalino (Joe Pesci), as well as the toll his career takes on his family life. As such, the film has a sombre, reflective tone that feels new for a Scorsese film set in this world, almost mournful as it follows Sheeran into an old age marred by loneliness and isolation, his friends gone and his remaining family estranged.

That’s not to say the film is by any means a downbeat drag; it is in many ways exactly the film you would hope he would make with this material, never lacking in humour or thrills, but the director manages to take it in a fresh and enthralling direction. At a whopping 209 minutes, the film might seem difficult or off-putting, particularly as it drops on Netflix and has to compete with any number of distractions. But even at such a length, the momentum never drops, building towards a powerful, moving finale that packs a real emotional punch.

At the centre of all of this is De Niro, who – a few gems aside – has been coasting for years now. Reuniting with Scorsese for the first time in 25 years, he seems reinvigorated, delivering a quietly powerful performance as a passive protagonist who is at the centre of all the action but rarely ever driving it. He plays Frank as a man of loyalty and professionalism, with a chilly exterior that masks a quiet internal anguish. On the flipside, Pacino is big and bold, giving a typically full-throated and blustery performance while imbuing Hoffa with intelligence and humanity. In a smaller role, Pesci never misses a beat in his return to acting, lending a charm and warmth to Bufalino that’s undercut by the coolly sinister way he conducts business, never batting an eyelid as he calmly orders hits in hushed tones and coded language.

Seeing these three actors sharing the screen and delivering such stellar performances is one of the many real pleasures of The Irishman, a film that’s packed full of them. It feels like an elegant capper to the career of both Scorsese and the key members of his cast, examining and reckoning with past work while delivering something thrilling and new. It takes in loyalty, corruption, family, legacy, and regret in a wintry epic that underscores its melancholy tone and chilling brutality with moments of real tenderness and poignancy. 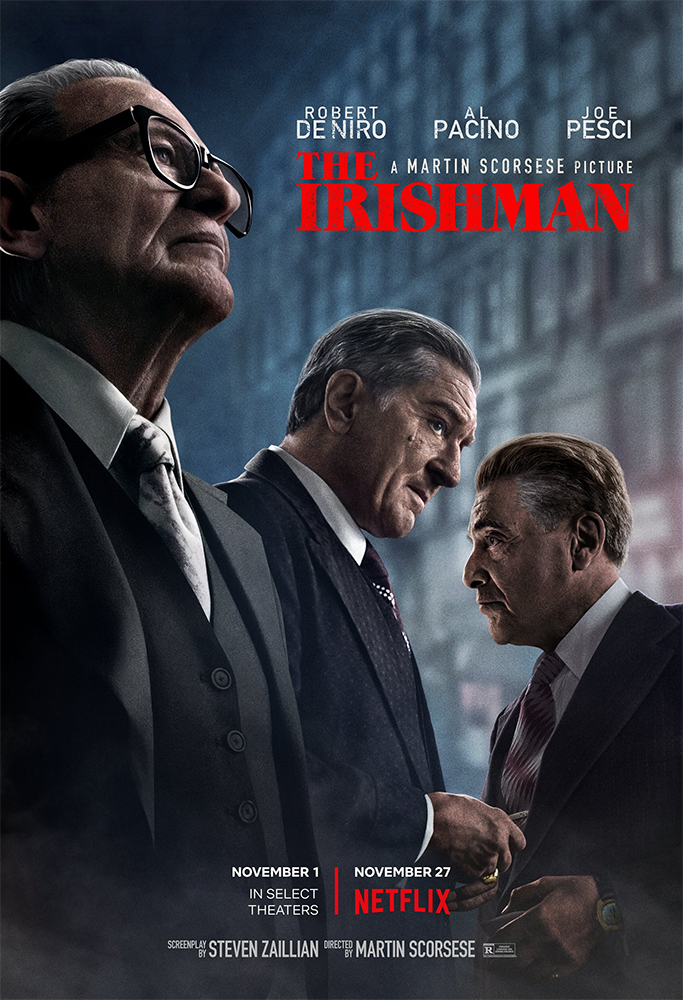